Bloodstock Latest BACK WITH A BANG 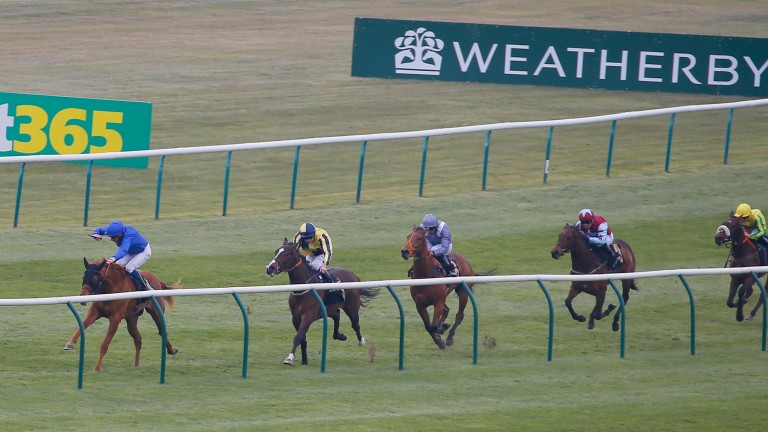 Following the example of Lady Kermit, who dotted up by six lengths at Kempton for Archie Watson this month, another daughter, Chasing Dreams, ran out a five-length winner of a 5f fillies' maiden on debut at Newmarket on Tuesday.

Chasing Dreams – who ran in a hood and beat into second Good Vibes, a daughter of Whitsbury Manor Stud freshman sire Due Diligence – is trained by Charlie Appleby for Godolphin after being purchased by Stroud Coleman Bloodstock for 750,000gns at Book 1 of the Tattersalls October Yearling Sale.

That price-tag made her by far the most expensive auction yearling in the northern hemisphere by Starspangledbanner, who stood at Coolmore from 2016 to 2018 at €15,000 and had his fee increased to €17,500 this year.

She is the second winner out of her dam, the Listed-placed Refuse To Bend mare A Huge Dream, after the dual Listed winner Mrs Gallagher (by Oasis Dream). The mare also has a Dark Angel yearling colt and returned to that sire last year.

A Huge Dream is a half-sister to Vintage Stakes winner and Dewhurst third Xtension, later a dual scorer in the BMW Champions' Mile in Hong Kong, and to Beatrix Potter, the dam of champion sprinter Harry Angel, who is standing his first season at Dalham Hall Stud.

Appleby, who also won last year's renewal of the maiden with the subsequently Listed-placed Strings Of Life, reported after Chasing Dreams bolted up: “[She's] a different level of filly to the one we brought here last year. We'll put her away now until Royal Ascot.”

Chasing Dreams looks a likely contender for the Queen Mary Stakes, a race won by Starspangledbanner's daughter Anthem Alexander in 2014. Anthem Alexander was one of two winners at the royal meeting that year from the sire's first crop of just 33 foals, depleted by subfertility, with The Wow Signal also taking the Coventry.

Starspangledbanner, a well-bred son of Choisir who won the Caulfield Guineas and Oakleigh Plate in his native Australia and completed the Golden Jubilee Stakes and July Cup double after joining Aidan O'Brien, has experienced a remarkable upturn in fertility in recent years.

Having remained at stud in Australia in 2013 and 2014 and missed the shuttle trip to Coolmore in Ireland in 2015, in the wake of the juvenile exploits of Anthem Alexander and The Wow Signal, due to a bout of colic, he finally returned to Coolmore in 2016.

Weatherbys records the 120 mares covered by him in the northern hemisphere that season having produced 70 foals who are now two-year-olds.

As well as Chasing Dreams and Lady Kermit, that crop has also given us the promising Brocklesby Stakes fourth Dorchester Dom.

Starspangledbanner ready to write next chapter in his remarkable tale

Doyle Force: Creative rider off the mark for the week as Appleby bags a 1-2 'Challenging horse' Kemari solves his trickiness puzzle with impressive success From subfertile to sire sensation: how Starspangledbanner has defied the odds 'He's a horse we like a lot' - Roger Varian could hold key to big-field handicap Hong Kong adds voice to controversy over latest British racing start confusion Mohaafeth bidding for redemption for William Haggas after late Derby withdrawal