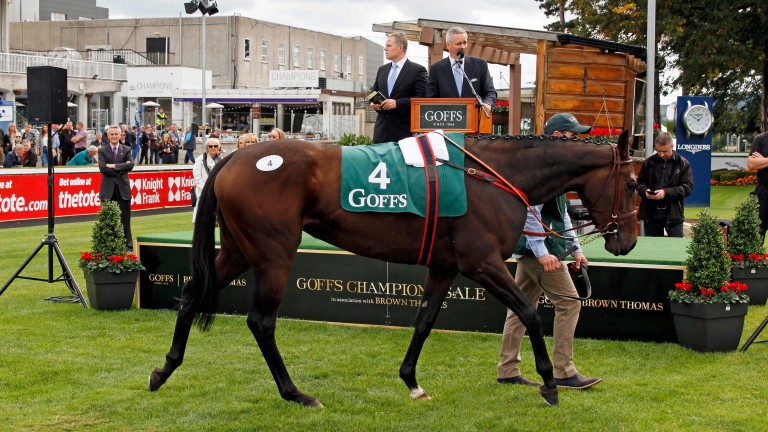 A new record was set for the Goffs Champions Sale with Goffs UK managing director Tony Williams bidding €500,000 on behalf of Sun Bloodstock in Australia for Group 3-winning filly Cimeara.

Offered by Jim Bolger's Glebe House Stables, the Vocalised filly topped the sale, held in association with Brown Thomas, which took place in the parade ring before the start of racing at Leopardstown on Saturday - the first day of Irish Champions Weekend.

Williams said of the filly: "They were delighted to be able to buy her, to buy into a proper pedigree like hers and a mare that's got a lot of racing potential ahead of her in staying races."

"At this stage, she'll go back to Jim Bolger and is likely to stay up here, but they're still deciding on her future. She'll certainly be one of the high-ranking mares in their bloodstock portfolio."

Cimeara - who won a mile maiden on debut last October - has improved for being stepped up in trip as a three-year-old and is no stranger to Leopardstown, having won the Group 3 Stanerra Stakes over 1m6f and dead-heated in a Listed race over the same distance there on her two most recent starts.

Formally known as Eliza Park International, the Hong Kong-owned Sun Bloodstock stands a number of stallions at its Sun Stud in Victoria including Melbourne Cup hero Fiorente and Black Caviar's sire Bel Esprit. The Irish National Stud's National Defense, who won the Prix Jean-Luc Lagardere in the operation's yellow and red silks, had been due to shuttle this year but those plans were shelved due to injury.

Michael O'Callaghan, who has quickly established himself among the Irish training ranks, sold three lots on the day for a total of €640,000 including the second most expensive lot Angelic Light, who is declared for the Moyglare Stud Stakes on Sunday.

The twice-raced Dark Angel filly was an impressive winner of a 20-runner maiden at the Curragh on her second start two weeks ago, and was sold in absentia to Bill Dwan, on behalf of BAA.

O'Callaghan also sold Carbon Fibre, who was a game runner-up to Ten Sovereigns on his second start in a 25-runner maiden at the Curragh, for €250,000 to George Moore Bloodstock in Hong Kong.

Henry Beeby, chief executive of Goffs Group, said: "A new record price of €500,000 and sales to both Australia and Hong Kong as well as the National Hunt fraternity demonstrate the international and diverse appeal of the Goffs Champions Sale."

FIRST PUBLISHED 3:51PM, SEP 15 2018
At this stage, she'll go back to Jim Bolger and is likely to stay up here, but they're still deciding on her future