Catholic Boy retired from racing to be installed at Claiborne Farm 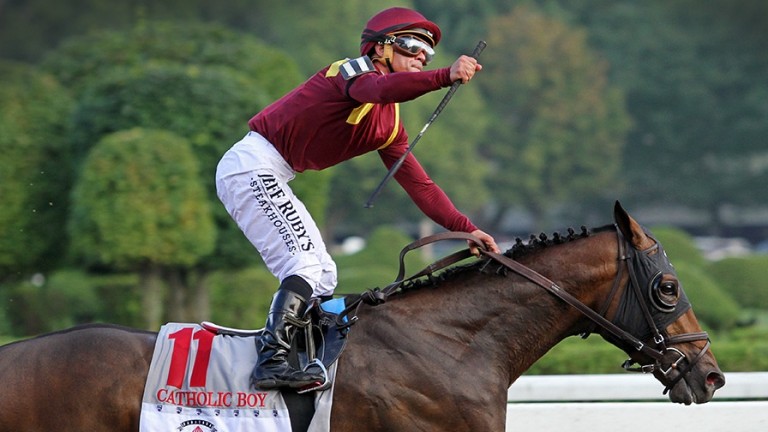 Dual-surface Grade 1 winner Catholic Boy has been retired from racing and will join the stallion roster at Claiborne Farm in Kentucky, according to farm representative Bernie Sams.

The multimillionaire son of More Than Ready will enter stud next year at $25,000 with a live foal stands and nurses guarantee.

A six-time graded stakes winner, Catholic Boy was only the third American three-year-old in history to win a Grade 1 race on both dirt and turf, joining the elite company of the great Secretariat. Those victories came in the Travers Stakes and Belmont Derby Invitational Stakes in 2018.

A hard-knocking ridgling who raced for three seasons and travelled to nine tracks, Catholic Boy started his career on the turf at Gulfstream Park, where he won first time out going seven and a half furlongs. He went straight into Graded stakes company from there and passed the test in the With Anticipation Stakes on the turf at Saratoga Race Course.

He capped his juvenile season with his debut on dirt, winning the Remsen Stakes at Aqueduct Racetrack.

At three, he went on to prove his versatility, returning to the turf to take the Pennine Ridge Stakes in a thriller over previously undefeated Analyze It. The two renewed their rivalry in the Belmont Derby, with Catholic Boy emerging victorious again.

He further proved he was among the top of his crop when he returned to the dirt to win the Travers Stakes at the classic 1m2f distance. When he returned at four, Catholic Boy added the Dixie Stakes to his résumé, going 1m½f on turf at Pimlico Race Course.

More Than Ready has sired versatile runners worldwide, with Grade 1 winners in seven countries. Bred in Kentucky by Fred Hertrich III and John Fielding, Catholic Boy is out of Song Of Bernadette, a daughter of rapidly rising broodmare sire Bernardini.

The mare was bought by Hertrich for $140,000 out of Lantern Hill Farm's consignment at the 2013 Keeneland November Breeding Stock Sale. Lantern Hill sold Song Of Bernadette for breeder Highfield Farm.

Catholic Boy is Song Of Bernadette's second foal. He was offered at the 2016 Keeneland January Horses of All Ages Sale by Taylor Made Sales Agency and was bought back on a final bid of $170,000.

Song Of Bernadette was sold in 2018 at The November Sale, Fasig-Tipton's mixed sale, in foal to War Front for $2.3 million to Bridlewood Farm by Taylor Made Sales. That mating produced a colt this year, and the mare was bred back to Quality Road.

FIRST PUBLISHED 11:48PM, OCT 19 2019
Catholic Boy was a hard-knocking ridgling who raced for three seasons and travelled to nine tracks