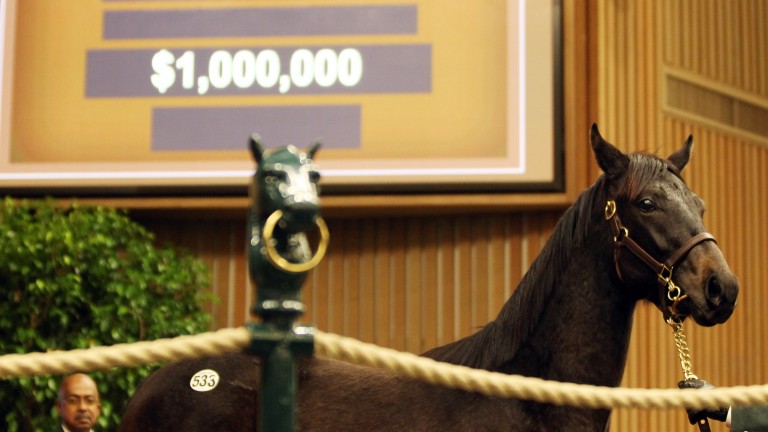 Caravaggio's half-brother Hong Kong at the Keeneland January Sale
Photos by Z/Keeneland
1 of 1
By Ollie O'Donoghue 1:47PM, MAY 16 2019

Caravaggio's half-brother Hong Kong will become the first British runner for US Triple Crown hero American Pharoah, when the $1 million colt lines up in a 6f maiden stakes at York on Thursday.

Trained by Aidan O'Brien for the Coolmore partners, the February-foaled youngster was the most expensive yearling sold at last year's Keeneland January Sale when signed for by MV Magnier, and will be the mount of Ryan Moore.

Bred by Windmill Manor Farms and partners, Hong Kong - whose name was briefly changed to Kentucky Bluegrass - is one of seven named foals out of Listed-winning sprinter Mekko Hokte, a Holy Bull mare whose brood also includes the Grade 2 handicap scorer My Jen.

Caravaggio, who retired to Coolmore Stud in Ireland last year at a fee of €35,000, is her most accomplished performer, with the son of Scat Daddy having won the Coventry and Phoenix Stakes at two and the Commonwealth Cup and Flying Five Stakes at three.

American Pharoah has supplied two first-crop winners to date, with the O'Brien-trained Derby entry Monarch Of Egypt, who was formerly named Horus Bird, opening his account in convincing style at Naas last month.

Monarch Of Egypt races in the colours of Peter Brant and the Coolmore partners having been acquired for $750,000 at last year's Keeneland September Yearling Sale.

Frankel posts a pair of promising new winners at Killarney

FIRST PUBLISHED 4:55PM, MAY 15 2019
Bred by Windmill Manor Farms and partners, Hong Kong is one of seven named foals out of Listed-winning sprinter Mekko Hokte