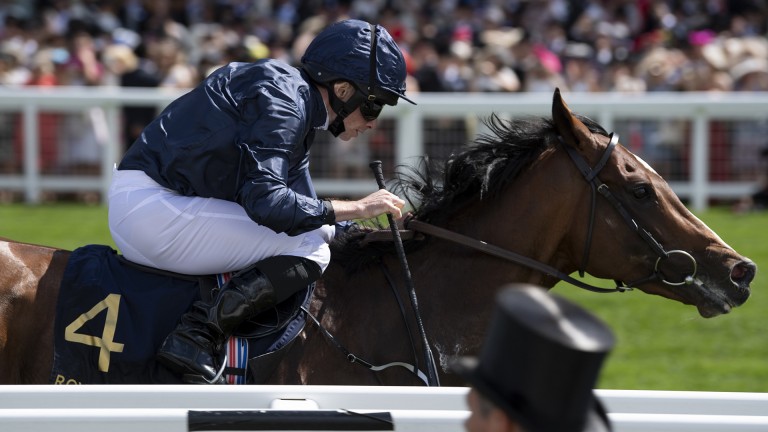 Crossed Baton (by Dansili) was a game second, with Zaaki (Leroidesanimaux) and Vintager (Mastercraftsman) completing the frame. The victory was also significant for the fact it was Ryan Moore's 50th win at the royal meeting.

Bred by Lynch-Bages and Rhinestone Bloodstock, Hunting Horn hails from a family Coolmore know well, as the colt is one of five winners out of the unraced Indian Ridge mare Mora Bai, who also produced the 2011 Beresford Stakes scorer David Livingston, who like Hunting Horn was trained by Aidan O'Brien for the Coolmore partners.

Hunting Horn is from a family the 'lads' know in detail, as they bought High Chaparral, a year-older half-brother to Mora Bai, for 270,000gns at the Tattersalls Houghton Sale in 2000 from Mountain View Stud before his Derby heroics two years later.

Both were bred by Sean and Anne Coughlan, who also raced classy sprinter Indian Ridge - later standing him at stud - and his son Ridgewood Pearl, a top-class miler who landed the 1995 Breeders' Cup Mile at Belmont Park.

With such a strong middle-distance pedigree, it was therefore not surprising that Hunting Horn broke his maiden over the 1m2f Hampton Court trip at Naas in April.

Interestingly, the other two Royal Ascot winners to be bred from daughters of Indian Ridge are sprint sensations Kingsgate Native and Profitable.

Hunting Horn's win helped Camelot consolidate his position at the top of the European second-season sire standings, with 41 winners and progeny earnings nearing the £1 million-mark giving him a clear lead.

Complete pedigree analysis for all the big Royal Ascot races:

US breeding tops the bill in Norfolk Stakes thriller