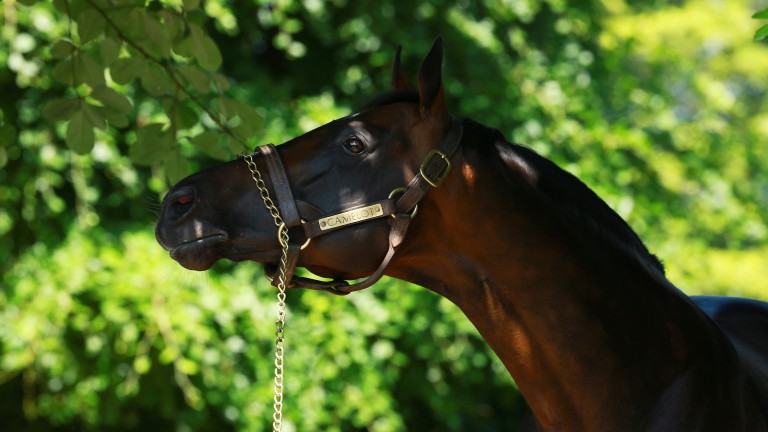 Camelot: son of Montjeu is making a name for himself with his early crops
Coolmore
1 of 1
By Martin Stevens 6:11PM, APR 29 2019

Southwell was the scene of an eye-popping debut by a seemingly unfancied Camelot three-year-old gelding on Monday.

Starting at odds of 33-1 and taking on two previous winners and a number of opponents who had already run with promise, Alexander James took up the running four furlongs from home in the mile novice stakes and was pushed clear from two furlongs out to win unchallenged by 13 lengths.

Alexander James is trained by Iain Jardine for James Property Ltd, having originally been knocked down to Mark Johnston for 32,000gns at Book 2 of the Tattersalls October Yearling Sale in 2017.

He was bred by Churchtown House Stud and is the second foal out of the Hard Spun mare Plying, a dual winner over 6½f and 7f in France for Henri-Alex Pantall and Sheikh Mohammed.

Plying, a nine-year-old half-sister to Flying Childers Stakes third Kissing Lights from the family of Solario Stakes winner Raise A Grand, was originally a $200,000 Saratoga yearling purchase by Mark Johnston but was disposed of by Darley for just €12,000 at the Arqana December Sale of 2013, when BBA Ireland was the buyer.

Plying changed hands again at last year's Goffs November Breeding-Stock Sale, with Jossestown Farm paying €21,000 to secure her when in foal to Starspangledbanner - a sire in a rich vein of form with his two-year-old runners in the early days of the 2019 Flat season.

He has been represented by two promising winners in Ireland in recent days, with the Aidan O'Brien-trained Pink Dogwood stamping her Investec Oaks claims with victory in the Listed Salsabil Stakes at Navan and stablemate Sir Dragonet scoring by three lengths on debut in a Tipperary maiden.

Alexander James was not the only unexposed three-year-old to register a wide-margin score at Southwell on Monday.

Ranch Hand, a Dunaden gelding trained by Andrew Balding for owner-breeder Kingsclere Stud, made it two wins from two starts by putting 12 lengths between himself and his closest rival in a 1m3f novice median auction stakes.

He is a half-brother to winners Cape Victoria and Victoria Pollard out of Victoria Montoya, who was a Listed-placed stayer in her own racing career and is a half-sister to several horses who carried the Kingsclere Racing Clubs silks – those inherited from Paul Mellon and carried by Kingsclere's most famous resident, Mill Reef – with distinction including Passing Glance and Scorned.

Barronstown Stud's penchant for a proven producer pays off again