Calumet restoration gains momentum as three run for the Roses

Historic farm's big-spending owner aiming to bring back past glories 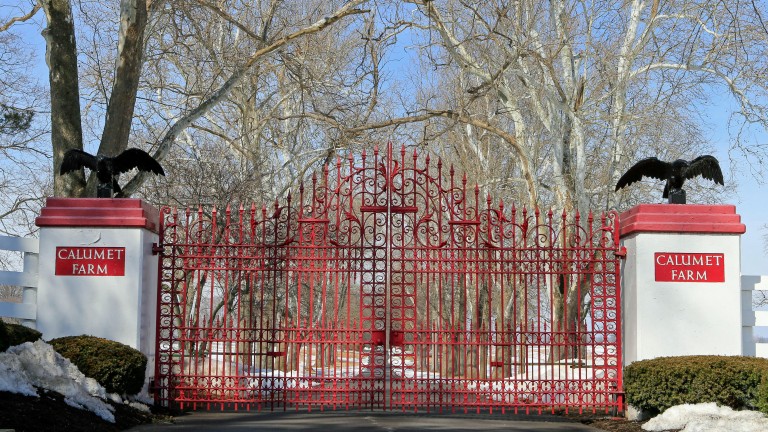 Calumet - the mystique of the name almost seems inlaid with that of Camelot. Eight Kentucky Derby winners in the devil’s-red-and-blue silks between 1941 and 1968. Eight, and all homebred. (The next on the all-time list has four.) These included Whirlaway and Citation, both Triple Crown winners. For two generations after 1931, when inherited by the heir to the Calumet Baking Powder Co fortune, this was the Bluegrass State’s ultimate blue-chip brand.

But then came a catastrophic unravelling, the sepia of a golden age dispersed by a stark and sordid worldliness: fraud, bribery, prison sentences. And if nobody ever proved the conspiracy theories, as aired in courts and print, the haunting death of Alydar certainly completed the poisoning of the Calumet romance. The farm’s last great racehorse would not be remembered for his timeless track rivalry with Affirmed, but for a grotesque debate over his final hours in 1990.

Alydar had just had the Horse of the Year - Criminal Type, of all names - and would also be responsible for the 1991 Kentucky Derby winner in Strike The Gold. That colt had been cashed in as debts mounted, however, and the farm filed for bankruptcy within weeks of his new owners striking gold at Churchill Downs.

But the legend of Camelot proposes a “once and future king”. And, with no fewer than three homebreds lining up for the Kentucky Derby on Saturday, the new regime at Calumet could scarcely have made a greater statement about its determination to renew its former glories.

None of the trio looks a budding Citation; and nor can anyone sensibly hope that even a roster of 19 stallions might contain one quite as potent as his sire, Bull Lea. But if the man driving the Calumet revival has an Arthurian elusiveness, there is no mistaking his sense of heritage.

Brad M Kelley, the reclusive tobacco and media billionaire who has presided at Calumet since 2012, is not only a conservationist - a happy state of affairs, in itself, as one reported to be the fourth biggest private landowner in the US - but also appears determined to preserve the eroded bedrock of the Classic thoroughbred.

For no less than the iconic red trim on the historic barns, the red gates between spread-eagle gateposts, the 35 miles of white post-and-rail, Kelley has identified a deep grain of Triple Crown durability, pedigree and stamina as integral to the Calumet legacy.

After the bankruptcy of the old firm, Calumet was saved from real estate developers in 1992 by a trust set up by Henryk De Kwiatkowski. But the farm was unable to muster a single Kentucky Derby candidate until sold on by its rescuer’s heirs for $35.9 million in 2012.

Kelley, as the new tenant, won the Preakness the following year with Oxbow - aptly enough, restoring another faded Turf legend in D Wayne Lukas. But Oxbow had essentially been acquired for Kelley’s existing operation and it is only this year that he can start to measure the dividends of the investment he made in fresh stock for Calumet - reckoned, in one account, at 382 horses at an aggregate $37.2 million.

Auspiciously all three Derby colts result from the 2013 groundwork of Kelley and his team. If a couple are outsiders, they too had to earn their berths under the points system and Kelley stands to become only the second owner since 1946 with three starters in the Run For The Roses.

The most realistic hope appears to be Hence, a son of Street Boss trained by Steve Asmussen and a decisive winner of the Sunland Derby. He was purchased in utero with his dam Floating Island for $55,000 at the Keeneland November Sale. Like dozens of Kelley’s other broodmare targets, Floating Island is a daughter of A.P. Indy. She is also a half-sister to the dam of dual Canadian champion Marchfield, who was by the same sire. The third dam, the Northern Dancer mare Aladancer, is found in a variety of good international pedigrees, including those of Equiano and New Zealand champion fillies King’s Rose and Anabandana.

It would be quite something for a Kentucky Derby winner’s dam to have since produced a filly by Risque Remarque, a black and white paint stallion in Arizona, as is apparently the case with Floating Island. But the fact is that his Sunland form has worked out extremely well and Hence is drilling sharply at Churchill Downs.

Patch is also out of an A.P. Indy mare, Windyindy, and again shows Kelley’s taste for a robust pedigree. He is from the first crop of another Belmont winner in Union Rags, while Windyindy - already dam of a Grade 2 winner by Tiznow - is herself out of a sister to Unbridled’s five-time Grade 1 winner Banshee Breeze. (This is also the family of that classy Juddmonte filly, All At Sea.)

Patch is very raw for a Derby, having finished well for second in the Louisiana Derby on his solitary start outside maiden company. But he is causing more curiosity at Todd Pletcher’s barn on account of the hollow cavity where his left eye should be, having lost it to an infection last summer.

Sonneteer is actually still a maiden after ten starts but strong finishes in both the Rebel Stakes (runner-up at 112-1) and the Arkansas Derby would otherwise qualify him as a wiseguy candidate to pick up the pieces if this turns into a stampede. Indeed, trainer Keith Desormeaux has been comparing him to his 1998 winner, Real Quiet, who took seven starts to break his maiden and was even twice beaten at Santa Fe, New Mexico. Curiously, despite his relentless closing style, Sonneteer is a son of the sprinter Midnight Lute out of a half-sister to the Grade 1 Hopeful Stakes winner Dublin.

You get an apt sense of Kelley’s agenda from the cosmopolitan profile of the stallions he has assembled at Calumet, bringing in sturdy and diverse bloodlines from as far afield as Brazil and Germany. (Not to mention these islands: ever wonder what had happened to Red Rocks, or Grey Swallow?) There is even a Melbourne Cup winner, in Americain. The indigenous stock, moreover, have either tended to put Classic runs on the board - Oxbow himself, for one, by one Breeders’ Cup Classic winner, Awesome Again, out of a sister to another in Tiznow; or Smarty Jones; or Point Given - or promoted an ability to gallop on grass, like English Channel or Big Blue Kitten. (That hasn’t stopped English Channel siring a Travers winner.)

Kelley has persevered with his own black and gold, the signature Calumet silks having been bought by a Brazilian businessman at the bankruptcy auction. They cost $12,000 shortly before De Kwiatkowski had to pay $210,000 just to use the Calumet Farm name. In every other respect, however, there is an edifying sense that the place is returning to its roots. Calumet has found its knight in shining armour.

FIRST PUBLISHED 7:25PM, MAY 1 2017
Kelley stands to become only the second owner since 1946 with three starters