California Chrome to stand at $35,000 next year

Taylor Made Stallions issue their prices for 2019 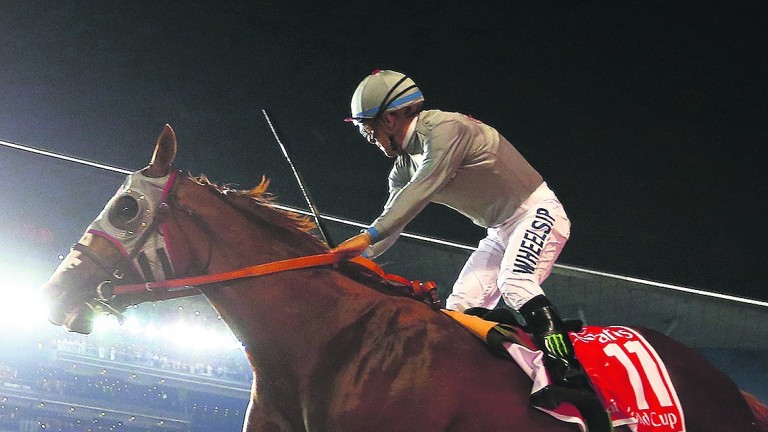 Taylor Made Stallions has set its 2019 stallion roster and fees, led by two-time Horse of the Year California Chrome, who will stand the upcoming breeding season for $35,000.

California Chrome, a seven-time Grade/Group 1 winner of $14,752,650, scored his biggest victories in the Kentucky Derby and Preakness Stakes as a three-year-old, and in the Dubai World Cup Sponsored Pacific Classic Stakes as a five-year-old.

The son of Lucky Pulpit won 14 stakes, including ten Graded/Group stakes, from 27 starts. His first in-foal mares sold up to $250,000 last year at the Keeneland November Breeding Stock Sale, and he has his first foals at auction this year.

Not This Time also has his first weanlings at auction this year and was represented by a $100,000 colt at the Saratoga Fall Sale, Fasig-Tipton's auction of foals and broodmares this month.

Not This Time is a half-brother to Breeders' Cup Dirt Mile winner Liam's Map. His fee remains unchanged at $15,000.

Mshawish and Midnight Storm will both stand for $10,000. Mshawish is top sire Medaglia D'Oro's only Grade 1 winner on both dirt and turf, and is his fastest dirt miler. He won five Grade/Group stakes, including back-to-back wins on dirt in the Donn Handicap and Hal's Hope Stakes. He also has first weanlings this year.

Midnight Storm is a brilliantly fast Grade 1 winner from North America's hottest sire-line. The son of Pioneerof The Nile is a seven-time Graded stakes winner with victories in the Shoemaker Mile Stakes on turf and the San Pasqual Stakeson dirt en route to career earnings of $1,783,110. He also placed in the Breeders' Cup Mile.

Midnight Storm stood his initial season at stud this year, and his first foals will arrive in 2019.

Graydar, a top-ten second-crop sire, rounds out the roster at a fee of $7,500. The son of Unbridled's Song earned Grade 1 status in the Donn Handicap and is the sire of graded stakes-winning three-year-old colt Lombo, winner of the Robert B Lewis Stakes; two-year-old stakes winner The Gray Dehere; and stakes-placed winners Aggregator, Arazi Like Move, and Palladium.