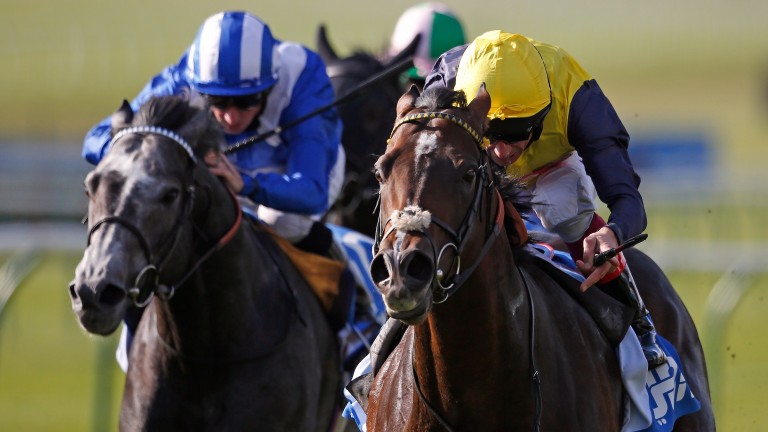 Indigo Balance, an Invincible Spirit brother to Group 2 scorer Cable Bay, is among the debutants bidding to shed their maiden in this 6f contest.

Cable Bay got off the mark in June of his own two-year-old season, and went on to win the Group 3 Jury Stakes and the Group 2 Dubai Challenge Stakes at four for trainer Charlie Hills. Cable Bay, who now stands at Highclere Stud, is represented by his first crop of yearlings this year.

Indigo Balance was bred by the Irish National Stud out of the placed Diktat mare Rose De France, which also makes him a half-brother to the winners May Rose and to Sea Wolf - the winner of six races in Great Britain and Ireland who later went on to finish second in an Australian Group 3.

Rose De France is out of the dual Group 1-winning sprinter Cherokee Rose and is a half-sister to the Group 3-winning Bowman and to Moyesii - the dam of the Group 1-winning siblings Kirkless and Mastery. Moyesii is also the dam of Magic Tree who produced Coral-Eclipse winner, and first-season sire, Mukhadram.

Offered at last year's Goffs Orby Yearling Sale by the Irish National Stud, BBA Ireland went to €155,000 to secure Indigo Balance, who is trained by Jessica Harrington and owned by Zhang Yuesheng of YuLong Investments.

The field of eight includes two who have racecourse experience under their belt and of the pair the one that catches the eye most is Land Force.

Trained by Aidan O'Brien, the son of freshman sire No Nay Never is a half-brother to dual Grade 1 winner Photo Call and is out of a half-sister to Irish 1,000 Guineas heroine Halfway To Heaven, who in turn is out of dual Group 2 winner Cassandra Go.

He was last seen finishing third behind Dadoozdart at Naas last month and is also a graduate of the Orby Sale in 2017, having been bought by MV Magnier for €350,000.

Big in Japan - and now everywhere else too: Deep Impact and co go global

FIRST PUBLISHED 2:54PM, MAY 11 2018
The two-year-old was bred by the Irish National Stud out of the placed Diktat mare Rose De France