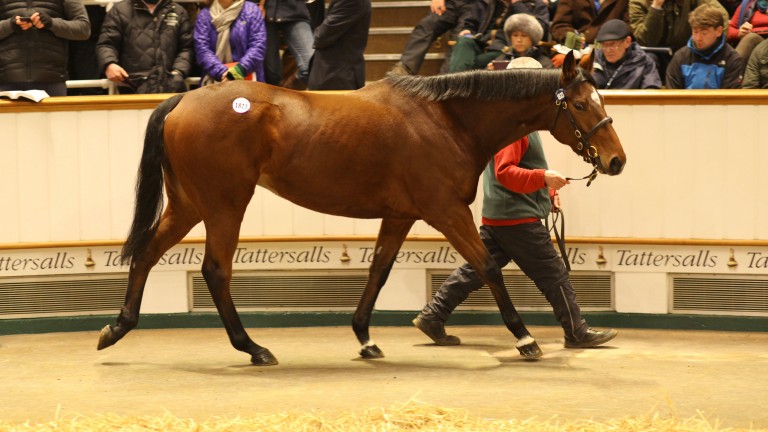 Jack Naylor: in the ring and selling to London Thoroughbred Services at Tattersalls on Tuesday
Laura Green
1 of 1
By Martin Stevens 2:12PM, NOV 30 2016

Gerry Byrne achieved every small owner's dream when he sold his €10,500 yearling purchase Jack Naylor for a cool 800,000gns at Tattersalls on Tuesday.

The daughter of Champs Elysees, who carried Byrne's silks to win twice at Group 3 level and finish placed in the Prix Marcel Boussac and Irish Oaks, was bought by James Wigan.

Byrne took to the bar with trainer Jessica Harrington to toast the success, which had a poignant edge.

"I wanted a colt to name in honour of my grandson, who passed away in 2013," he said. "Jessie found a filly but we still named her in honour of him and Jac Naylor, a bitchy character in Holby City. Luckily the filly wasn't bitchy at all!

"She gave us some unforgettable times on the racecourse that I'll probably never see again. I've had around 11 horses with Jessie but she was by far the best.

"I'll probably reinvest, but it will be in something cheap and cheerful. The trainer is already twisting my arm!"

Byrne, who owns a finance company, was selling because he does not breed horses. "Only the odd greyhound!"

Harrington uncovered Jack Naylor for the bargain price at Tattersalls Ireland and she said: "Gerry had given me a budget of €12,000 for a colt but I found her instead - she was small but very well made and a great walker, very well balanced."

FIRST PUBLISHED 2:09PM, NOV 30 2016
She gave us some unforgettable times on the racecourse that I'll probably never see again