Leslie's Lady has been confirmed in foal to American Pharoah 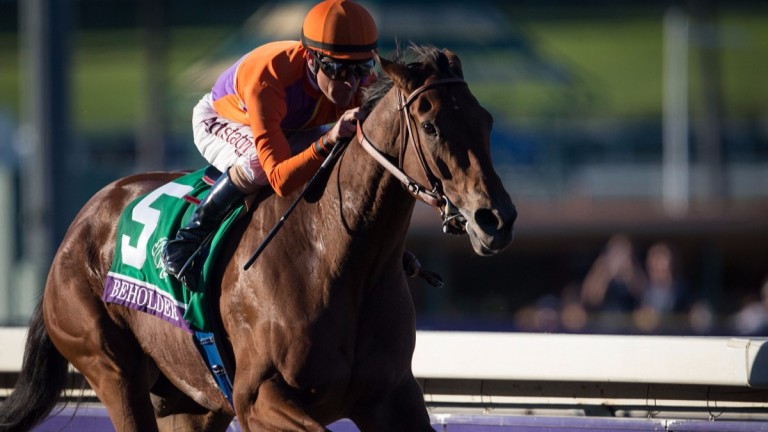 Beholder: remarkable racemare won three times at the Breeders' Cup including two victories in the Distaff
Wendy Wooley/EquiSport Photos
1 of 1
By Ollie O'Donoghue 4:02PM, MAY 24 2017

Leslie's Lady, the dam of three-time Breeders' Cup winner Beholder, not only looks set to have a debut runner at the Curragh on Sunday, but has also been confirmed in foal to US Triple Crown and Breeders' Cup Classic hero American Pharoah.

Leslie's Lady, a 21-year-old daughter of Tricky Creek, has already produced two top-class runners in Beholder and Into Mischief, both of whom were trained by Richard Mandella.

Beholder, a daughter of Henny Hughes, has shown plenty of durability in her racing career and was last seen regaining her Distaff crown at Santa Anita in November. She had previously won the race in 2013, a year after she jumped onto the US racing scene with a win in the Juvenile Fillies.

The mare has recorded an incredible 11 top-flight wins, with 18 victories from 26 starts. She was awarded an Eclipse as champion filly or mare in the US in four of her five racing seasons to date.

Into Mischief showed as much early speed as Beholder, winning the Grade 1 Futurity Stakes at Hollywood Park as a juvenile and the Grade 1 Malibu Stakes at three.

The son of Harlan's Holiday has begun to make a name for himself at Spendthrift Farm, and he currently stands at a career-high fee of $75,000, having been responsible for the dual Breeders' Cup Mile scorer Goldencents.

Leslie's Lady could also have a first runner at the Curragh on Sunday, with her Scat Daddy colt Mendelssohn entered for a 6f maiden for two-year-old colts and geldings.

Even before Beholder had won the distaff for a second time, MV Magnier went to $3 million to secure Mendelssohn as a yearling at last year's Keeneland September Sale, making him the auction's top lot.

FIRST PUBLISHED 4:02PM, MAY 24 2017
Leslie Lady's $3 million colt Mendelssohn has also been entered for the Curragh on Sunday