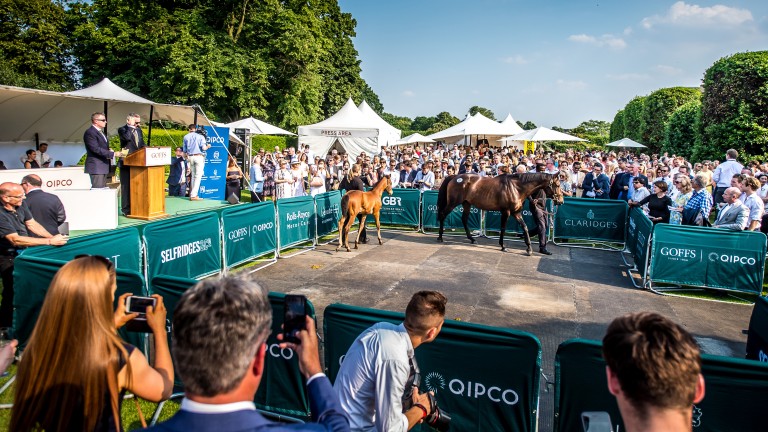 It's no secret that Bungle Inthejungle has made a blistering start to his stallion career and at Monday's Goffs London Sale, buyers will have the chance to snap up one of his most exciting prospects in Country Rose.

The Ron Harris-trained filly is one of 11 individual European winners for the Rathasker Stud resident and she made all to win at Lingfield earlier this month to get her career up and running at the third time of asking.

With an entry in the Group 2 Queen Mary Stakes on Wednesday, Country Rose is one of 22 horses who will be offered at the London Sale with entries at Royal Ascot.

Other late additions to the catalogue are the Archie Watson-trained Rockin Roy, who got off the mark last month and is entered in the Windsor Castle Stakes; Shine So Bright, the winner of his debut last Sunday at Nottingham and is being pointed to the Coventry Stakes on Tuesday, and the Johnny Murtagh-trained Yolo Again who was successful at Navan and is aimed at the Queen Mary Stakes.

The first three lots to go under the hammer on Monday will be breezers comprising of a colt by Acclamation, a filly by Distorted Humor and a colt by Violence.

Henry Beeby, group chief executive of Goffs, said: “We're very pleased with the depth and strength of the catalogue ahead of Monday with a strong number of horses-in-training entries that could run at the royal meeting.

"The three select breeze-up two-year-olds reintroduce that dimension to the sale and should appeal to a range of buyers, while the very select breeding stock complete the elite catalogue.

“Goffs London Sale is the perfect curtain raiser to Royal Ascot and since its inception in 2014 has grown in popularity and has attracted significant new investment into the British and Irish bloodstock industry. We are hopeful for a strong renewal as we celebrate its fifth year."

FIRST PUBLISHED 3:34PM, JUN 14 2018
We're very pleased with the depth and strength of the catalogue ahead of Monday