The unbeaten colt was bought in utero for just €11,000 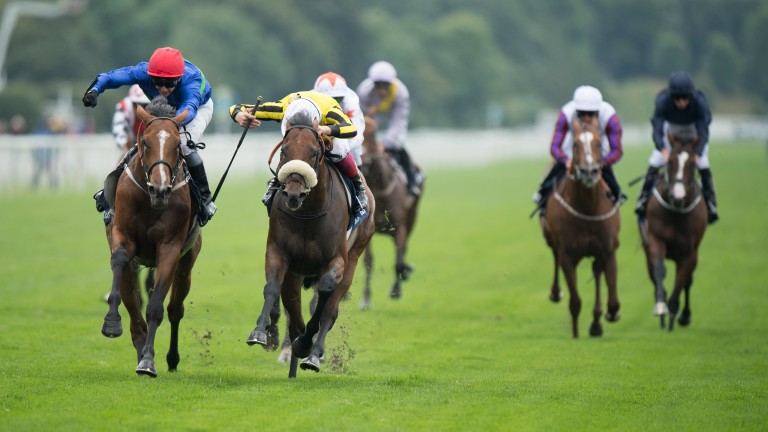 Not all heroes wear capes, so the saying goes. And by the same token not all Classic hopefuls have to cost a king's ransom, as Wells Farhh Go, who puts his Derby credentials to the test in Thursday's Dante Stakes, proves.

The son of Darley's sophomore sire Farhh was bought by trainer Tim Easterby as a yearling for just 16,000gns, but arguably the bigger bargain was had by breeder Maria Marron, who purchased the unbeaten colt in utero for a mere €11,000 at Goffs back in 2014.

There were 450 mares catalogued at Goffs that year, but Marron and her husband - Andre Michalski - who began breeding as a retirement project, honed in on lot number 1039, a daughter of Galileo from the family of Ibn Bey and Red Bloom consigned by Shadwell.

"Her pedigree was the big attraction, and as we sell our foals we tend to look for first-season stallions, and at the time Farhh was one of them," says Michalski.

The following March Wells Farhh Go was born at the couple's home of Palmers Hill Stud, situated in the shadow of the Rock of Cashel among the rolling greenery of County Tipperary.

Darley: Farhh, a Lockinge and Champion Stakes-winning son of Pivotal, looks in for a big year with three-year-olds like Wells Farhh Go, Dee Ex Bee and Move Swiftly to look forward to pic.twitter.com/ekBpYltSHZ

"He was huge when was he was born! We never thought he would make a two-year-old because he weighed over 70 kilos at birth," says Michalski, who cut his teeth in the breeding industry working at the Polish National Stud.

"He was always very big and wasn't bred to be a flyer at two, so we were very surprised by his unbeaten juvenile record. I believe he's bred to be a Classic-distance horse so hopefully that's what he'll show in the Dante."

Palmers Hill Stud sold the colt as a foal at Goffs the following November, where he was picked up by Howson and Houldsworth Bloodstock for €16,000. He was then reoffered through Gortskagh House Stud at Book 3 of the Tattersalls October Yearling Sale, where Easterby parted with 16,000gns to bring the son of Farhh back to his North Yorkshire base.

Despite his considerable frame Wells Farhh Go made his debut in a York maiden in late July, and duly charged to a 2¼-length success over the smart Laugh A Minute. His second start came a month later when he showed a thoroughly genuine attitude to edge out subsequent Greenham Stakes winner James Garfield in a thrilling finish to the Group 3 Acomb Stakes.

With Farhh and Mowazana both achieving their peak Racing Post Rating's over 1m2f, the Dante trip looks sure to see Wells Farhh Go to even better advantage.

But should the Easterby-trained colt maintain his unbeaten record, victory would be somewhat bittersweet for the couple, as the colt is the only foal they bred out of Mowazana before they sold her on in a bid to build a broodmare of strictly commercial appeal.

"You never really know what's ahead so you have to make a decision and just trust your instincts," Marron says on the subject of selling Mowazana. "All we can do is continue to breed the best to the best and hope for the best.

"We're just a small breeder and, what's sad is that because it's just the two of us working here on the farm, we've never seen our horses running. Hopefully someone will offer us a ticket to come and see our stock race soon!"

The couple, who are into just their fourth season as breeders, keep a three-strong broodmare band on the farm, namely Classic Falcon - a daughter of Dubawi with an Iffraaj filly at foot, the Soviet Star mare Belova - who delivered a filly by Kodi Bear earlier this year, and Adelfia - daughter of Sinndar who is due to foal to Ajaya.

"Our horses will always come first - they live better than we do!" says Marron. "A lot of breeding is down to luck but we both put an awful lot of hard work in too."

They may be breeding on a small scale, but the fruits of Marron and Michalski's labour could be about to make a big impact.

Watch: Bigger book of mares for Nathaniel thanks to Enable's exploits

FIRST PUBLISHED 6:18PM, MAY 16 2018
He was always very big and wasn't bred to be a flyer at two, so we were very surprised by his unbeaten juvenile record

'The dam had ten winners from ten foals - we got number 11 and it was useless!'