Browne on Mission for quality in 'mixed' turf catalogue 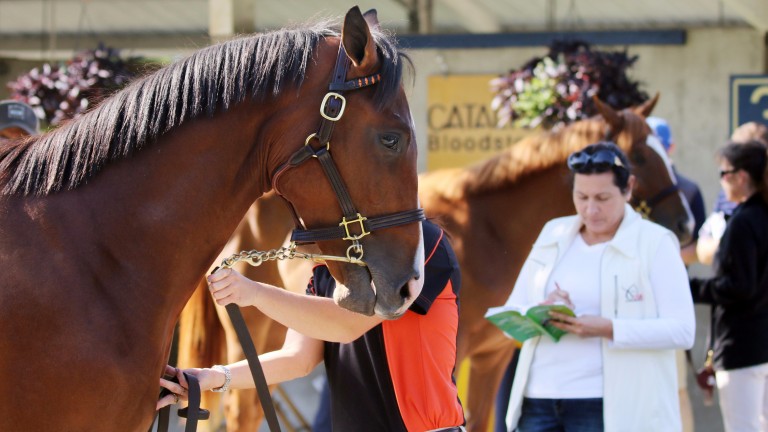 Prospectors for turf yearlings at Fasig-Tipton featured few Europeans prepared to step up to the plate
Fasig-Tipton Photos
1 of 1
By Michele MacDonald 11:30AM, SEP 11 2017

While Fasig-Tipton officials bemoaned a lack of European buyers at their inaugural Turf Showcase sale on Sunday, one who did step
up to the plate was Willie Browne of Mocklershill.

After buying a bay colt from the first crop of Frankel's multiple Group 1-winning brother Noble Mission, Browne said he intends to resell the youngster at Arqana's breeze-up sale in Deauville.

"He is a very good looking horse and has a bit of size and scope, very athletic, so I think he has a chance," Browne said after acquiring the colt, the first foal of an unraced Medaglia d'Oro mare, for $100,000. "He has a lot of French in his pedigree so I'll sell him in France."

Browne said that he found the competition "very strong" for good horses at the Fasig-Tipton sale, which nonetheless produced a 48.9 per cent buyback rate – with just 74 sold of 145 offered.

"I wanted to buy a Scat Daddy but everybody wants one," Browne said. Two colts from the late sire's last crop topped the sale at $250,000 each. Browne expects heated bidding for attractive horses to continue through the marathon sale opening across town at Keeneland on Monday.

"There's precedent set now for the week: looking at what went on here, I think it will be difficult to buy right through [at Keeneland],” Browne said. "With the good ones, there's no problem selling them. I think at this sale, the quality is a bit mixed, but I think it's a good start. It will work, and I think the vendors now will have more confidence to [present] a better horse in the future."

Noble Mission proved popular with the few international buyers that took home horses from the auction, J S Co buying two colts by the sire to send back to Japan to race for Masamichi Hayashi, who campaigns multiple Group winner Albert.

The first was a $150,000 colt produced by French winner Mayoress, a Machiavellian full sister to Grade 3 winner Marietta from the
family of Japanese champion and accomplished sire Gold Allure. The second, produced by a half-sister to Grade 1 winner Golden
Missile, cost $90,000.

Three other yearlings from the sale will also head to Japan. Masashi Kitagawa's Capital System Co Ltd purchased colts by Declaration Of War and Temple City for $130,000 and $75,000 respectively, while Big Red Farm bought a Magician filly for $35,000.

Godolphin was both a buyer and seller at the sale, obtaining a Divine Park colt out of a half sister to British stakes winner Noble Storm from breeder Brereton Jones for $150,000; and breeding an Animal Kingdom filly, a half-sister to Prix d'Ispahan winner Laverock and the dam of Australian champion Pierro, sold through Brookdale Sales for just $32,000 to McCauley Farm.