At The Sales INGLIS

Brother to Pariah makes friends all round 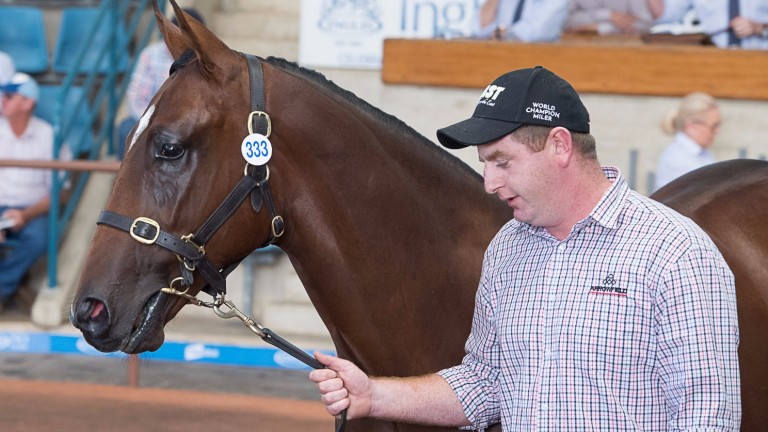 There is no better way to go out than on a high, and that is precisely what Inglis has achieved with the final Easter Yearling Sale staged at the iconic Newmarket complex in Sydney. Heavyweights from all round the racing and breeding world again traded increasingly expensive blows through Thursday's final session, with seven-figure lots coming thick and fast from the off and trade headed by the sale’s top lot at A$2,500,000 (£1,510,452/€1,771,670).

Seven lots made A$1m or more, taking the total for the week to 17.

The most expensive of all proved a near-perfect microcosm of the sale as a whole. From an opening sally of A$300,000 bids flew in from all directions until just two players remained: Michael Wallace of the China Horse Club, and Sheikh Mohammed bin Khalifa al Maktoum's representative Tim Stakemire.

It was Sheikh Khalifa's man, again bidding from the ringside restaurant, who delivered the knockout blow of A$2.5m to take home his second session-topper of the sale.

The colt, offered by John Messara's Arrowfield Stud, is a son of Redoute's Choice and the winning Hussonet mare Secluded. As such, he is a brother to Blue Diamond Stakes runner-up Pariah - in whom, as had been announced only the previous day, Arrowfield has acquired a 50 per cent stake and standing rights.

"It's been a big 24 hours," said Messara. "I'm very happy Sheikh Khalifa has got this one, because he's been a great supporter of Redoute's all the way through. He's very excited and I'm very pleased for him. Let's hope he follows in the footsteps of Pariah.

"It's fitting that Redoute's should top the sale as he's been leading sire here for so long now. This colt is a bit more mature than Pariah was, in the head and the body. Pariah was a baby at the sale."

The rangy colt is also closely related to TJ Smith Stakes winner Melito, being out of her half-sister, while the likes of New Zealand champion three-year-old Shikoba also appear further down his page.

Messara added that securing a share in the top lot's half-brother Pariah from James Harron had not been without its difficulties.

"I'd been hassling the bloke from the day the horse got knocked down to him!" Messara said. "I approached him to buy back a piece with the stallion rights, but he already had a syndicate so he couldn't do it. I've not left him alone since and I've finally chiselled him down - although he got a good deal, don't worry about that! It was really important to get hold of the animal because I think he's going to be a top three-year-old."

The colt became a remarkable 73rd seven-figure yearling to be sired by the 20-year-old Redoute's Choice, and his sale contributed to Arrowfield finishing a street clear at the head of the vendors' table by aggregate. A total of 34 lots sold for A$18,595,000 smashed the previous record for an Australian yearling sale.

Snitzel keeps up the heat

While the top lot highlighted the industry's lasting esteem for Redoute's Choice, other results suggest that one of his sons in particular has designs on the throne.

For fellow Arrowfield resident Snitzel was represented by a trio of seven-figure lots on Thursday, including a A$1.7m colt consigned by the stud and bought by Hong Kong-based agent George Moore.

The colt is out of the winning Anabaa mare Top Cuban, who has produced two winners from two foals, Jing Jing Win and the Group 3 winner Havana.

"The horse ticked all the boxes, he had the physique, he had the walk and he's very well-conformed," said Moore. "We went over to look at him with our clients from Hong Kong, they were all over him, patting him, practically hugging him, and he didn't even flinch. He's going to be raced over here but, given that most of our clients are from Hong Kong, that's where he'll end up. Unless he has a stallion career over here - he already has the pedigree for that."

Moore conceded he had to part with more than he had intended for the colt, but took a pragmatic of such a buoyant market.

"We paid A$500,000 more than we expected, but we've been paying a 30 per cent premium the whole three days," he shrugged. "We've bought all our best horses from here, Able Friend came from here. The reason I really like coming here is because the pedigrees are there; we get the type and the page. If you’re really in love with the horse you’ve just got to come away with it. And the great thing about having your clients with you is you can increase the budget by 40 per cent, no problem!"

Though thwarted in his bid for the sale-topper, Wallace did not walk away empty-handed - securing a Snitzel colt for A$1m on behalf of the China Horse Club.

"We got the one we wanted, that's the main thing," said Wallace. "I've seen this colt a lot and I've really been drawn to him. He reminds me of what we saw in Russian Revolution here a couple of years ago, there's great similarity through his head and his eye."

The China Horse Club has enjoyed a productive spell with the progeny of Snitzel in recent weeks, two of his sons having carried the red and yellow-starred silks to success in a brace of Group 1 races. Russian Revolution kicked things off by landing The Galaxy Stakes at Rosehill before the two-year-old Invader showed his mettle to claim the Inglis Sires’ at Randwick during the opening leg of The Championships.

The colt, another to be offered from the Arrowfield draft, is the second foal of the Listed-winning Leroidesanimaux mare Tara From The Cape, who also finished fourth in the Breeders’ Cup Juvenile Fillies' Turf and the Keeneland Alcibiades Stakes.

"We're looking at forward, fast colts," explained Wallace. "The ones that can get the job done at two and three that we can eventually put in the stallion barn. He's a beautiful looker and by a hot stallion, we've had a great trot with Snitzel. He'll go to Peter Snowden."

Wallace added that he felt that the market had been very competitive but that prices were simply a sign of the times in Australia.

"I wouldn't call it crazy as you've got willing bidders and willing sellers," he said. "It's a very strong market but it's very healthy and Australia is the model for the rest of the world to try and emulate at the moment. It's exciting to be a part of. We've sold very well, we've been beaten on some and we've bought some so it's been a good week for everybody."

The third-highest price of the concluding session was achieved by a son of Yarraman Park’s in-demand sire I Am Invincible, with Blue Sky Bloodstock and the Fung family’s Aquis Farm joining forces to secure the colt.

"I thought he was outstanding, he's by one of the great young speed sires of Australia, he's from a speed mare by a great Aussie stallion in Blevic, he was just a beautiful colt," said Blue Sky Bloodstock's Julian Blaxland. "I thought he was one of the best colts of the year. The Fungs have a big stud up at Canungra and they're committed to making and standing stallions in Australia - and we hope one day this colt will be one of them.

"Coming to Easter we had a very small shortlist and we've managed to pick up three or four on there. There's been stiff competition, but if you want to buy the best you've got to put your hand up."

The colt, one of two seven-figure colts for the sire during the sale, is out of the Blevic mare Streetcar Stella, a placed sister to Group 3 winner Streetcar Magic and a half-sister to Streetcar Isabelle.

Blaxland left it until the auctioneer's gavel was all but down before giving the bid-spotter the nod to go to A$1.5m, but denied playing mind games.

"That's just the way it went," he said. "I think you bid as hard and as fast as you can and you hope you scare them off. Usually it doesn't work out at this level but this time it did."

The colt was offered by Antony Thompson’s Widden Stud, this year celebrating its 150th anniversary.

Wind the clock back 20 years and Mark Richards would have been nervously anticipating a ride in the Grand National. But here he was a world away from Aintree, busy securing yearlings for the Hong Kong Jockey Club.

"We haven't had too many Snitzels in Hong Kong but the ones we have had have gone very well," he said. "They don't come cheap though! This horse was an absolute athlete. He's out of a great mare but sold himself and we're very happy to have got him."

The colt is the third foal out of the dual Group 1-winning Savabeel mare Scarlett Lady.

Despite his big spend Richards was another to comment on how tough it had been to secure the right horses.

"We've seen how strong the market's been so it was obvious we were going to have to be strong as well, if we were to get the horses we really wanted," he said. "I felt those were today, and just hope they turn out to be as good when they get on the track as they look in the sales ring. They're by the right sires and out of the right sort of mares, fingers crossed now."

FIRST PUBLISHED 12:37PM, APR 6 2017
It's a very strong market but very healthy and Australia is the model for the rest of the world to emulate at the moment