Weanling filly was purchased by Hidden Brook for $110,000 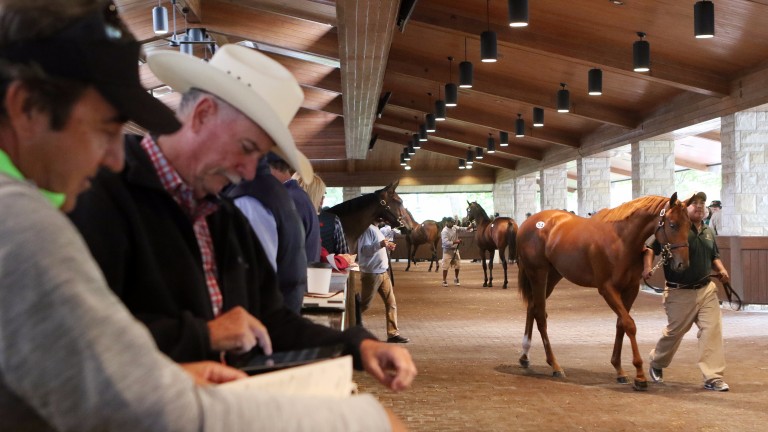 Weanlings brought eight of the ten highest prices during the ninth session of the Keeneland November Breeding-Stock Sale, led by the sale of a Broken Vow filly to agent Hidden Brook for $110,000.

Bedouin Bloodstock consigned the filly whose dam, the Curlin mare Whirl, is a half-sister to multiple Grade 2 winner Strike A Deal.

Two weanlings sold for $100,000 each, the session's second highest price. Madison River Thoroughbreds paid $100,000 for a colt from the first crop of Tapiture out of the Distorted Humor mare All About My Girls. Consigned by Hunter Valley Farm, the colt is from the family of champion filly Halfbridled.

A filly from the first crop of Summer Front brought a final bid of $100,000 from agent James Layden. Out of the Majesticperfection mare Majestic Smile, the filly is from the family of recent Grade 3 winner on turf Morticia. She was consigned by Brereton Jones and Airdrie Stud.

Mary and Maria Haire paid $75,000 for the top-priced racing or broodmare prospect, Reality Queen, a two-year-old filly by Pioneerof The Nile from the family of Grade 2 winners Teeth Of The Dog and Funistrada. Bluewater Sales consigned Reality Queen, whose dam is the Graded stakes-placed Pulpit mare A.P. Reality.

The November Sale continues through to November 18, with all sessions beginning at 10am ET.