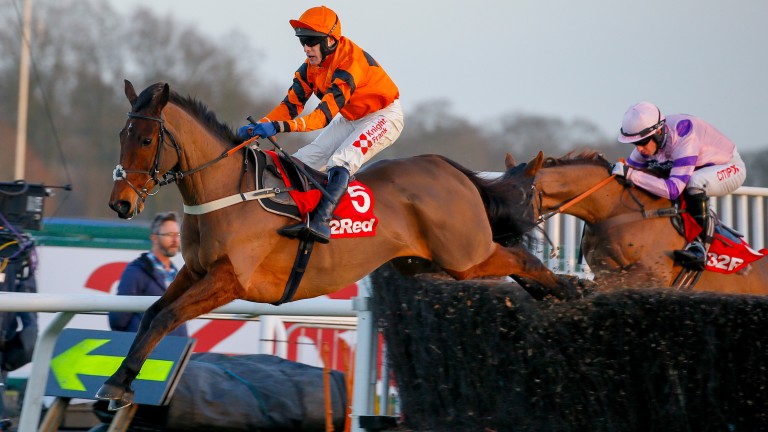 British National Hunt stallion masters had reason for cheer on Monday as sires based in the country provided two - and oh so nearly three - of the Grade 1 winners at Kempton.

Alan King's exciting hurdler Yanworth, a son of Yorton Farm Stud resident Norse Dancer, put his elders My Tent Or Yours and The New One to the sword with a smooth success in the Christmas Hurdle.
Another young pretender, the Colin Tizzard-trained Thistlecrack, delivered a thrilling display of power and class to land the King George VI Chase from reigning champion and stablemate Cue Card.

He is by Overbury Stud kingpin sire Kayf Tara, who must rank as the best active jumps sire in Europe.

It was almost a clean sweep of Grade 1 wins at Kempton for British-based sires as Might Bite - a son of Scorpion, transferred to Shade Oak Stud from Ireland this year - had the Kauto Star Novices' Chase at his mercy but fell at the final fence when clear.

Yanworth a wonder horse for Norse

Yanworth was registering a much deserved first Grade 1 victory, having won three Grade 2 contests, finished second in the Neptune Investment Management Novices' Hurdle and fourth in the Champion Bumper.

He is the most notable jumps runner by Norse Dancer, a son of Halling who was trained by David Elsworth for Jeff Smith to run third in the 2,000 Guineas and fourth in the Derby, and to notch placings in another five top-level contests.

Norse Dancer stands at Yorton Farm Stud after stints at Smith's Littleton Stud and Wood Farm Stud when it was owned by Bill Bromley.

He is the eighth foal out of the winning Galetto mare Yota, making him a half-brother to multiple scorers Grand Lahou (by Cyborg) and Trust Thomas (Erhaab).

Yota, who died in 2011, was a half-sister to French Listed-winning hurdlers Azulejo and Juntico and stakes-placed Jarro and Loucessita.

Highflyer Bloodstock and Alan King paid just £16,000 for Yanworth at the Spring Store Sales at Doncaster in 2013.

Thistlecrack wrote himself into the record books as the first novice to win the King George with a fine round of jumping and an electric turn of foot to pull clear of his rivals.

He is the best performer by Kayf Tara, a stalwart of the British jumps ranks who has come to the boil in the last year with a glut of big-race winners.

Thistlecrack was one of three Grade 1 winners at the Cheltenham Festival when he dazzled in the World Hurdle, along with Ballyandy in the Champion Bumper and Blaklion in the RSA Chase.

Kayf Tara has also been represented by other Grade 1 winners Tea For Two (not disgraced in fourth behind Thistlecrack at Kempton) and Identity Thief, as well as Greatwood Handicap Hurdle scorer North Hill Harvey and Hennessy Gold Cup second Carole's Destrier.

Thistlecrack was bred by Robin and Scarlett Knipe of Cobhall Court Stud, past masters at breeding top-class jumpers as they were also the source of Cheltenham Festival heroes Anzum and Master Oats.

He is out of the late Ardross mare Ardstown, a winner between the flags and of four races under rules including a valuable Newbury contest in which she beat none other than Plaid Maid, who would go on to become the dam of Coneygree.

Ardstown is also the dam of Grade 2-placed hurdler West Approach and multiple winner Kennel Bridge, while her final foal, a three-year-old sister to Thistlecrack, was sold to the King George winner's owners Heather and John Snook for £165,000 at Cheltenham in March.

The Knipes sold Thistlecrack as a foal to John McDonald for €32,000 at the Tattersalls Ireland November National Hunt Sale in 2008 and McDonald resold the horse as a three-year-old in the same ring to the Snooks for €43,000 in August 2011.

Thistlecrack was completing the second leg of a Grade 1 double at Kempton for Tizzard as it was the trainer's Royal Vacation who took advantage of Might Bite falling in the Kauto Star Novices' Chase.

The late Ballylinch Stud resident King's Theatre, a multiple champion jumps sire, has a lengthy list of Grade 1 winners that also includes Captain Chris, Carlingford Lough, Menorah, Riverside Theatre and The New One, and he was also on the mark on Monday with Limerick Grade 2 novice chase winner Bellshill.

Royal Vacation was bred by Tim Hegarty out of the Foxhound mare Summer Break, who finished third in the Grade 3 Fairyhouse Juvenile Hurdle for Tony Mullins.

Summer Break, rising 20 years old, has been a fine servant at stud with all her three progeny to run over jumps having gained black type. Besides Royal Vacation, there was Ahyaknowyerself (Milan), winner of a Listed hurdle at Market Rasen, and Delphi Mountain (Oscar), second in a Listed handicap hurdle at Listowel.

A distant relative of Irish 2,000 Guineas hero Shaadi and Cheveley Park Stakes winner Regal Rose, Summer Break has produced fillies with her last four foals - a five-year-old by Flemensfirth called Putland's Bridge, a four-year-old by Presenting called Champagne Ruby, a two-year-old by Yeats and a yearling by Milan.

She was covered by Soldier Of Fortune this year.

Royal Vacation was a €30,000 Tattersalls Ireland November National Hunt foal purchase by Aiden Murphy who was resold by Goldford Stud to Aiden Kennedy as a three-year-old store for €90,000 at the company's Derby Sale.