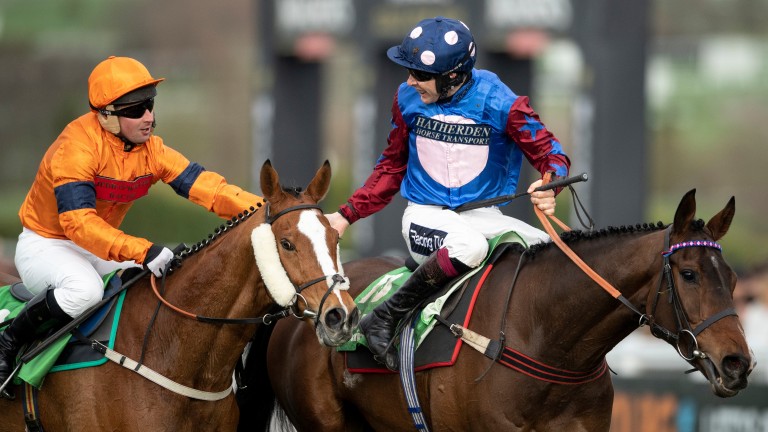 Sam Spinner (left) provided a rare high point for British breeding at this year's Cheltenham Festival when a gallant second in the Stayers' Hurdle
Edward Whitaker
1 of 1
4:49PM, MAR 20 2019

A washout for the home team of breeders

Even the most ardent supporter of British National Hunt breeding would be hard pressed to accentuate the positives in the country's performance at this year's Cheltenham Festival. There were no winners at all at the meeting, with the horses who won the 28 races staged split evenly between Irish and French-breds.

Moreover, only nine of the 56 silver and bronze medals at the Olympics of jump racing were bestowed upon horses carrying the GB suffix, with better fancied runners such as Lady Buttons, Presenting Percy and Supasundae falling short and the likes of Honeysuckle and Penhill not turning up at all.

There were crumbs of comfort, notably Sam Spinner's gallant runner-up effort in the Stayers' Hurdle, Santini's close second in the RSA Chase and Thyme Hill's promise-filled third in the Champion Bumper. But generally it was a washout for the home team.

There have been multiple British-bred winners at every festival since 2008 so on the face of it, this year's blank is probably a statistical glitch – like the eight the country managed in 2012, two more than in any other year during that time frame.

It must also be remembered that, numerically, the odds are stacked against British breeders striking at the big jumps festivals. Last week's Grade 1 winners Paisley Park and Topofthegame were among 2,725 foals born in Ireland in 2012 who had an intended career in National Hunt racing, compared with just 593 bred for that purpose in Britain in the same year.

But perhaps both Irish and British breeders and stallion masters should look to their laurels, considering the domination by French-breds of certain races at this year's festival, taking half the Grade 1s and producing a clean sweep of the places in the Gold Cup.

It is hard to fathom how French jumps breeding success can be emulated, as it appears to be down to the combined effects of nature – the invigorating injection of AQPS blood, careful broodmare selection and the fact that many notable breeders act as owners and work closely with trainers – and nurture, with jumps stock set about their business much earlier than in Britain and Ireland.

Measures have been taken, with productive French sires and their talented female compatriots transplanted into Irish and British studs, and store horses presented to buyers at a younger age than in the past.

But through pedigree or performance, or both in some cases, Al Boum Photo, Defi Du Seuil, Duc Des Genievres, Envoi Allen, Espoir D'Allen, Frodon and Klassical Dream suggest there are more lessons to be learned about capturing the French-breds' je ne sais quoi.

Nearing the end of the era of great Sadler's Wells stallions

Oscar was the meeting's leading sire on countback, as he also had two third-place finishers, although Buck's Boum and Voix Du Nord achieved their doubles in Grade 1 contests.

With Oscar and Voix Du Nord both dead, it is Buck's Boum, the brother to four-time Stayers' Hurdle hero Big Buck's, who emerges as the most exciting young jumps stallion around.

There were several other sires who deserved being mentioned in dispatches.

Milan confirmed himself a dab hand with a staying chaser with Hazel Hill scoring in the Foxhunter, Santini taking second in the RSA and Josies Orders filling the same position in the Glenfarclas, while brothers Beat Hollow and Court Cave came up with Grade 1-winning novice hurdlers Minella Indo and City Island.

Beat Hollow (aged 22), Milan (21) and Court Cave (18) deserve to be cherished while they all still ply their trade at stud in Ireland, as does Kayf Tara (25) at Overbury Stud, who had three third-place runners last week – Good Thyne Tara in the OLBG Mares' Hurdle, Thyme Hill in the Champion Bumper and a former winner of that race, Ballyandy, in the Coral Cup.

The meeting strengthened the impression that it is the late Montjeu who is Sadler's Wells' most effective heir in the jumps stallion ranks, with his Derby-winning sons Authorized and Motivator on the scoresheet through Glenfarclas winner Tiger Roll and Triumph Hurdle victor Pentland Hills respectively.

Authorized and Motivator, both standing in France, also fielded a place-getter each in Ciel De Neige and Stormy Ireland, while Montjeu's sorely missed son Fame And Glory was on the mark with Albert Bartlett runner-up Commander Of Fleet and another of the stallion's Derby winners, Camelot, made his presence felt through Triumph Hurdle third Gardens Of Babylon.

Galileo got in on the act as a sire of sires through Martin Pipe winner Early Doors, a son of Europe's busiest stallion of the past three years Soldier Of Fortune, as well as narrowly beaten Dawn Run runner-up Concertista, a daughter of Nathaniel, and Supreme Novices' third Itchy Feet, by Cima De Triomphe.

Doubling up on Coolmore great appears no bad thing

Speaking of Sadler's Wells, the festival continued one of the themes of the season: the increase in high-class jumpers inbred to Coolmore's talismanic stallion, a phenomenon that was probably always on the cards with so many of his sons having stood in National Hunt or dual-purpose stallion roles.

Footpad (3x2) and Tiger Roll (3x3) had already shown at the meeting that doubling up on Sadler's Wells was not necessarily a bad thing, and they were joined this year by Commander Of Fleet (3x3) and Pentland Hills (3x3).

Ill-fated Triumph Hurdle favourite Sir Erec was also inbred 3x3 to Sadler's Wells and had an eerily similar pedigree pattern to the race's eventual winner Pentland Hills. Both were sired by sons of Montjeu – one by Camelot, the other Motivator – with dams by Galileo.

Bob Back, Presenting and lesser lights shine as damsire

Cheltenham showed once again why a Bob Back mare is an essential weapon in a jumps breeder's artillery, as his daughters produced Coral Cup winner William Henry and four other place-getters – Ben Dundee, Jerrysback, Josies Orders and Shantou Flyer.

Other daughters of Bob Back produced earlier stars such as Briar Hill, Many Clouds, Special Tiara and Synchronised.

The late Presenting was the only name to be represented by more than one winner as damsire at last week's meeting, though, through Hazel Hill and Paisley Park – both by Sadler's Wells-line stallions.

Presenting's prowess in this department is also well-known, thanks to Beat That, Death Duty, Might Bite, Presenting Percy, Rathvinden, Somersby and others.

But there were several lesser-known lights who shone last week.

For most breeders, producing a winner at the Cheltenham Festival is a once-in-a-lifetime ambition. How remarkable, then, that two managed to notch not just a double at this year's meeting, but a Graded double.

The pair's family has been nurtured by the Vagnes for more than half a century, with Andre having purchased Espoir D'Allen and Envoi Allen's fifth dam, the 1962-foaled Verdi mare Scarlett H, and breeding from the mare one foal before her premature death, Dalila, who would go on to produce seven winners.

Meanwhile Catherine Boudot – mother of leading French jockey Pierre-Charles, who is heavily involved in his family's breeding ventures – is registered as the breeder of Defi Du Seuil, triumphant in the JLT, and Eglantine Du Seuil.

Mesnil is certainly a stud for all seasons. It was only last year that homebred Nonza, trained by Henri and Antonia's son Henri-Francois, notched a victory in the Prix Jean Romanet. The Zanzibari filly has since been sold to commence her breeding career in Japan.

FIRST PUBLISHED 4:49PM, MAR 20 2019
The meeting strengthened the impression that it is the late Montjeu who is Sadler's Wells' most effective heir in the jumps stallion ranks