Mare was offered in foal to leading sire Tapit 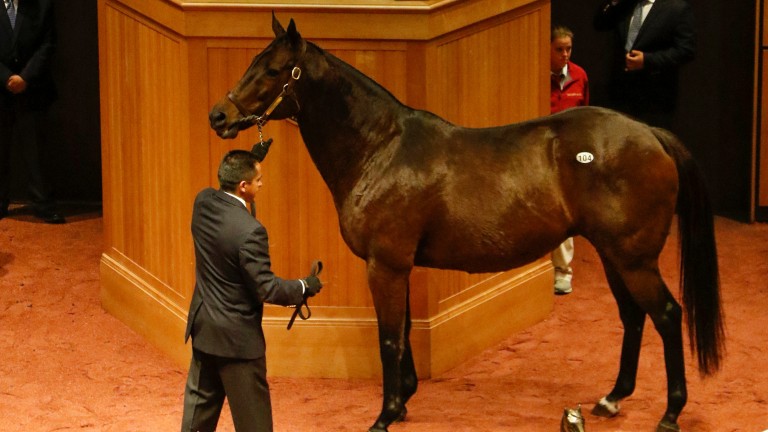 The stars aligned at the Fasig-Tipton November Sale in Lexington on Monday as an international buying bench lured by a catalogue deep in quality produced numbers that exceeded all expectations.

On another unseasonably warm night in the Bluegrass, the sales pavilion was crowded as a group of top-class broodmares and fillies that had enjoyed recent success on the track were offered to the public.

The 34 horses that did not sell represented a 28 per cent RNA rate, compared with 34 per cent last year.

"Tonight it was exceptionally strong for quality horses," he said. "It was a tremendously strong sale. When you have special horses for sale like we did tonight you have pretty special results."

Browning said a frequent comment from consignors was that many of their top horses were bringing well in excess of the reserves.

The sale-topper, who is the dam of Grade 1 winner Constitution, British Group 2 winner Boynton, and Grade 3 winner Jacaranda is a half-sister to three stakes winners, including Grade 1 winner Emcee.

She was consigned by Taylor Made Sales Agency.

"She's got it all, looks, triple Graded stakes producer, in foal to the best stallion in America," Isaacs said. "Say no more. We're trying to develop a serious breeding programme and she's the goods. Hopefully we get a good colt. A little more than I wanted to pay, but the good ones cost."

Isaacs acknowledged that the presence of Malone, the international businessman who is the chairman and chief executive of Liberty Media, made a difference in how high he was willing to go to secure the 11-year-old mare.

"Can we bid one more time?" Isaacs said he asked the boss as the bidding progressed. "Ultimately, he gave me the go ahead. It's more money than I'd like to spend but the mare is what we're looking for, she's everything that a breeder would want. He didn't make the money he made by being silly with his money, and I didn't get where I am in my career by being silly with my boss' money. I did feel a little stronger with him sitting next to me."

Isaacs was non-committal on 2017 mating plans for the mare. "We'll see what this Tapit looks like, the choices are kind of thin here in America, but we'll see where we go."

The day's second-highest price of $3 million was paid by Japan's Shadai Farm for three-time Grade 1 winner Curalina, a daughter of Curlin consigned as a broodmare prospect by Meg and Mike Levy's Bluewater Sales.

"What can I say?" said Shadai's representative Naohiro Hosoda. "Anybody knows this filly is high-class."

Bred by CASA Farms in Kentucky, Eclipse Thoroughbreds and Dogwood Stable bought Curalina for $125,000 out of the 2013 Keeneland September sale. She went on to compile a 6-3-2 record out of 13 starts and earn $1,535,940. She won the Acorn Stakes, Coaching Club American Oaks, and the La Troienne Stakes [all Grade 1].

Multiple Grade 1 winner Stopchargingmaria was the third-highest priced horse of the day, purchased by Three Chimneys Farm for $2.8 million from Taylor Made.

Stopchargingmaria, a daughter of Tale of the Cat, was offered by her previous owner, Mike Repole, at the 2014 Fasig-Tipton November Sale, where she was bought back at $3.15 million. Bought privately by Louise and Kiki Courtelis' Town & Country, she went on to win three Grade 1 stakes, including the 2015 Longines Breeders' Cup Distaff.

Among other prominent offerings Monday, Love The Chase, dam of dual classic winner and 2014 Horse of the Year California Chrome, brought a winning bid of $1.95 million from bloodstock agent John McCormack.

"She was a nice mare, physically, she had a lovely quality," said McCormack, who did not identify his client. "It's right there for everyone to see that she's the dam of a Horse of the Year and in foal to Tapit. You can hope and believe that the story will get better and not stay static just where it is.”

FIRST PUBLISHED 9:32PM, NOV 8 2016
She's got it all, looks, triple Graded stakes producer, in foal to the best stallion in America