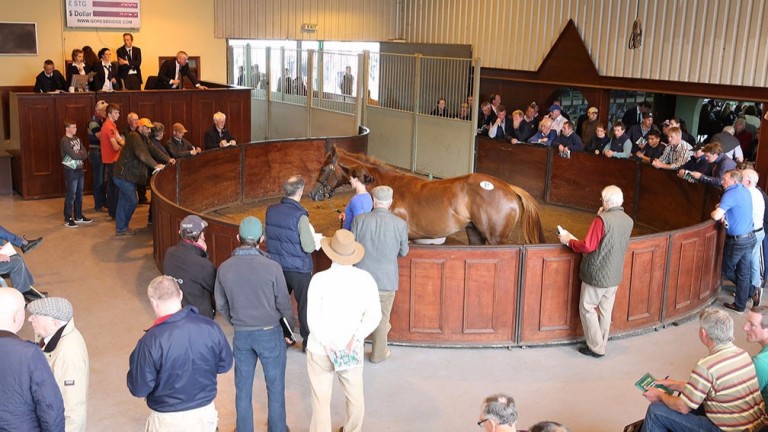 The commercial clout of Kodiac is much in evidence in the catalogue now online for the Goresbridge Breeze-Up Sale on May 26, with the Tally-Ho stallion set to be represented by no fewer than 14 lots.

Kodiac had four sons starting out at stud this season in dual Group 2 scorer Adaay, French Group 3 winner Coulsty and Royal Ascot heroes Ardad and Prince Of Lir. He is the only sire with a double-figure turnout at the County Kilkenny sale, followed by Zoffany with nine lots and Lope De Vega with six.

Among Kodiac's progeny on offer is a sister to Listed winner Terror, who finished third in the Group 3 Sceptre Stakes at Doncaster and fourth in the Group 1 Cheveley Park Stakes at Newmarket.

A trio that catch the eye from Tally-Ho Stud's own consignment are a half-sister to the Golden Jubilee Stakes runner-up Monsieur Chevalier and a half-brother to the Group 2 Queen Mary Stakes winner Elletelle, both by Society Rock, and a Camacho half-sister to the high-class sprinter Balthazaar's Gift.

Mayfield Stables offers a Red Jazz half-brother to the Group 3 winner Soraaya and Jean-Luc Lagardere runner-up Declaration Of War - not to be confused with the sire of that name, standing at Ashford - while Baroda and Colbinstown send a Lope De Vega half-brother to Del Mar Oaks winner Amorama under the hammer.

This sale is the largest of its kind in Europe. Martin Donohoe of Goresbridge said: "Once again we had in excess of 600 applications but we narrowed that down to 237 of the very best two-year-olds we have ever assembled, from vendors with a proven track record of producing top horses.

"Thanks to Irish Thoroughbred Marketing, our sale was streamed live to the Singapore Turf Club for the first time. Four horses were purchased via the online bidding facility at Kranji and the first to run, Golden Thunder, made a winning debut at the same track earlier this month. The facility will be in place again this year, once more thanks to the support of ITM.

"A day after the 2016 sale, Blue De Vega placed in the Irish 2,000 Guineas, the following month Hunt won a stakes race at Santa Anita, and already in 2017 Speedo Boy won a €55,000 stakes race in France. That illustrates the variety and class buyers have come to expect from our sale, where we offer ready-made winners for every budget."

Lots will breeze at Gowran Park racecourse at noon on May 25, while the sale will commence at 10.30am the next day at the Goresbridge complex.

The sale precedes the Irish Guineas festival at the Curragh on May 27-28.