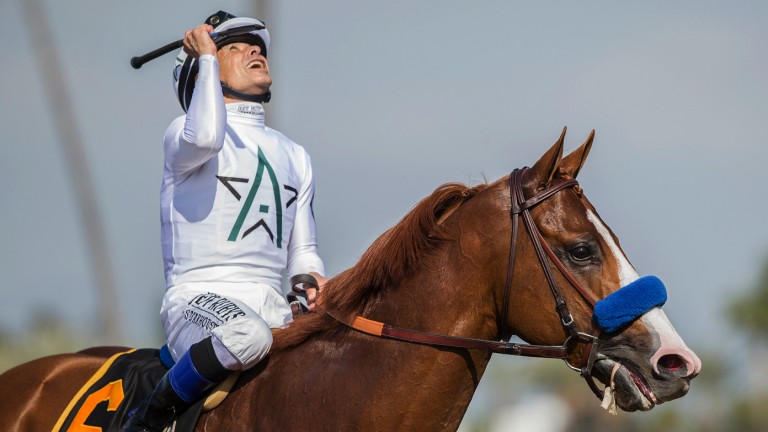 Justify coped admirably with tricky conditions in the first two legs of the US Triple Crown
Benoit Photo
1 of 1
By Ollie O'Donoghue UPDATED 7:38PM, MAY 23 2018

The US Triple Crown dream is still alive for connections of Justify after the son of Scat Daddy emerged from the fog in front in the 143rd Preakness Stakes at Pimlico on Saturday.

His breeders John and Tanya Gunther of Glennwood Farm in Kentucky are now planning to be in attendance when he tackles the third and final leg, the Belmont Stakes, in mid-June.

"To breed a Derby winner and then for him to be a potential Triple Crown winner, it's really everything," said Tanya Gunther. "We've put so much time and effort and passion into it. It's something you dream about trying to do, so to actually do it, it's a bit shocking and hard to put into words but it's been amazing.

"It's just so great for the farm and for my dad, who's spent many years at this, trying to breed a top horse like Justify. It's very rewarding and exciting.

"We're booked to go, so fingers crossed everything goes well between now and then. My family: my dad, my sister and my brother. We're all going to be there and cheering him on."

Justify is a half-brother to the Californian Stakes third The Lieutenant, out of the Grade 3-placed miler Stage Magic, who also has a Will Take Charge yearling colt, a Pioneerof The Nile colt at foot and a visit booked in to Quality Road.

Describing the awful conditions the Bob Baffert-trained colt had to contend with during the first two legs, Tanya Gunther said: "The conditions were terrible, with the rain and the fog and what have you, but it added to the excitement a little bit - just not knowing where he was coming around the turn and all you could see was fog.

"Then I saw his blaze and I knew that was him. It was quite a victory really."

Tanya Gunther is now hoping the weather gods will look a little more kindly on them in New York.

"Luckily Justify doesn't mind, it was fine for him, but it would be nice if the sun came out in New York in a couple of weeks' time."

Gunther will be at Sandown on Thursday, where Frankel colt Without Parole - a half-brother to Tamarkuz bred and raced by Glennwood Farm - is odds-on favourite for the mile Listed Heron Stakes, having missed out on the 2,000 Guineas following a setback.

Without Parole was bred out of the Lemon Drop Kid mare Without You Babe, who delivered a Dubawi colt on Tuesday night. She will likely return to Frankel in the coming weeks.

Steve Cauthen: 'I was bulimic at times - and at some point you crack'