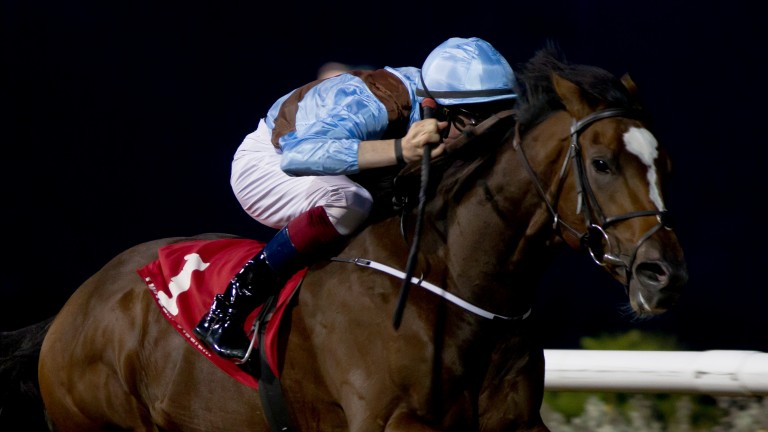 Hit It A Bomb: stands at Spendthrift Farm in Kentucky
Patrick McCann
1 of 1
By Bloodstock World Staff 6:58AM, JUN 1 2017

Hit It a Bomb, the son of War Front trained by Aidan O'Brien to win the Breeders’ Cup Juvenile Turf in 2015, is to shuttle to Haras Firmamento in Argentina for the coming southern hemisphere breeding season.

“We are delighted to be able to form a relationship with Haras Firmamento, which is one of, if not the, premier breeder in Argentina,” said Ned Toffey, general manager of Spendthrift, which stands Hit It a Bomb in Kentucky.

“The facilities and care there are second to none, and we think it’s a great fit for our promising young stallion, Hit It a Bomb, who deservedly has wide international appeal as an undefeated Grade 1-winning two-year-old by War Front, and from an extremely classy and active racing family.”

Hit It a Bomb became the only Breeders’ Cup winner for War Front when he overcame a wide draw to win the Breeders’ Cup Juvenile Turf at Keeneland.

The four-year-old was retired with career earnings of $626,821 for owner and breeder Evie Stockwell, who bred the horse out of the stakes-winning Sadler’s Wells mare Liscanna, also dam of last year's Cheveley Park Stakes heroine Brave Anna.

Hit It a Bomb is currently finishing up standing his first season at stud at B Wayne Hughes’ Spendthrift Farm. Next month, he will enter quarantine before travelling to Haras Firmamento.

FIRST PUBLISHED 6:58AM, JUN 1 2017
We are delighted to be able to form a relationship with Haras Firmamento, which is one of, if not the, premier breeder in Argentina