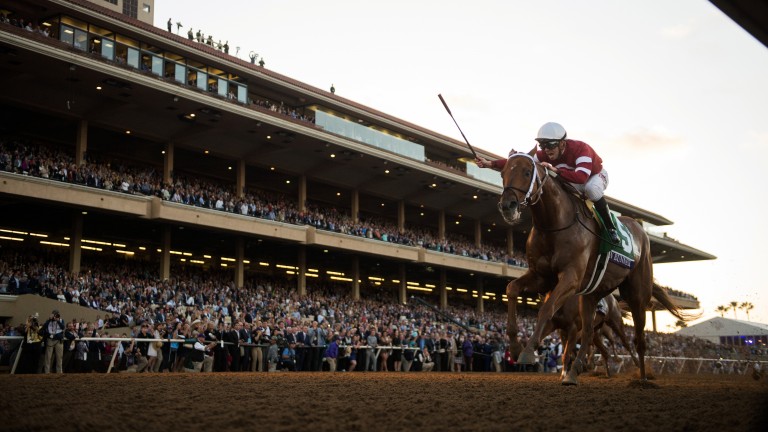 Gun Runner: Won five of his six starts this year
Edward Whitaker / racingpost.com/photos
1 of 1
By Stuart Riley UPDATED 9:40AM, NOV 8 2017

The brilliant Breeders' Cup Classic winner Gun Runner will have just one more race - in the $16 million Pegasus World Cup - before retiring to Three Chimneys Farm for the 2018 breeding season.

America's dominant older horse, and likely Horse of the Year, won five of his six starts in 2017, including four consecutive Grade 1s that culminated with Saturday's two-and-a-quarter-length demolition in the Classic.

The Steve Asmussen-trained four-year-old's only defeat this year came when chasing home Arrogate in the Dubai World Cup but rather than head back to Meydan for redemption, he will instead head to Gulfstream for the second edition of the world's richest race in a bid to take his career earnings into eight figures.

Co-owner Ron Winchell told paulickreport.com: "I have been fortunate enough to own several great horses, but Gun Runner is clearly at the top of my list. He is the horse of a lifetime.

"His brilliance was recognisable early and improved with every season. His consistency, soundness and race recovery were comparable to none. These traits should serve him well as a stallion."

The five-time Grade 1 winner was second in the Dirt Mile at last year's Breeders' Cup before landing his first race at the highest level, the 2016 Clark Handicap at Churchill Downs. This season he added the Stephen Foster, Whitney Stakes, Woodward Stakes and the Breeders' Cup Classic to his haul of top-level successes.

His arch rival Arrogate, who finished a disappointing fifth in the Classic after a muted end to his stellar career, won the inaugural running of the Pegasus back in January.

If the track's dodgy, then Gun Runner certainly ain't