International BEAST FROM THE EAST

It's business as usual across Britain and Ireland... for the most part 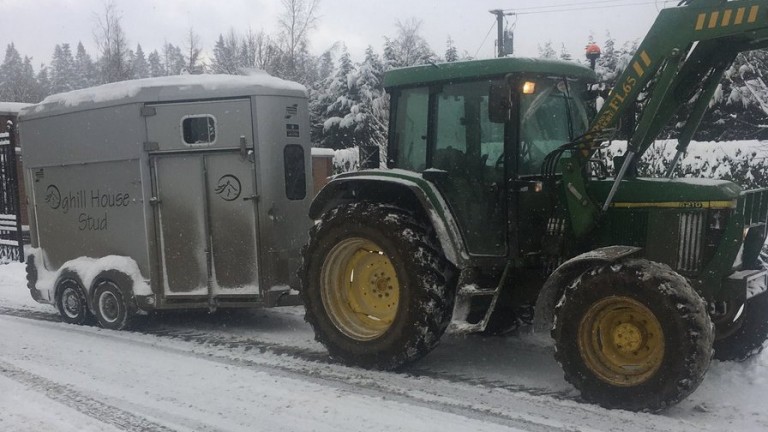 The tractor used by John Hyland to get Oghill's mare to Profitable on Wednesday
1 of 1
By Zoe Vicarage UPDATED 6:57PM, FEB 28 2018

Oghill House Stud's John Hyland was in no mood to be defeated by the so-called 'beast from the east' on Wednesday, making use of a tractor to ensure a covering date at Darley's Kildangan Stud was not missed.

As heavy snow fell across much of Britain and Ireland on Wednesday, breeders were among the racing industry professionals determined to keep the show on the road.

There was no getting on the road for Hyland's jeep though, which was buried under several inches of snow on Wednesday morning but with a mare booked in to visit newcomer Profitable, Hyland had to get creative in order to ensure the mating could go ahead.

"The only way I could think of getting across there was with the tractor," said Hyland. "At the end of the day, it was the safest option for me and for the horse. We couldn't miss a cover like this as he's a busy stallion - you can't miss a day just because of a bit of snow.

"Everyone I met at Kildangan thought it was the best idea they've ever seen. They were coming out of the covering shed and taking videos and pictures of me!"

Aside from reaching for the keys to the tractor, much of the remainder of Oghill House Stud's day was carried out as normal, with foals and mares having an hour or two of exercise before heading back indoors to stay warm.

Hyland said: "You just try and keep everything as smooth as normal. You do get a little bit slowed up with with snow but it's just a case of keeping things ticking over. In terms of the foals we wouldn't let a foal out who was born last night or who is two days old out.

"If they are ten or 11 days old you'd let them out to have a bit of a run as there immune system is stronger and they'd be able to handle the snow."

Hyland added: "Friday's meant to be the worst of it. We'll try to plough up the snow in the yard to get rid of it so we can get the horses to the horse walker.

"We have plenty of salt on the ground which will help clear the snow too and we'll keep an eye out for frozen water troughs - we break them so the stock gets plenty of water."

Across the Irish Sea, Cheveley Park Stud was one of a number of operations in Newmarket to have been blanketed by snow on Wednesday.

But it was business as usual according to managing director Chris Richardson, who said: "We've had close to three inches of snow now but we're managing.

"We are turning the foals and mares out for an hour or so as the mares are much happier and calmer to be out grazing with a bit of hay. It is cold but it's amazing how resilient the thoroughbred breed is."

Home to a number of stallions, including the top-class Pivotal and exciting new recruit Ulysees, Cheveley Park's covering schedule has been kept to a normal timeframe.

Richardson added: "We have had a couple of mares from further afield cancel but generally the roads around Newmarket are pretty good.

"Many of the horses walking in to the stallions are from local stud farms."