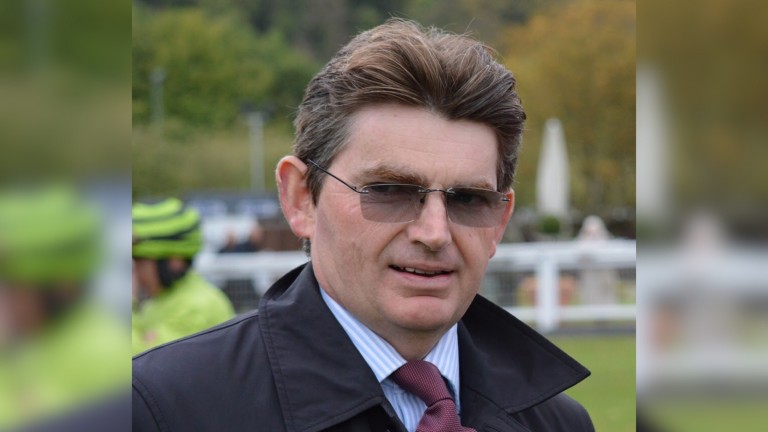 Richard Ryan - recently appointed to the newly created role of horses in training agent for Goffs UK - is optimistic about the next chapter of his career as he moves away from assisting trainers to sourcing up-and-coming talent for his new employer.

Ryan will target entries for Goffs UK's six horses in training sales each year and provide an increased Goffs UK presence on British racecourses throughout the season.

"It's an exciting project and I can't wait to see how the year goes," says the 48-year-old Ryan. "We've got a number of horses in training sales representing both codes and boutique sales which are really taking off in a big way. They're probably the way forward for the upper end of the market. It suits the owners and trainers to buy at the big festivals.

"There are two strings to every bow at any auction. Not only do you need the right horses at the sale, you have to have the right customers to acquire those horses at the sales. It's very important to inform clients about which horses are going to be where, so they can sort diaries out."

British point-to-points are also hot on the agenda and Ryan is pleased that the British pointing scene is gaining a strong foothold, with Blackbow and Santini among its recent star graduates.

"The British point-to-point scene is taking off and I can see it starting to mimic the Irish point-to-points," he says. "There aren't enough maiden chases in British points. There are a few and the winners of those do go on to do better things under rules. Once everybody realises the market and the strength that's there, it will take off to an even greater extent."

Ryan, whose father rode in the late 40s and early 50s, has served as assistant to Ian Williams and the late Terry Mills, as well stints with Charlie Gordon-Watson in London, Hart Hill Stud, Juddmonte Farms and Whitsbury Manor Stud.

"I grew up in a racing household," recalls Ryan. "The walls had plenty of pictures on and there was always racing on the TV. I became a sponge in terms of enjoying the whole thing - the statistics, pedigrees and details. I got involved in the industry from an early age, though all my siblings are in the medical profession!"

Ryan also cites Joss Collins of the BBA and agent Richard Galpin as big influences on his career.

"Joss gave me a piece of paper with a career plan, and he said 'I think if you follow this, you'll go far'. I tried very much to do that and to a large extent I did, in terms of doing yearlings, mares and foals, and handling horses of every age.

"Richard was one of the best agents I've ever seen at work. His approach and work ethic at a sale was outstanding. His output - he instilled in me that's the norm and what you have to produce to be effective in the industry. He had a brilliant eye and drilled the key things he loved in a horse into his assistants."

Mills, who had built up a haulage and waste disposal business in London, transitioned from owner to trainer in 1993, when he took out his licence at Loretta Lodge in Epsom, with Ryan joining him as assistant the same year.

The yard burst on to the scene, with Bobzao winning the Hardwicke Stakes the following year. More Royal Ascot success followed with Mitcham winning the 1999 King's Stand Stakes and Norton winning the 2002 Royal Hunt Cup.

Where Or When: "We knew he was a bit special"
Martin Lynch

A first Group 1 win came courtesy of Where Or When in the Queen Elizabeth II Stakes at Ascot in September 2002.

"If Where Or When had been campaigned at solely a mile, which was probably his best trip, he may well have had a much fancier race record," says Ryan. "Another great day was winning the King's Stand at Royal Ascot with Mitcham, who I'd selected."

Positive soundings came from the Loretta Lodge camp in advance of Where Or When's tilt at the QEII Stakes at Ascot, so his 7-1 success came as little surprise to Mills and his assistant.

"To be honest, he'd been murdered, knocked sideways from getting to the line in first place in the Celebration Mile at Goodwood," remembers Ryan.

"Kevin Darley got off and said he'd have won easy if he'd had a clear run, so we knew we weren't far off the very top level. His work was stunning. He was annihilating a smart miler we had rated in the 100s - he was just using him as a poor lead horse and would just scoot away from him off into the distance. We knew he was a bit special.

"Terry was a self-made man and a great worker. He created a thriving empire and everyone who worked for him had the utmost respect for him. He treated everyone with great decency and was firm but fair."

Ryan also assisted Ian Williams, who enjoyed Cheltenham Festival success with Ballyalton in 2016, the same time Sir Maximilian was competing for the yard in the leading competitive sprints.

"Ian is very capable with his runners under both codes and is a great placer of horses, with a very strong team behind him," says Ryan.

"Sir Maximilian is a smashing, tough little horse and loves the game - even now I believe, he's still a very enthusiastic worker at home. He's had his problems but Ian has handled him very skilfully.

Looking ahead to the future and his new role, Ryan says: "The team at Goffs UK are so forward-thinking, energetic and enthusiastic. They're impressive in every department and that's not something said lightly. I've been around enough to recognise it when I see it and it's quite infectious.

"Goffs UK have a great team of agents with Filip Zwicky in Scandinavia and Gianluca di Castelnuovo in Italy. Derek O'Connor is a fantastic jockey in Ireland and a great man to have on the team, along with Caroline [Kenneally] and Michael [Moore]. I'm delighted to be part of such a successful and renowned team."

Billesdon Brook one for all breeders operating on a budget

Coolmore pursuit of Deep Impact pays off with 2,000 Guineas success

FIRST PUBLISHED 6:02PM, MAY 7 2018
If Where Or When had been campaigned at solely a mile, which was probably his best trip, he may well have had a much fancier race record