Son of Zoustar leads the way on second and final day 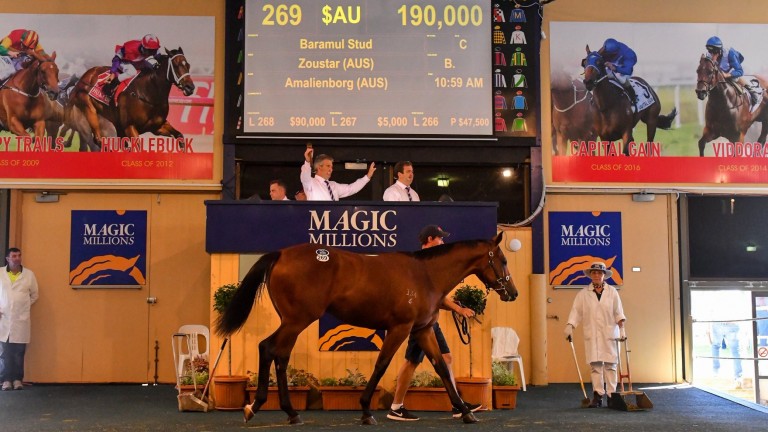 The son of Zoustar who went the way of Western Australian agent John Chalmers
Magic Millions
1 of 1
By Tim Rowe 5:43PM, MAR 14 2018

Magic Millions boss Barry Bowditch hailed the "best ever buying bench" at the Adelaide Yearling Sale after the revamped two-day auction finished up on the 2017 sale, with five yearlings making A$150,000 (£85,000/$118,000) or more.

"We had our best ever buying bench here – the international buyers as well as the return of good friends of past years ensured for a really gratifying result," Bowditch said.

"The market probably strengthened today and we have a clearance rate of 84 per cent which is fantastic."

Wednesday's session saw the conclusion of book 1, before book 2 brought about the sale of 123 yearlings for a combined A$1.5 million.

"Vendors are extremely pleased and the results showed that buyers had great confidence in the sale," he said.

"The new two-day format worked extremely well with strong prices continuing through to the Book Two sale late in the afternoon."

With Spirit Of Boom having been all the rage on Tuesday, it was the turn of another sire whose first two-year-olds are creating a big impression to come to the fore on Wednesday as a colt by Zoustar went the way of Western Australia-based agent John Chalmers for A$190,000 (£107,000/$190,000).

Consigned by Baramul Stud, the colt is the sixth living foal out of the juvenile winner Amalienborg, who is a sister to Blue Diamond Stakes winner Danelagh and a half-sister to Group Three winner Cable.

"He was a nice colt who we thought was worth $250,000. He had plenty of size about him without being too heavy," Chalmers said.

"It is a family we know well over in Western Australia because his second dam Palatious was a great mare who won the Cox Stakes and a Perth Cup and raced by Keith Biggs.

"He was a nice horse and thought he was the right one."

FIRST PUBLISHED 5:43PM, MAR 14 2018
Vendors are extremely pleased and the results showed that buyers had great confidence in the sale