Born To Size bound for the West Country after Ascot sale 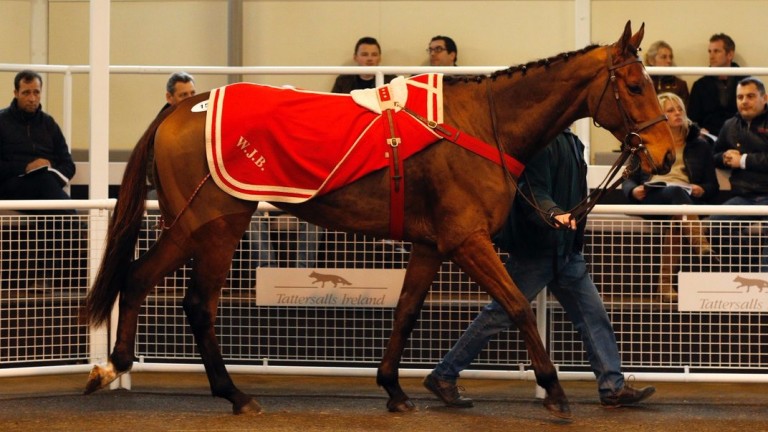 The Tattersalls Ireland Ascot November Sale on Thursday saw a steady day of trade topped by Born To Size, who was picked up by Tom Malone for £35,000.

Offered by Liam Burke's Winacre Stables in County Cork, the five-year-old Sholokhov gelding broke his maiden on his seventh start in a beginners chase at Thurles in mid-October, with a commanding four-length success.

"He'll be coming home with me to the West Country. I bought him on spec. I've a few trainers in mind for him and he should have a nice future as a handicap chaser," said Malone.

Alan King's Barbury Castle Stables sold two of the top-five lots, both wildcards, with Matt Coleman and the US-based Sean Clancy teaming up on the purchase of Gibralfaro for £28,000.

The five-year-old Dalakhani gelding won four Flat races in France and on his next two starts in juvenile hurdles for King, before finishing fourth in the Grade 2 Adonis Juvenile Hurdle and ninth in the Triumph Hurdle.

He also placed in a number of valuable handicap hurdles, and was last seen finishing third to Modus in a Bangor novices' chase at the end of October.

"He was bought together with Sean Clancy, the former champion jumps jockey in the US and bloodstock agent," said Matt Coleman, who was on his way to Fairyhouse for the Tattersalls Ireland Flat Foal and Breeding-Stock Sale. "He'll go jumps racing in the US, perhaps in Maryland.

"He displayed some very good form, both this season and last, but has got very high in the handicap. He showed he could compete in Graded hurdles and should appeal to the US market."

Coleman points to Dawalan as a recent example of the partnership's success, a classy handicap hurdler for Nicky Henderson who was later trained by Cyril Murphy to win the Grand National Hurdle and the Colonial Cup.

Alice Vaughan Jones secured the other offering from Barbury Castle when going to £18,000 to secure Thomas Shelby, who has placed twice in eight starts for the same connections as Gibralfaro.

Peter Fahey, meanwhile, went to £25,000 to secure Wedding Photo from the Godolphin draft, a three-year-old Lonhro filly who finished sixth for trainer Saeed Bin Suroor on debut at Chelmsford in September.

"A wide selection of customers arrived at the Tattersalls Ireland Ascot sales ring today representing a number of European countries and competed with domestic trainers and agents for predominantly form horses," said Richard Pugh, director of horses in training sales at Tattersalls Ireland.

"There is an appetite at Ascot for form horses and performing point-to-pointers and we will continue to work hard to attract these types, focusing on the next sale at Ascot on Monday, December 11."

FIRST PUBLISHED 6:37PM, NOV 9 2017
I bought him on spec. I've a few trainers in mind for him and he should have a nice future as a handicap chaser