James Thomas sees round two between the superpowers 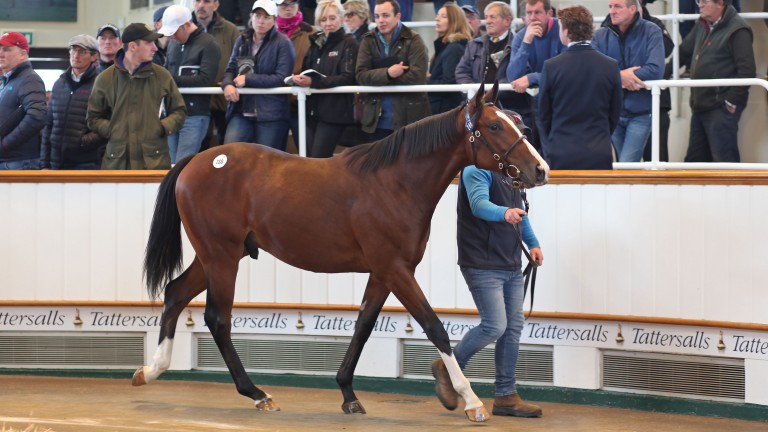 A new day but the same result at Tattersalls, as Godolphin saw off arch rivals Coolmore to add Golden Horn's Frankel half-brother to Sheikh Mohammed's string with a bid of 3,100,000gns midway through day two of Book 1 of the October Yearling Sale.

On day one the two teams had clashed over the Dubawi half-brother to Barney Roy, who went the way of Godolphin at 3,600,000gns, and as the respective camps lined up, separated only by the partition in the gangway, it soon became apparent that round two was on the cards.

Alastair Donald and Chad Brown also played their part in driving the price into session-topping territory, but that pair had tapped out by the time the protagonists renewed their sales ring arm wrestle.

It seemed as though Anthony Stroud, huddled with David Loder, had played the winning hand when he pushed the price from 1,800,000gns to 2,000,000gns. But, after a lengthy pause and with all eyes on the Coolmore man, MV Magnier, nonchalantly chewing gum in the packed gateway, eventually responded with a casual nod of the head.

Just a few yards away, the move was mirrored by Stroud.

After some seven-figure toing and froing, Magnier paused for thought once more at the 2,600,000gns mark. However, after a short caucus with David Wachman and Paul Shanahan, he took the cue when auctioneer Simon Kerins looked in his direction and asked: "One if you like?"

After Stroud had again wasted little time in firing back a 100,000gns increase of his own, Magnier tried to up the ante.

"At two million eight I sell behind the far partition - do you want to round it up?" invited Kerins. Magnier responded in the affirmative. But even a bid of 3,000,000gns was not enough to deter Stroud, and once Magnier had turned his back on proceedings the gavel came down in Godolphin's favour.

"He looked really well and has an outstanding pedigree," said Stroud of the Norelands Stud-consigned youngster. "We stand Golden Horn and he's looking a promising stallion. This colt is an exceptional-looking horse and it's not often you get the opportunity to buy a half-brother to a Derby winner by such a great sire." 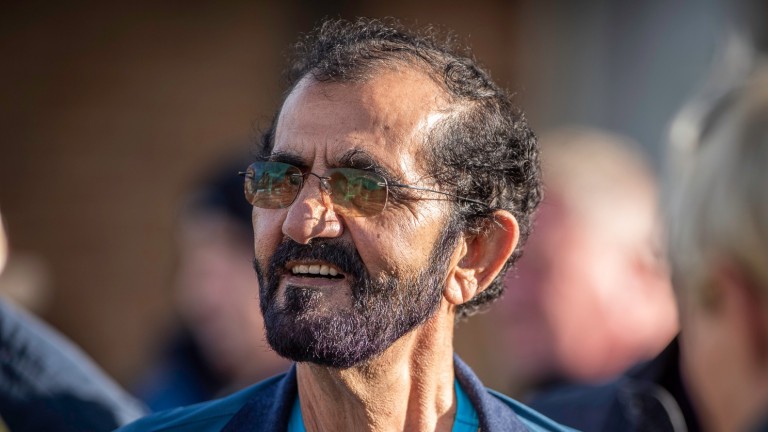 Sheikh Mohammed on the Tattersalls sales ground on Wednesday
Tattersalls

A flashier model than his four-time Group 1-winning half-brother, with a white blaze and two white socks, the colt is also a sibling to the Listed-winning Champs Elysees filly Eastern Belle and the two-year-old Galileo colt Arrow Of Gold, who sold to Kevin Ryan and Stephen Hillen for 450,000gns during last year's Book 1.

Those high-achievers are out of the unraced Dubai Destination mare Fleche D'Or, who left the ownership of owner-breeder Anthony Oppenheimer when sold to the BBA Ireland for 62,000gns in 2012, the year Golden Horn was foaled.

The son of Cape Cross was retained by Anthony Oppenheimer at 190,000gns when offered at Book 1 in 2013, a move that was vindicated in spectacular fashion when, under the tutelage of John Gosden, Golden Horn went on to land the Derby, Coral-Eclipse, Irish Champion Stakes and Prix de l'Arc de Triomphe.

Golden Horn now resides at Darley's Dalham Hall Stud, from where his stallion career has made a bright start, with his debut two-year-olds including Sweet Solera Stakes winner West End Girl, who is due to appear in the bet365 Fillies' Mile on Friday, and Italian Listed scorer Festive Star.

Coln Valley's King of the ring

Godolphin's show of sales ring strength continued a little over an hour later when Stroud saw off a determined effort from the Phoenix Thoroughbreds and Aquis axis with a final bid of 2,300,000gns for the Kingman colt out of Grace And Favour bred and consigned by Coln Valley Stud.

The dam is a winning Montjeu sister to Gold Cup and Irish Derby hero Fame And Glory, and is one of just six Flat broodmares residing at Nicholas Jones' farm in Gloucestershire. The result is much the best enjoyed by the breeder, whose previous high price came at last year's Book 1, when Stroud Coleman gave 600,000gns for a Showcasing colt.

"You can't expect numbers like that," said a visibly stunned Jones. "A lot of people told me he was a gorgeous individual but you never know if the bidders will show up or not. We were hoping for a good sale but you can't predict something on this scale.

"Ian Emes, my stud manager of 16 years, must take all the credit. He foaled this colt and has done all the prep work. He's a top man and we're very lucky to have him at Coln Valley." 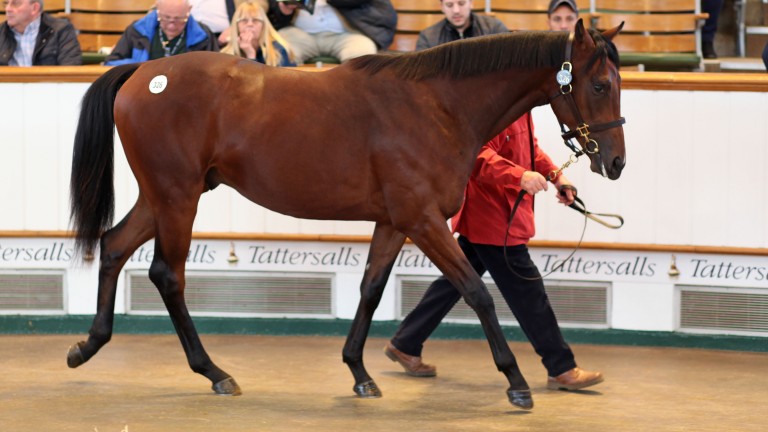 The colt is the second foal out of his dam, whose first, Game And Set, won a Newbury maiden earlier in the year. He is a grandson of Gryada, who joined the Coln Valley fold for 180,000gns in 2006. Gryada is also granddam of Legatissimo.

The colt is the third seven-figure yearling by rising star sire Kingman, after the 1,700,000gns All Our Tomorrows and the 1,050,000gns Cormorant.

Despite Kingman's current standing as arguably the most exciting young sire in Europe, Jones said the decision to use the Banstead Manor Stud resident was not entirely straightforward back in 2017.

"It wasn't that easy a decision to use Kingman given it was his third season, and using any stallion in his third season can be a risk," said Jones. "But I think we'll have to use him again now."

Godolphin's spree continued apace as evening set in, with Stroud going to 1,100,000gns for the Galileo colt out of Jacqueline Quest, and therefore a brother to Godolphin's Line Of Duty, offered by New England Stud.

Coolmore may have missed out on both session-toppers so far at this year's Book 1, but they enjoyed better fortune when Magnier struck a winning bid of 1,300,000gns for the Siyouni half-brother to Magna Grecia.

Bred by Bob Scarbrough and offered through Norelands Stud, the colt is out of the Group 3-winning Galileo mare Cabaret, who was sold to BBA Ireland for 600,000gns at the conclusion of her racing days.

"It's great for Bob Scarbrough, who's bred a lovely horse," said Magnier. "He's by Siyouni, who's a good sire - Le Brivido is a very good horse, as is Peter Brant's Sottsass, who could be a very exciting horse next year. 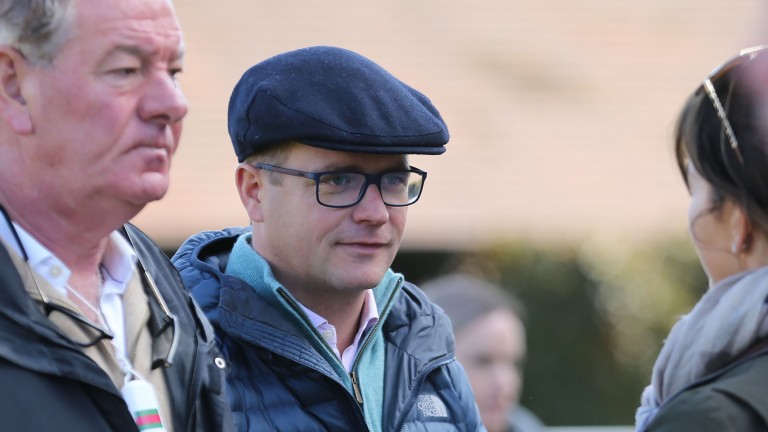 "Obviously he's out of a Galileo mare too, and Galileo just seems to be going from strength to strength in that department. And of course he's a brother to Magna Grecia, who was a very good two-year-old and a Guineas winner."

Magna Grecia hasn't been seen since disappointing in the Irish 2,000 Guineas, but Magnier said the two-time Group 1-winning son of Invincible Spirit could be set to return on Champions Day.

"Hopefully Aidan's going to run him next week in the QEII," he said. "It's too early to say if he'll stay in training next year, but he's going very well at the moment. He's a very special horse so let's hope this fella is as good as him."

A result like no other for Harry McCalmont's Norelands Stud

FIRST PUBLISHED 7:34PM, OCT 9 2019
It's not often you get the opportunity to buy a half-brother to a Derby winner by such a great sire