Book 1 an unexpected source of bargains thanks to Tattersalls bonus 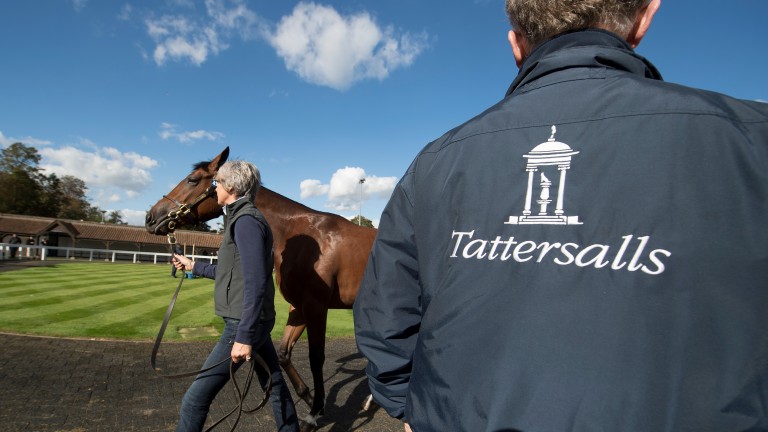 With multi million-guinea yearlings and powerhouse pinhooking coups dominating the headlines at Book 1 of the Tattersalls October Sale, it's easy to forget there are hundreds of lots at the auction each year who sell at the more pragmatic end of the price spectrum.

What might also count as one of bloodstock's better-kept secrets is that, since Tattersalls launched its Book 1 Bonus in 2015, many of the buyers of those yearlings who did not cost the earth have received cash back to the tune of £25,000 by sending them out to win a two-year-old maiden or novice stakes in Britain or Ireland.

There is a one-off payment of £1,500 to enrol a runner to the scheme but with the number of qualifying juvenile races standing at more than 300, there are plenty of chances to quickly claw back a significant portion of the purchase price.

Thus, as counter-intuitive as it may seem for the most prestigious yearling sale in Europe, if not the world, there is value to be had by owners and trainers operating at the middle and lower end of the market.

£25,000 the prize for winning a maiden or novice stakes

Take Shepherd Market, for example; the Reckless Abandon filly was picked up by Fiona Marner Bloodstock for 22,000gns only four lots after a Galileo filly commanded 1,350,000gns at Book 1 in 2016 and six lots before a daughter of Medaglia D'Oro made 600,000gns.

Trained by Clive Cox for Windmill Racing, she recouped her owners' outlay by winning a Chepstow novice auction stakes in August 2017 and took the Listed Prix Coronation at Saint-Cloud last month, not only collecting a fair bit of prize-money in the process but also greatly enhancing her valuation as a potential broodmare.

Some familiar shrewd operators have fared best with such bargain hunting.

His quartet of inexpensive bonus winners comprises Drochaid (40,000gns), who was sold privately to Godolphin after winning two competitive handicaps and running fourth in the King George V Handicap at Royal Ascot; Dutch Treat (40,000gns), who has finished second in the Listed Denford Stakes, fifth in the May Hill and sixth in the Rockfel on her last three starts; Dashing Willoughby (70,000gns), who has won a maiden and finished a neck second in the Haynes, Hanson & Clark Conditions Stakes on his sole two starts; and Crossing The Line (75,000gns), who has struck the last twice including in a valuable fillies' handicap at the York Ebor meeting most recently.

Ger Lyons has also sent out three Book 1 Bonus winners acquired for 100,000gns or less in the past three seasons.

Unsurprisingly, considering much of the big money at Book 1 is focused on a small handful of elite sires, there is a wide range of names responsible for supplying those 56 successful bonus winners from the more affordable end of the market. Only Mayson and Nathaniel have been represented by three each.

Eyecatchingly, Nathaniel has three up for grabs at Book 1 next week, and they might even also be selling in the afterglow of the sire's daughter Enable making it back-to-back Arc victories.

Tattersalls marketing director Jimmy George says: "For obvious reasons, the Book 1 Bonus has been incredibly well received from the outset. Owners and trainers who previously felt Book 1 was out of reach now focus on the sale for the £25,000 bonuses and find that it genuinely is not just a sale for the big battalions.

"For so many owners with budgets around the 50,000gns level to have won around £35,000 for winning their maidens is fantastic and most importantly it brings them back to Book 1 of the October Yearling Sale.”

Book 1 takes place in Newmarket from Tuesday to Wednesday with sessions starting at 11am each day.

FIRST PUBLISHED 8:24PM, OCT 4 2018
Thus, as counter-intuitive as it may seem for the most prestigious yearling sale in Europe, if not the world, there is value to be had