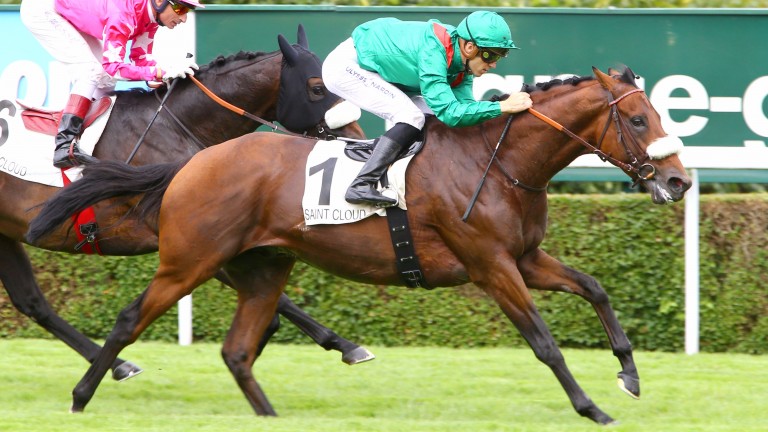 There will surely be no better bred new recruit to the European stallion ranks next year than Zarak, who has been retired to his owner-breeder the Aga Khan's Haras de Bonneval in Normandy.

Zarak – the only one of Zarkava's six foals of racing age to have graced a racecourse – upheld family honour when sent out by his dam's trainer Alain de Royer-Dupre to win four races including a Deauville maiden on his sole start at two, the Dubai Millennium Stakes at Meydan in February and the Grand Prix de Saint-Cloud, earning him precious Group 1 laurels, in July.

Zarak also found only Almanzor too good in the Prix du Jockey Club, finished second in the Prix Ganay and fourth in the Dubai Turf. He signed off his career with a no-show behind Enable in the Prix de l'Arc de Triomphe this month.

Georges Rimaud, manager of the Aga Khan Studs in France, said: “Zarak will be a great addition to our roster of stallions. He's a dream come true for a breeder, being a Group 1 winner out of a champion and by an excellent stallion.

“He was a top class racehorse who showed a great turn of foot and he's an attractive individual who is short-coupled and strongly built. We're delighted to offer such an exciting stallion to breeders. Zarkava’s legacy is set to continue through her son.”

Zarak extends Dubawi's influence in the stallion ranks. The Darley flagbearer is also responsible for Makfi, who formerly stood at Bonneval and supplied French Classic winner Make Believe, and Poet's Voice, who has been represented by Irish Champion Stakes second Poet's Word and is flying with his two-year-olds – 27 winners and counting – this year.

A fee and syndication details for Zarak will be announced soon.

Spill The Beans to reverse shuttle to National Stud in Newmarket

FIRST PUBLISHED 12:43PM, OCT 6 2017
He's a dream come true for a breeder, being a Group 1 winner out of a champion and by an excellent stallion