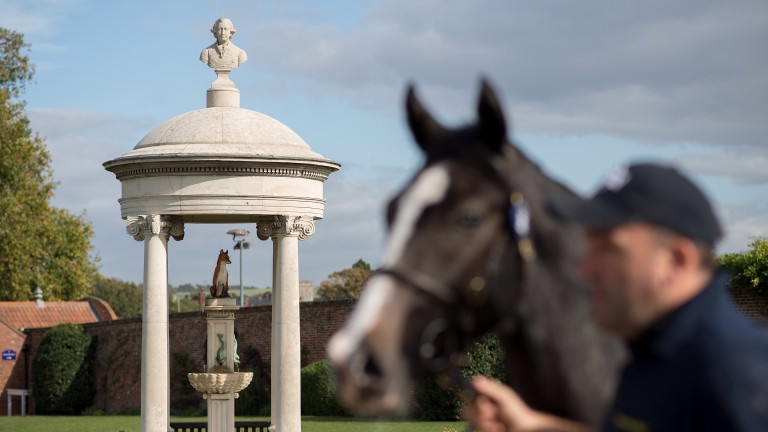 Acclamation line in the ascendancy

The rise of Acclamation and Dark Angel has been nothing short of a phenomenon. It was only ten years ago that Acclamation was crowned champion first-season sire – with Middle Park Stakes winner Dark Angel the crowning glory of that achievement – but, thanks to the son's retirement to stud at the end of his two-year-old season and his equally impressive start with his early runners, this sire-line has burgeoned in a short space of time.

After Acclamation supplied Prix de la Foret winner Aclaim and Dark Angel's son Battaash bolted up in the Prix de l'Abbaye elsewhere on the Arc undercard on Sunday, the pair returned the sixth- and seventh-highest average price at Book 1 of the Tattersalls October Yearling Sale among sires with three or more sold.

Three lots by Acclamation, conceived at a fee of €35,000 at Rathbarry Stud, sold for an average of 350,000gns with a high of 500,000gns paid by Charlie Gordon-Watson for a half-brother to Cheveley Park Stakes third Baileys Jubilee.

Book 1 brought home just how Yeomanstown Stud has hit the jackpot with its star sire Dark Angel. It took five by him to Tattersalls this week and together they sold for 2,780,000gns.

Besides that sister to Frozen Angel, it also sold a brother to Norfolk Stakes second Log Out Island to Shadwell for 750,000gns and a colt out of Tamarisk – a daughter of Selkirk and Cheveley Park Stakes second Tanami bought to join the Yeomanstown broodmare band for just 35,000gns – to Sackville Donald again for 625,000gns.

Consigning blueblooded lots to the yearling sales is much more than just running a brush through manes and tails before the big event. In the first place, you have to be able to convince breeders to entrust you with their invaluable stock; then you must spend weeks monitoring the physical development of your charges, adjusting feed and exercise to bring them to peak physical condition in time for those few critical days on the sales grounds, where you also have to manage a large number of horses and staff.

The operation, whose drafts are finely tuned by Carolyn Warren, has now taken that plaudit seven times since 2007. In a remarkable feat of consistency, it finished second in the list of leading consignors by gross receipts on the other four occasions.

Norris Bloodstock fields much smaller drafts to Book 1 but, having overseen the sale of the 4,000,000gns top lot by Galileo out of Dank on behalf of breeder James Wigan, the operation was the leading vendor at the sale by average with more than one sold.

Norris Bloodstock accomplished that for the second year running, having sold last year's 2,600,000gns Book 1 joint-top lot, subsequent Group 3 winner Glorious Journey, on behalf of Philippa Cooper. The term 'boutique' is overused in bloodstock, but Liam and Jenny Norris can legitimately claim it for their operation.

Demand for the most in-demand lots has never been so frenzied, with the deepest-pocketed buyers regularly pushing each other to huge prices for those most alluring lots.

A permutation of top-end bidders that had long been out of commission but has sparked back into life – that of Godolphin versus Coolmore – helped ensure there were 17 lots who achieved seven-figure sums at Book 1 this year: the same number as were sold in the 11 renewals of the auction from 2003 until 2013 combined.

For the record, and in an illustration of how all the big money is concentrated towards only a few elite sires, the 17 million-sellers at Tattersalls this week were by just six different sires: eight were by Dubawi; four by Galileo; two by Frankel; and one each by Invincible Spirit, Kingman and Sea The Stars.

Considering stallion masters will set next year's covering fees based on the health of the yearling market, and that breeding associations have issues to work on with their partners in racing and governments and could do without appearing to represent the interests of a privileged few, let us hope that those 17 lots – a tiny fraction of the horses who will go under the hammer this year – do not come to represent the whole of the bloodstock industry in 2017.

Look at the other end of the list of prices at Book 1 this week and you will find more than 17 yearlings who failed to cover the cost of their production.

FIRST PUBLISHED 6:50PM, OCT 6 2017
Look at the other end of the list of prices at Book 1 and you will find more than 17 yearlings who failed to cover the cost of their production