Insight ONE FOR THE UNDERDOG

Martin Stevens catches up with John Tuthill, breeder of Persuasive 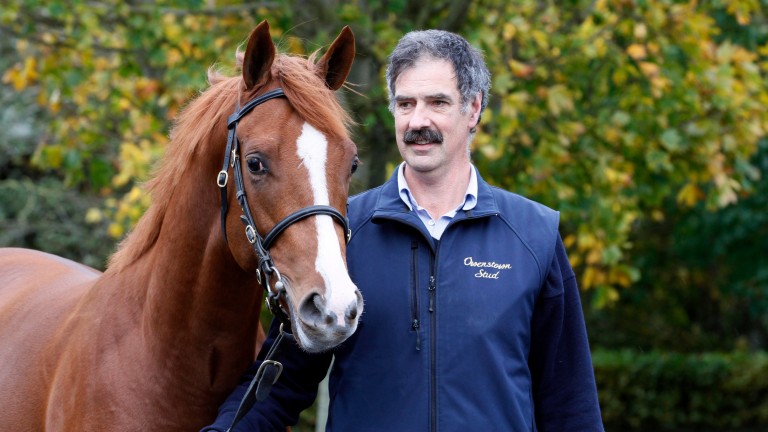 John Tuthill with the Dragon Pulse yearling colt out of a half-sister to Choose Me, the dam of Persuasive, at Goffs on Tuesday
Peter Mooney
1 of 1
UPDATED 6:50PM, FEB 6 2018

With Persuasive having weaved her way to victory in the Queen Elizabeth II Stakes at Ascot on Saturday, small breeder John Tuthill has now supplied two winners of the mile showpiece since it was first staged under the banner of Qipco British Champions Day in 2011.

Tuthill is far too modest to point out, so I will say it for him: that is double the number of QEII winners that Coolmore or Juddmonte have bred in that timeframe, and two more than many other organisations with far greater resources have managed.

“For a smaller operator like myself it's just the stuff of dreams,” Tuthill says at Goffs, where Persuasive was bought by owner Cheveley Park Stud for €180,000 as a yearling at the Orby Sale, and where a colt closely related to her will come under the hammer on Thursday. 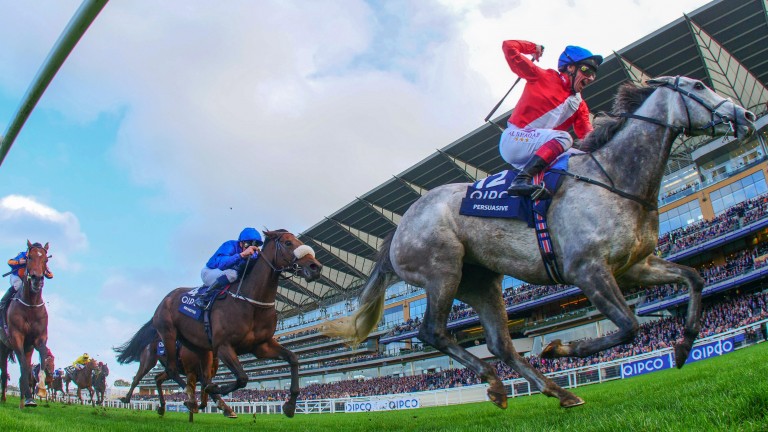 “It's hard to emphasise how extraordinary it feels, especially as Persuasive was taking on the colts. It's quite humbling.”

The softly spoken Tuthill admits he did raise his voice to roar home the filly he raised as he watched the action at Ascot on television at home. And he was able to cheer on his second QEII winner with more unrestrained joy than his first, which came with a bittersweet edge: for, while Persuasive's outstanding young dam Choose Me was safely at home carrying a foal by one of Europe's best sires, Excelebration's dam Sun Shower had been sold to India for just €10,000 before her son was able to demonstrate what an able producer she was.

Persuasive is second-generation Owenstown Stud as her granddam Hecuba, a Juddmonte-bred daughter of Hector Protector, was bought in foal to Vettori for 48,000gns at Tattersalls in 2004.

“She was an attractive filly with interesting breeding, so we took a chance on her,” says Tuthill. “Vettori wasn't quite the direction we wanted to go in, so we sent her to Choisir next and the resultant filly – Choose Me – was injured prior to the sales, which is how I ended up keeping her.”

Choose Me carried the silks of Tuthill's late aunt Averil Whitehead and won four races including the Listed Fairy Bridge Stakes only months before her owner's death.

“Between Evening Time [a dual Listed winner in the same ownership] and Choose Me, I'd say they extended Miss Whitehead's life by around five years,” reflects Tuthill, who bred from Evening Time this year's Group 3 Ballyogan Stakes winner Penny Pepper.

Choose Me has not put a foot wrong as a broodmare at Owenstown Stud. Her first foal Amazour, a son of Azamour, is a talented handicapper for Ismail Mohammed with a peak Racing Post Rating of 108; her second, Persuasive, has been retired with six wins from ten starts and an RPR of 121 for taking the notable scalps of Ribchester and Churchill in the QEII; and her third, the three-year-old Dream Ahead filly Tisbutadream, was sold to King Power Racing for £400,000 at the Goffs London Sale and has won the Listed Coral Distaff and gained another four black-type placings for an RPR of 105 since then.

Choose Me has a two-year-old filly by Iffraaj bought by Cathy Grassick for €150,000 last year, while her yearling colt by Slade Power was bought by Sackville Donald for €100,000 at Goffs last month.

“You can never predict how well a mare will do, but it's a very good family going back to the champion Cairn Rouge, one that has borne fruit in every generation and luckily that's still the case,” says Tuthill. 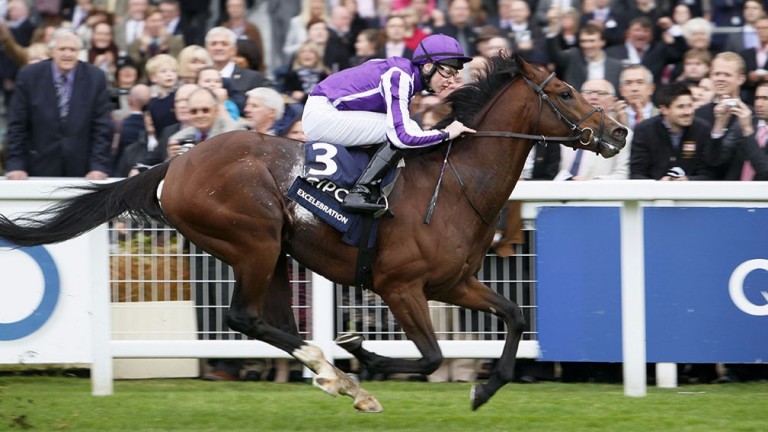 Excelebration: bred by John Tuthill, but his dam was sold before he emerged
Mark Cranham

The mare has no foal but is pregnant to the brilliant Dubawi as part of a foal share agreement with Darley.

“I can't afford a Dubawi nomination outright,” says Tuthill. “But I thought at the start of the year this was my one opportunity to go for a really top-end cover because Persuasive had been Group 1-placed in the Matron Stakes. I wouldn't wish to make too much of it, as I couldn't have done it without a foal share.”

The quest is now to breed a filly from Choose Me to retain and continue the line. That said, Tuthill has several relations to her, including Aphrodite's Angel, a half-sister to the mare by Persuasive's sire Dark Angel who showed ability on debut behind Contingent in a hot-looking maiden at Leopardstown on Sunday, and Grecian Artisan, another half-sister who is the dam of the Dragon Pulse colt being sold by Owenstown Stud at Goffs this week.

Either way, the breeder won't be making the same mistake with Choose Me as he did with Sun Shower. “I won't be in any hurry to let this one go,” he smiles, although it is important to stress that Excelebration's dam was only reluctantly discarded in exceptional circumstances.

“It was 2008 and the economy had collapsed – people were contracting the size of their operations,” remembers Tuthill. “We reduced the size of the stud because the word then was, with this kind of calamitous crash, who on earth was going to be able to afford to race horses?

“Sun Shower was a wilderness mare at the time; she didn't really have anything exciting about her. We took two mares to the sale: one was my wife's favourite, the other mine. Mine didn't get a bid, her one sold for €10,000.”

The Owenstown Stud broodmare band was whittled down to just eight mares during those desperate times but is back up to 18 – “way too many!” – although the head count was swollen by Tuthill taking on some of Whitehead's stock after she died in 2010.

Whitehead bred the great stallion Indian Ridge among a clutch of top-class runners and her nephew has followed the example by breeding the likes of Excelebration and Persuasive.

That string of 18 mares is bound to bring Tuthill even more success. Not that he will shout about it.

FIRST PUBLISHED 6:50PM, FEB 6 2018
For a smaller operator like myself it's just the stuff of dreams

Charlie Appleby outlines plans for top three-year-olds Adayar and Hurricane Lane Highland Reel's nephew Angel Bleu upholds family honour in Vintage Stakes The King George was great but this Saturday at Ascot is far more important Forgive the gushing enthusiasm but I feel like I have seen something special Who is better - Hurricane Lane or Adayar? Our experts have their say Zain Claudette holds on to provide Ray Dawson with emotional first Group win