The €1,700 jumps store who has become a first-rate Flat broodmare 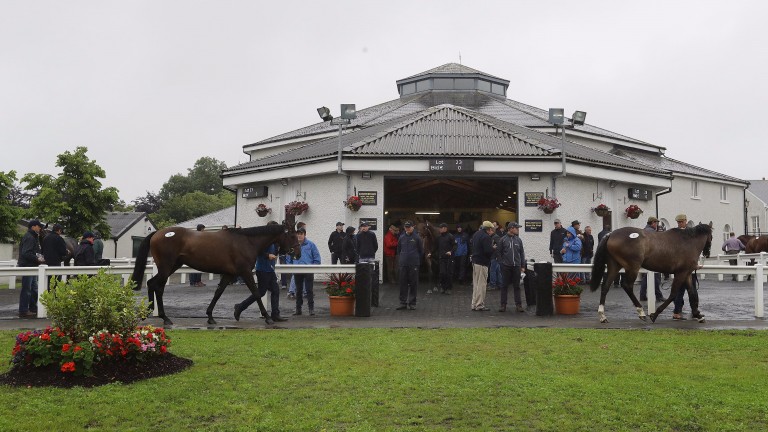 Tattersalls Ireland: what gems might the catalogue for the August National Hunt Sale contain?
Lorraine O'Sullivan
1 of 1
By Martin Stevens 3:11PM, AUG 4 2017

Calling all Flat breeders: are you looking to replenish your broodmare band? Then make sure you consult the catalogue for the coming Tattersalls Ireland August National Hunt Sale.

No, really. You read correctly. It may sound counter-intuitive, but a mare who is emerging as one of the best young producers in Europe was sourced from that very auction of jumps stores. What's more, she cost less than €2,000.

Retired chartered surveyor John Studd – father of jump jockey Charlie – paid peanuts for Exit The Straight as a three-year-old out of the ring when she was presented by Boardsmill Stud at Fairyhouse in the depths of the recession in August 2009.

The daughter of Exit To Nowhere has since produced stakes winners with two of her first three foals: Calling Out, a gelding by Martaline who won the Listed Criterium du Languedoc at two and was not beaten far in the Prix Jean Prat for Jean-Pierre Gauvin before showing useful form for David Simcock; and Vue Fantastique, his Fabrice Chappet-trained half-sister by Motivator who was runner-up in the Prix Saint-Alary in May and was a surprise winner of the Group 3 Prix de Psyche at Deauville on Saturday.

Studd, who owned horses including the smart chaser Kenzo III under the Killinghurst Park Stud banner, takes up the tale: "I went over to Ireland for the August National Hunt Sale and saw this three-year-old filly who looked nice. She just had a certain presence about her, so I asked a friend what they thought and they said Exit To Nowhere had wind trouble and they wouldn't touch it. But I liked her and I bought her after the sale for €1,700."

Exit The Straight may not have grown sufficiently quickly to earn her place in the more premier store sales in June, but it was hard to pick any holes in her pedigree.

A further enhancement to the page arrived when Exit The Straight's younger half-brother Mazameer scored in the Group 3 Prix de Cabourg and finished a fair sixth in the Prix Morny three years after her purchase.

With Exit The Straight's sire and many of her maternal relations having excelled in France, she crossed the Channel to go into training with Etienne Leenders after being pre-trained by Richard Pitman in Britain and was reported to be going well until she sustained a knee injury and was retired.

Exit The Straight was covered by Martaline in her first two seasons at stud – "he's a cracking jumping stallion but also gets some good Flat horses as he's got such a great damline,” says Studd – and the resultant foals were Calling Out, a €22,000 Arqana October yearling, and Nanny Cay, a placed filly who made €70,000 at the same sale after her year-old brother had shown talent at two.

Then came the four-year-old Kapgarde filly Bella Rugosa, who was retained by Studd but "gave too much of herself and would blow herself up, so has been retired". Next off the production line were the classy Vue Fantastique and an Authorized two-year-old filly bought by Jean-Claude Rouget for €40,000 last October, now named Primula and as yet unraced.

"I started with good jumping stallions who could get a Flat horse and then moved on to Motivator and Authorized, good Flat stallions who can get a good jumper, but I've now gone purely for Flat," explains Studd. "So the mare has a yearling filly by Le Havre and she's in foal to Olympic Glory. We're now putting a bit of quality onto her – not that the others sires weren't that."

Vue Fantastique's victory on Saturday was timely, as that half-sister by Le Havre – the most expensive sire in France having supplied two dual Classic winners in Avenir Certain and La Cressonniere from his first three crops – is entered in this month's Arqana August Yearling Sale, to be consigned by Haras de Grandcamp.

"The filly should make a fair price – she's very correct and by an extremely popular sire whose fillies are deemed to be better than his colts," says Studd, who owns four broodmares, all based in France. "Luckily I'm in a position that if she doesn't make the price I think she should, I can keep her, and after seeing what Calling Out and Vue Fantastique have done, perhaps I should!"

Reflecting on his feat of unearthing a Flat broodmare of such immense value in a sale whose most famous recent graduates are Thistlecrack and River Wylde, Studd says: "It's very difficult to find broodmares who have good conformation and attractive pedigrees, so perhaps some lateral thinking is needed to get hold of them.

"By going to a National Hunt sale with my eyes open, with a little luck and a bit of hope, I managed to find one.

"Every catalogue for every sale will contain a good-value horse and if you have the time go through them with a fine-tooth comb – which I do now I'm retired from business – you can find the odd nugget."

It certainly makes you think. With the standard of stallion marketed for the jumps having improved over the decades – Pour Moi, the sire of this year's Derby hero Wings Of Eagles, is a member of the Coolmore National Hunt ranks these days, don't forget – and Flat middle-distance breeding outside of mating Classic winners to Galileo and Dubawi generally considered uncommercial, there has been some convergence in breeding jumpers and Flat horses who appreciate a trip.

Perhaps Exit The Straight will turn out to be no one-off, and shopping for future Flat broodmares at store sales might not be as hare-brained as it initially sounds.

FIRST PUBLISHED 6:07PM, AUG 2 2017
It's very difficult to find broodmares who have good conformation and attractive pedigrees, so perhaps some lateral thinking is needed to buy one