Not A Single Doubt filly sells for A$280,000 during Sunday's session 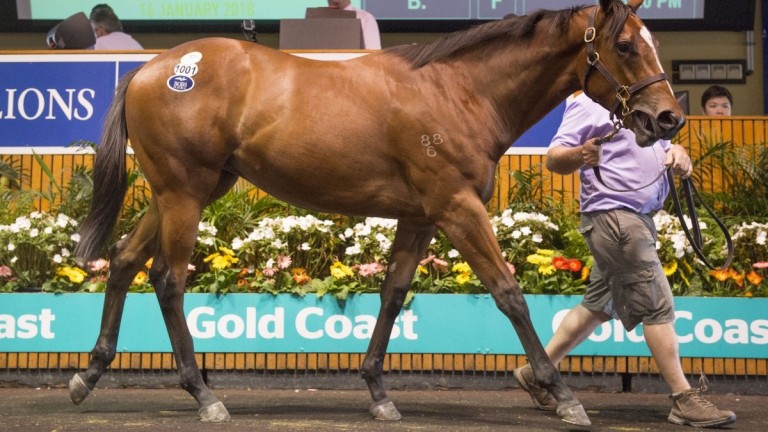 The Not A Single Doubt filly snapped up by Henry Plumptre and Cambridge Stud for A$280,000
Magic Millions
1 of 1
By Lydia Symonds and Tim Rowe of ANZ Bloodstock News UPDATED 12:18PM, JAN 17 2018

Henry Plumptre - the recently installed chief executive of Cambridge Stud in New Zealand - secured Not A Single Doubt filly for A$280,000 (£162,000/€182,000) late on Sunday, to top the one-day book two of the Magic Millions Gold Coast Yearling Sale.

Acting for Brendan and Jo Lindsay, who recently purchased Cambridge Stud from Sir Patrick and Lady Hogan, Plumptre said the Grandview Stud-consigned filly would remain in Australia to race.

Catalogued as Lot 1001, the filly is the seventh foal out of Miss Victoria, a half-sister to Group 2-winning juvenile and Group 1-producing stallion Domesday, by Red Ransom.

Plumptre said he had missed out on a number of horses in book one by Not A Single Doubt, in which the Arrowfield Stud-based stallion had 32 yearlings sell for an average of A$265,156.

"It was the individual I wanted, not the pedigree, and she is certainly a lovely individual," said Plumptre.

"I don't know what Not A Single Doubt has averaged this week but it would be fairly high and he is obviously a fantastic stallion and we wanted to buy a filly by him and we ended up with her.

"She is an October 26 foal, so she is not going to jump out of the ground and she won't be expected to, but we would love to see her as a three-year-old in some nice races."

Plumptre revealed the filly would be broken in at Scone before joining a trainer in either Sydney or Melbourne.

Kennewell lands I Am Invincible filly

Adelaide-based trainer Lloyd Kennewell went to A$250,000 yesterday to get the last lot by I Am Invincible offered this week, the second highest-priced lot of book two.

Kennewell, who trains Group 1 winner and Magic Millions Snippets scorer Viddora as well as Magic Millions Clockwise Classic winner La Pomme De Pin, both by I Am Invincible, had been underbidder on a filly by the Yarraman Park Stud-based stallion on Saturday night.

That filly was purchased by Tony Gollan and John Foote Bloodstock for A$625,000 but Kennewell chimed in late on Sunday, making just the one winning bid to land the filly.

Offered by Yarraman Park Stud - the leading vendor by average during book one - the filly is the third foal out of stakes-winning Dehere mare Devoirs, a half-sister to Group 3 WA Sires' Produce Stakes winner Debellatio.

Kennewell told ANZ Bloodstock News the I Am Invincible filly reminded him of La Pomme De Pin, who raced three times last year including her victory in the A$200,000 Clockwise Classic.

"We have tried to buy a few (I Am Invincibles) at this sale and I have been ambushed and went to A$600,000 (on Saturday night) and couldn't get one," Kennewell said.

"She was a filly that I liked from day one when I saw her and she reminded me a lot of La Pomme De Pin, to be honest, hence the reason I was on her. I only had the one bid, so it was good to get her with the final call of the hammer."

Kennewell has been buying the progeny of I Am Invincible since his first crop were offered at the yearling sales.

"The landscape has changed a bit with I Am Invincible this season and they are through the roof," he said.

"She is a filly, so has residual value straight away, so hopefully we can get a bit of black type with her and she will be worth really good money."

Departing Magic Millions managing director Vin Cox auctioned the final lot of book two, a Charge Forward colt who sold for A$80,000, and later said this year's book two provided a competitive market and set a new benchmark for the Sunday session of the January sale.

"Today's sale was very competitive all day at every level and it was good to see so many people here trying to buy horses," Cox told ANZ Bloodstock News.

"Houtzen came out of this sale two years ago and it has always been a pretty solid market."

The leading vendor by average (with three or more lots) was Yarraman Park Stud, who sold three yearlings for an average of A$173,333.

Cox leaves Magic Millions this month after seven years at the helm of the Gold Coast-based business to take up the role of managing director for Godolphin Australia.

FIRST PUBLISHED 1:28PM, JAN 14 2018
Houtzen came out of this sale two years ago and it has always been a pretty solid market