Phoenix Thoroughbreds makes its presence felt on the Gold Coast 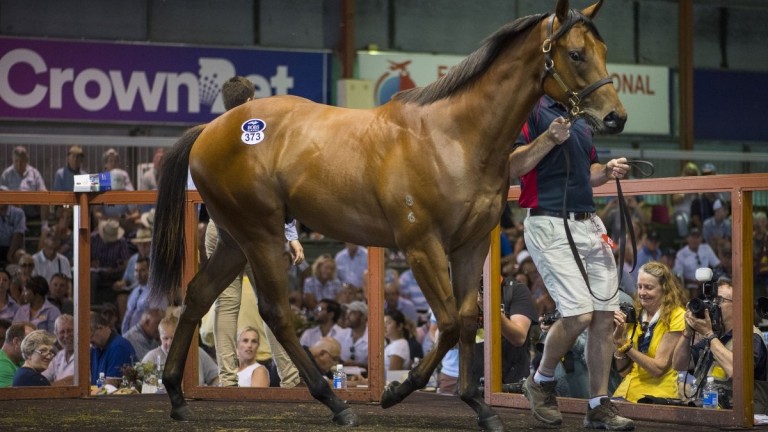 The I Am Invincible colt that sold for $2 million on day two of the Magic Millions Gold Coast Yearling Sale
Magic Millions
1 of 1
By Lydia Symonds and Tim Rowe of ANZ Bloodstock News UPDATED 1:15PM, JAN 12 2018

Strong competition for the brother to Newgate Farm-based stallion Sizzling - by Australia's reigning champion sire Snitzel - lit up the Magic Millions sales ring late on Thursday, with a syndicate made up of Phoenix Thoroughbreds, Aquis Farm, Yulong Investments and Ciaron Maher Bloodstock having to stretch to A$1.6 million to secure the colt.

Caulfield-based trainer Ciaron Maher, who is set to make his return in April after a six-month suspension, will train the colt.

Consigned by Milburn Creek, the colt is the sixth living foal out of the winning and stakes-placed mare Admirelle, who has had four foals to race for two winners, including Sizzling.

The colt's now two-year-old half-brother by I Am Invincible, who is unraced, was sold by Milburn Creek at last year's Magic Millions Gold Coast Yearling Sale for A$900,000 to McEvoy Mitchell Racing, while a brother by Snitzel was sold for A$2,200,000 at the 2015 Inglis Australian Easter Yearling Sale.

Maher was pleased to be entrusted with the colt by the syndicate of investors and believes he has all the credentials to emulate his brother's Group One-winning racetrack performance.

"He is a stallion prospect and is a great type. He has a great temperament and there is also a great group of people in the horse, so hopefully we can turn him into a stallion," Maher said.

The Snitzel colt was one of two seven-figure yearlings sold during day two of the Magic Millions Gold Coast Yearling Sale, with the highest-priced lot - a colt - setting a new benchmark for his sire I Am Invincible at A$2,000,000.

The highest-priced yearling of the sale so far was consigned by Yarraman Park Stud and is the second foal out of the Listed-winning and Group Three-placed mare Tai Tai Tess.

The colt is a half-brother to the Team Hawkes-trained dual winner Echo Jet, who was purchased by Spendthrift from the Yarraman Park draft for A$160,000 at last year's Magic Millions Gold Coast Yearling Sale.

Harry Mitchell from Yarraman Park was delighted with the result, which was a record price for their lynchpin sire I Am Invincible.

"We came up here knowing that he'd be one of the best colts, because he has always been a beautiful horse, but you never expect A$2,000,000," Mitchell said.

Prominent owner Steve Gillard added to his growing band of high-class, well-bred fillies when he went to A$800,000 to secure a yearling by Japan's champion first-season sire and 2013 Horse of the Year Lord Kanaloa, a son of King Kamehameha.

The Arrowfield Stud-consigned filly is the fourth foal out of the unraced Japanese mare Adempiamo, herself a three-quarters sister to Listed winner Peer Gynt and a half-sister to the stakes-placed Felicitar.

The filly was purchased by Newcastle-based trainer Paul Perry for Gillard, who races a number of horses with various trainers around the country including Group Two winner Sweet Sherry.

"I saw her a good six weeks ago and I love her. I thought she was a cracking filly," Perry said. "Lord Kanaloa is a great horse, she is from a great family and they sell for anything over there (in Japan)."

Godolphin made their biggest foray back in to the Australian yearling sales market when Sheikh Mohammed's operation secured a Snitzel filly out of the Blue Diamond Stakes-winning mare Samaready for A$600,000 early on in the second session.

The recent change in policy saw the operation purchase three lots on day two after also taking home a Not A Single Doubt colt for A$200,000 on Wednesday.

"We are here to source top-class racing prospects and we thought she was one of them," Godolphin Australia bloodstock manager Jason Walsh said.

"We are delighted to secure her and very excited about her joining our racing division and ultimately our broodmare band."

Reflecting on the second day of the sale, Magic Millions bloodstock manager Barry Bowditch said: "It was a sensational day's trade from start to finish. Horses were making tremendous money and I can see more of the same tomorrow."

FIRST PUBLISHED 5:16PM, JAN 11 2018
It was a sensational day's trade from start to finish. Horses were making tremendous money and I can see more of the same tomorrow