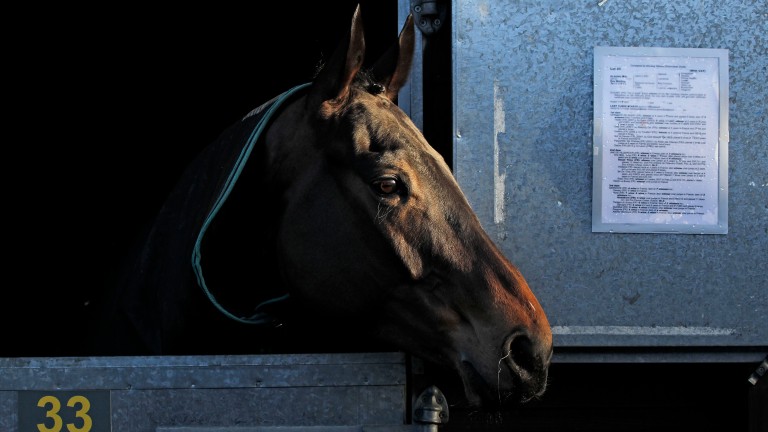 The appetite for winning point-to-pointers shows no signs of abating in 2018 and at the Tattersalls Ireland Cheltenham February Sale on Thursday, trainer Joseph O'Brien parted with a sale-topping £410,000 to secure Dlauro.

Offered by Donnchadh Doyle's Monbeg Stables, the son of Lauro made all to open his account in a five-year-old maiden at Belharbour earlier this month, scoring by an impressive six lengths.

The final price represented a record for a five-year-old pointer and O'Brien, who bought the gelding for an undisclosed client, said: "He's a very good-looking horse who comes from a great producer of horses in Donnchadh Doyle.

"He's a very exciting horse for the future but there's no plans for him at the moment."

Colin Bowe, the master of Milestone Stables, is no stranger to offering a choice National Hunt prospect and he was duly rewarded again earlier in the afternoon when the exciting Envoi Allen went the way of Tom Malone for £400,000 - the second highest-priced lot at Cheltenham on Thursday.

The four-year-old had created considerable buzz in the build up to the sale thanks in part to the exploits of the exciting Samcro, sold by Bowe for £335,000 at the inaugural Goffs UK Aintree Sale in 2016 but Envoi Allen had done his part too, making the perfect start between the flags in a Ballinaboola maiden earlier this month when demolishing the field by ten lengths.

Malone purchased the son of Muhtathir on behalf of Cheveley Park Stud's David and Patricia Thompson - who last year snapped up the Grand National contenders Le Mercurey and Highland Lodge prior to their running in the Aintree showpiece.

"I saw him two weeks ago at Colin's yard," said Malone. "I thought he was a beautiful animal and Colin gave him a high recommendation. I was there at the point-to-point he won and he was very, very impressive. You can't do things like he's done in a point-to-point unless you're exceptional.

"He's going to go into training with Gordon Elliott. Everyone wants the ticket of a Cheltenham horse and the one thing you do get with Irish point-to-pointers is they win Cheltenham festival races - that's what everyone wants to win."

Elsewhere, the combination of Harold Kirk and Willie Mullins were on the mark when the former parted with £290,000 to secure the Suirview Stables-consigned Asterion Forlonge.

A four-year-old who was last seen winning a maiden point-to-point at Oldtown on Sunday, Asterion Forlonge shares his sire with another of Mullins' recruits in Grade 1 scorer Bacardys as both are by Haras de Cercy resident Coastal Path.

Kirk said: "The sire was a help because we have a couple of horses in the stables by Coastal Path and he's a well respected sire in France. I like the way he won his point-to-point - he finished off the race very well - and we've been very lucky buying stock from Pat Doyle too.

"He'll go back to Willie's yard and he'll be a horse for next season."

Richard Pugh, director of horses in training at Tattersalls Ireland, said: "The trade experienced here on Thursday has been phenomenal. To witness two horses make £400,000 or more and a record price for a five-year-old is testament to the results achieved on the track for Cheltenham graduates.

"In the last year, 53 horses sold here have experienced black-type success and this has certainly contributed to the high level of trade experienced here in the sales arena."

FIRST PUBLISHED 5:48PM, FEB 15 2018
He's a very exciting horse for the future but there's no plans for him at the moment

Missing, please help: where are Britain's good chasers after Ascot anti-climax? 'I wouldn't swap him for anything - he's not fancy but he's a good horse' 'He's extraordinary' - Henderson thrilled with Champ ahead of Gold Cup bid Davy Russell loses race to be fit for Cheltenham Festival on medical advice