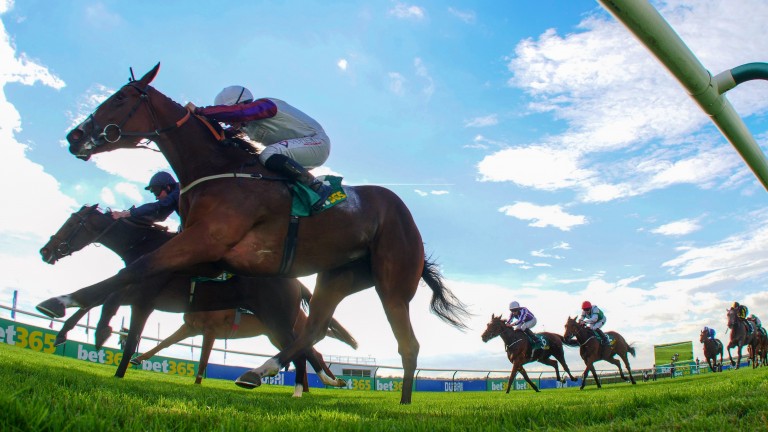 Trainers who excel with inexpensive horses often find themselves a victim of their own success, the top breeders and investors inserting a glass ceiling as they persist with more fashionable yards. Thanks to the commitment of a relative newcomer in John Dance, however, Karl Burke showed on Friday that even an upgrade to a £220,000 yearling will produce commensurate results.

That price, while still hardly touching the stratospheric levels routine at Tattersalls last week, was sufficient to make Laurens the most expensive filly at the Goffs UK Premier Yearling Sale last year. As such, she represented a magnificent dividend on Siyouni's original covering fee of just €7,000. Haras de Bonneval's son of Pivotal – who had meanwhile produced a Classic winner, Ervedya, from his first crop – has since had three consecutive hikes to become France's second most expensive sire at €45,000.

Laurens had much in her favour besides an exciting young sire. Not just the big, rangy physique that literally made the difference on Friday, her lengthier snout denying the diminutive September in the tightest of photos for the Group 1 bet365 Fillies' Mile; but also the sturdy family supporting his dam Recambe, a dual winner by Cape Cross. Together these factors appear to guarantee more to come from Laurens next year.

For Recambe is a half-sister to Peintre Celebre's Hong Kong Derby winner Helene Mascot – known as Salford Mill during his days with David Elsworth, for whom he won the Feilden and finished sixth in the Derby. Their dam, a fairly useful four-time winner by Kahyasi named Razana, had been culled by Darley Studs for 44,000gns; as had her dam, by another elite owner-breeder in the Aga Khan, for just Ir£15,500. 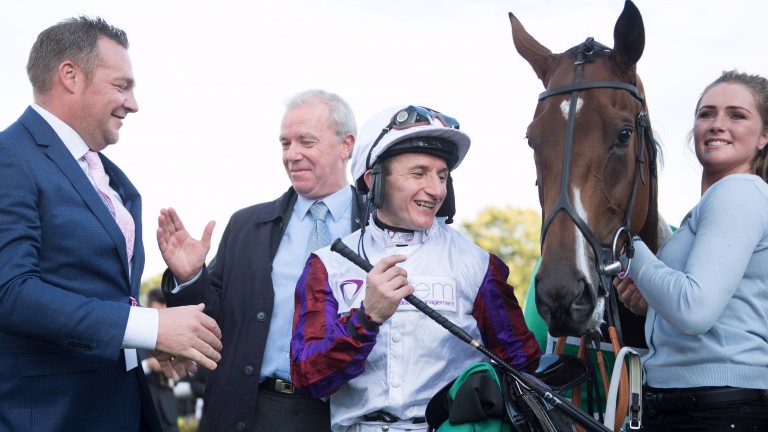 Put it there, pal: John Dance (left) shakes hands with trainer Karl Burke in the winner's enclosure
Edward Whitaker
But Razana was a half-sister to the dams of two Group 1 operators: Irish 2,000 Guineas runner-up Shifting Power; and Prix de l'Opera winner Kinnaird. The latter, like Laurens, also won the May Hill and subsequently produced a Royal Lodge winner in Berkshire, as well as the dam of the Classic-placed Richmond winner, Ivawood. Kinnaird is also a half-sister to Chester Vase winner Mickdaam.

The next dam was a typically doughty Aga Khan proposition: a St Paddy half-sister to a Prix du Cadran runner-up, who also produced an Irish Leger runner-up. It must be gratifying for the owner of Siyouni to see this bedrock sparked into life by a sire whose CV has been further enhanced this season by Le Brivido – who suffered his sole defeat when beaten a whisker for the French Guineas, and gained impressive consolation in the Jersey.

Whatever traces of quality lurk in their filly's pedigree, Burke and Dance's achievement can be measured by the dams of the other fillies on the podium: September is out of four-time Group 1 winner Peeping Fawn, while Magic Lily is out of Oaks winner Dancing Rain, who was sold at the end of her career for 4,000,000gns. The Frankel foal Dancing Rain was carrying then remains unraced, but Magic Lily has quickly made up for that with an eight-length debut success and now a Group 1 placing.

If you are interested in this, you should read...

FIRST PUBLISHED 7:18PM, OCT 13 2017
The next dam was a typically doughty proposition: a St Paddy half-sister to a Prix du Cadran runner-up