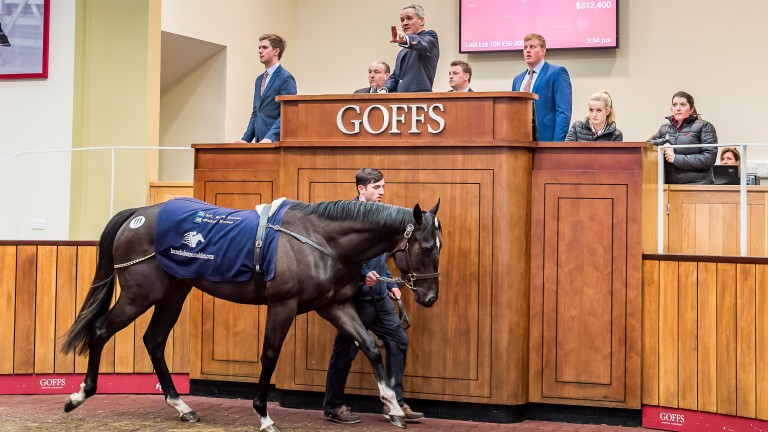 The European two-year-old sale season sprang into life in Doncaster on Tuesday with a day of solid - if somewhat selective - trade at the Goffs UK Breeze-Up Sale.

A total of 13 six-figure lots changed hands, one more than at last year's sale, contributing to an aggregate of £5,528,000 - a two per cent year-on-year increase.

The clearance rate finished at 76 per cent, with 138 of the 182 offered lots finding a buyer.

Curragh-based trained Michael O'Callaghan was among those to enjoy a productive afternoon in South Yorkshire, having signed for four two-year-olds at a total spend of £535,000. That quartet included the sale-topping son of Kyllachy offered by Con Marnane's Bansha House Stables for £220,000.

"He was the one horse we said we'd try not to go home without," said O'Callaghan, who was accompanied by his father - Michael snr - in whose colours the colt will run. "He vetted well, he did a fast time and he's one of the best-walking horses here. It's early days now but the dream is alive and hopefully he can live upto his price tag.

The colt, a €50,000 pinhook by Marnane, is a half-brother to the Listed-placed Weathervane and out of Westerly Air, a Gone West half-sister to the Grade 2-winning Midnight Line.

"He's a superstar," said a delighted Marnane, who sold Royal Ascot winner Prince Of Lir at this sale back in 2016.

"I thought he might make a good price but to what level I didn't know. He's done everything right, he's been a superstar throughout the winter. He's got a great mind and is a gorgeous colt. We're absolutely thrilled."

A short while later O'Callaghan entered the fray again when parting with £180,000 for a Kodiac colt out of a half-sister to Group 1-winning sprinter Maarek offered by Tally-Ho Stud.

"He did a good breeze and is a gorgeous individual," said the handler. "He has a good pedigree and hopefully he'll be a very good two-year-old. We've found a few horses that ticked all the boxes here and we've been lucky enough to get them." 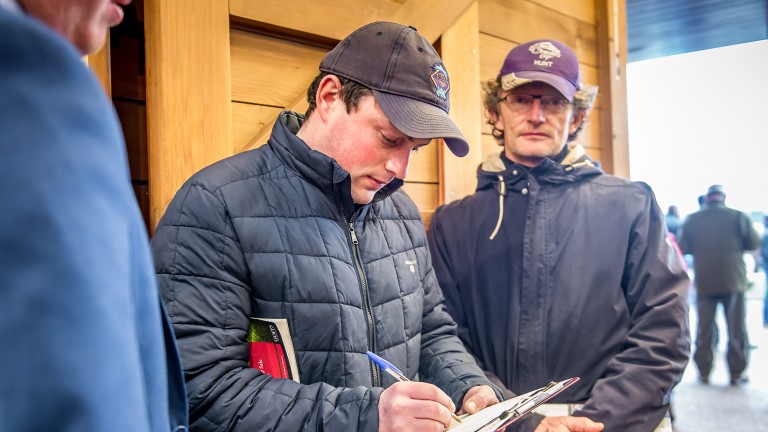 An early strike was landed by Blandford Bloodstock when Richard Brown got the better of David Redvers with a bid of £210,000 to secure a daughter of freshman sire Toronado offered by Mark Dwyer's Oaks Farm Stables.

"She was the one we wanted most," said Brown. "I think she's a filly that really wouldn't have enjoyed that ground yesterday. She's got a low, long stride but she went through it very well. It's not all about the clock but she blew that apart - her time was outstanding. It is, afterall, a breeze-up sale so you have to put a lot of emphasis on the breeze."

The filly hails from a family that has enjoyed a fruitful association with the breeze-ups, as her dam - Miss Mediator - is a half-sister to Tattersalls Craven Sale-toppers Great White Eagle and Qatar Racing's unbeaten three-year-old Kings Shield. 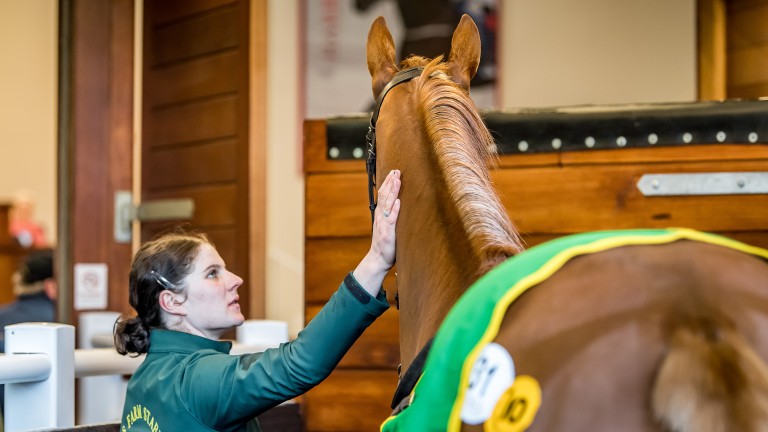 Lot 31, the Toronado filly bought by Blandford Bloodstock for £210,000, receives a reassuring pat before heading into the ring
Sarah Farnsworth/Goffs UK

"I've bought another Toronado filly as a yearling so I like the sire," continued Brown. "It was top whack - we were stretching - but you have to do that on the ones you really like and she was top of the class as far as we're concerned. She'll be trained by William Haggas."

The filly returned a handsome profit on her yearling price, having been signed for by breeze-up master Willie Browne at just £27,000 at the Goffs UK Premier Yearling Sale.

Matt Coleman has enjoyed some noteworthy results with the horses he has purchased for Peter Swann's Cool Silk Partnership, and was hoping he had found another fast one with the acquisition of a Showcasing colt for £200,0000 from the draft of Brown Island Stables.

"He's been bought for Peter Swann of the Cool Silk Partnership," said Coleman. "They bought Prince Of Lir here two years ago and had Sands Of Mali last year so they've had two good horses from the breeze-ups and hopefully this colt will be the third.

"He breezed very well and is from a great family. He did one of the fastest times, I loved his action and, for me, he was the best physical specimen in the sale. He did everything right for me - we'll find out if I'm right or wrong soon enough!

"Showcasing is doing well and I like the fact he's out of a Shamardal mare - I think he's a very good broodmare sire."

Coleman said no decision had been made as to who will train the Showcasing colt, with his client out of the country tending to an important family matter.

"Peter is in Vegas celebrating his son's 21st birthday - it's about 6am out there so I've been trying to keep him awake!" he said.

The colt, from the further family of Lockinge Stakes winner Fly To The Stars, Coronation Stakes winner Fallen For You and the exciting Glorious Journey, fetched just 38,000gns from Brown Island's Johnny Collins as a yearling, despite having been bought for 110,000gns by Richard Knight as a foal.

"In fairness to the horse he did everything right over the winter," said Collins, whose other breeze-up graduates include talents such as Mshawish and Syphax.

"He's got a brilliant temperament, he never turned a hair all the while he was here - every show was the same. And he developed well through the winter. He came here as a sharp-looking horse, he's quick and he breezed well yesterday."

Four sons of Kodiac fetched a four-figure sum during the session, including the colt out of Knapton Hill offered by Tally-Ho Stud who was signed for by Peter Harper at £160,000.

"He's for Sheikh Sultan Al Khalifa, who is here with me today," said Harper after signing the docket. "We haven't decided yet who will train him but he'll stay in this country. He did a very good breeze and he's a Kodiac from a very good consignor - they sell a lot of winners. So he's an excellent prospect."

A number of Tally-Ho's Doncaster draft were homebred by the operation. This colt, however, was picked up for €55,000 at last year's Tattersalls Ireland September Sale through Stroud Coleman. He is a half-brother to five winners and out of a winning daughter of Cherry Hinton Stakes winner Torgau.

Late in the piece Phoenix Thoroughbreds made its first acquisition in Europe in 2018 when landing a Pivotal colt offered by Hyde Park Stud for £140,000.

Newmarket trainer Ed Vaughan, who was part of the operation's inspection team at Ocala's March Sale, was entrusted with bidding duties, and said: "He's by a stallion that can get you a Group 1 horse and out of an Invincible Spirit mare that's stakes-placed.

"He did a nice breeze in a good time and looks a nice uncomplicated horse. I'm delighted to get him. He's for Phoenix Thoroughbreds. The ground wasn't the best during the breeze so we've kept a pretty small shortlist today."

Like Phoenix Thoroughbreds' exciting three-year-old Walk In The Sun, also a breeze-up graduate, this colt was bred by Godolphin. He is the first foal out of Bosra Sham Stakes third Hoodna, a daughter of Listed winner Heaven's Cause. 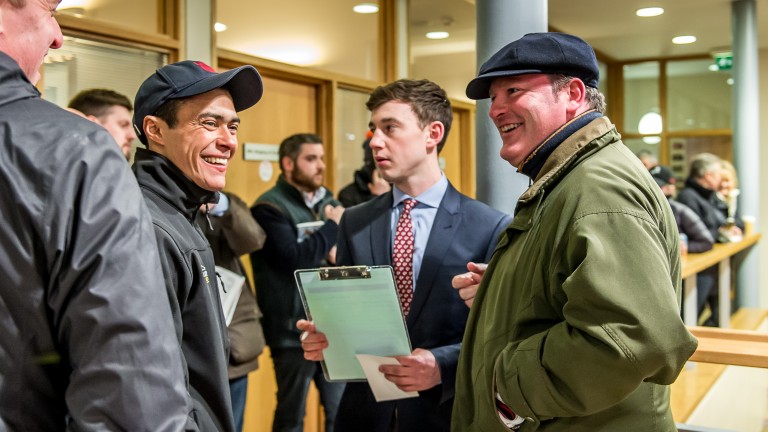 The transaction yielded a fantastic return for breeze-up jockey Robson Aguiar, who pinhooked the colt for just €26,000.

"I bought him at Fairyhouse," said Aguiar. "I think he's a very good horse, a good six- or seven-furlong horse.

"To me, he had everything - he had the pedigree and he's a good-looking horse, a compact, well-made type. I thought he had class when I saw him as a yearling and that is what he has proven to be - a classy colt."

It took just three lots before the session recorded its first six-figure transaction, as David Redvers went to £125,000 to secure The Bloodstock Connection's solitary offering, a son of Dark Angel, for £125,000.

"He probably suffered from early-lot syndrome so I consider that price good value," said Redvers. "We bought Raid off the vendor last year, and he's one of our nicest three-year-olds.

"He did a very quick breeze for a Dark Angel and you can't buy a yearling by Dark Angel, when you don't know if they can gallop, for £125,000, so to get one with a good pedigree that you know can gallop and is sound would seem sensible business.

"Obviously the racecourse will prove me right or wrong. I haven't got the first idea who'll train him until I discuss that with Sheikh Fahad."

The colt boasts one of the stronger pedigrees in the catalogue as a half-brother to Bengough Stakes winner Eastern Impact and Listed scorer Miss Katie Mae. He was offered on behalf of breeder Airlie Stud after failing to sell for 50,000gns as a yearling.

"He came here on behalf of an owner-breeder," said Johnny Hassett of The Bloodstock Connection. "He didn't sell as a yearling, so he came here. You'd have to be pleased with, though I think he was worth every penny. He's a Dark Angel with a good page and he's got the physical as well. And he's quick.

"I'm delighted with who bought him. They've bought two off me before and both won first time out."

At the close of trade Goffs UK's managing director Tony Williams said: "We marketed this sale extensively and travelled worldwide to attract an international buying bench. We achieved that and it was wonderful to welcome a number of new faces to the Breeze-Up Sale.

"Trade was strong throughout the day and the increase in this year's number of six-figure lots demonstrates the strength at the top of the market. The old adage 'breeze well, sell well' was clearly evident."

FIRST PUBLISHED 9:06PM, APR 10 2018
It's not all about the clock but she blew that apart - her time was outstanding