Zoe Vicarage reports from the one-day auction in Doncaster 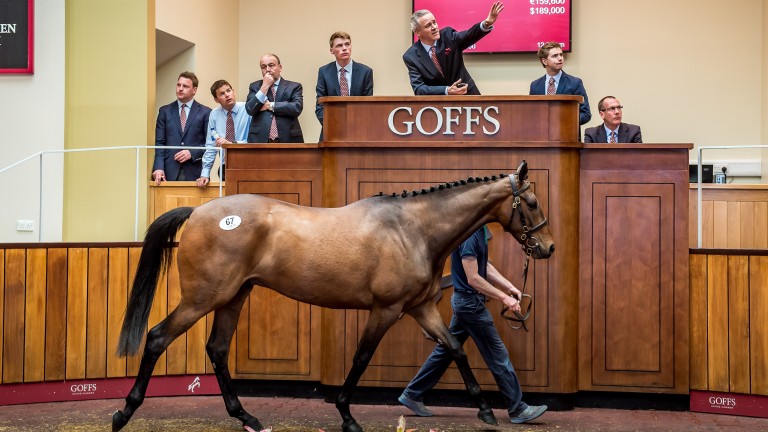 Fiona Magee's pinhooking prowess was in evidence again on Tuesday when her Kayf Tara gelding, offered by Ballincurrig House Stud, topped the Goffs UK Spring Store Sale when selling to Mags O'Toole and Gordon Elliott for £140,000.

The three-year-old, who strode into the ring with a long elegant walk, caught the eyes of several parties, with agents Tom Malone and Aiden Murphy trying to get in on the action in the early stages.

But as the bids crossed the six-figure threshold it was O'Toole who signalled the decisive bid to secure the gelding.

Sourced by Magee from a field as a foal, the son of Kayf Tara is out of the winning and Listed-placed hurdler Novacella, a daughter of Beyssac who is already the dam of the winning point-to-pointer Royal Rendezvous - a six-year-old son of King's Theatre sold by Magee and Virginia Considine to Highflyer Bloodstock for £130,000 at the Goffs UK Aintree Sale last year.

This is a strong National Hunt page as Novacella is a half-sister to Grade 1 Tolworth Hurdle winner Marcel and to Indecise, the dam of Grade 3 Betfred Becher Chase hero Vieux Lion Rouge and the Listed-winning Reflexion and Azza.

Michael Moore of Ballincurrig House Stud who consigned the gelding for Magee at Goffs UK said: "Fiona is a very shrewd lady and year in, year out she does very well with the stock that she sells.

"He's a lovely horse and there's no mystery as to why this horse made the money that he has. He had the pedigree, the movement and the wow factor."

Late in the day there was another good result for Ballincurrig House Stud as the Great Pretender gelding offered on behalf of Heathview Stables sold to Kevin Ross Bloodstock and trainer Ben Case for £75,000.

Out of the Beneficial mare High Benefit, the gelding is from the further family of Champion Hurdle-winning brothers Morley Street and Granville Again.

Case said: "He's been bought for Carolyn Kendrick, an owner of mine. He's quite a forward horse and should come to hand very soon. He's an athletic type as well."

John Dwan of Ballyreddin Stud in County Kilkenny travelled to the Spring Store Sale full of hope for his four-strong draft and he was duly rewarded on Tuesday when his Getaway gelding went the way of Kieran McManus for £88,000.

Sourced by Dwan for €31,000 at the Tattersalls Ireland November National Hunt Sale in 2016 as a yearling, he received a welcome boost ahead of the sale when his half-sister Whatzdjazz finished second in the Listed Mares' Handicap Hurdle at Cheltenham last month.

"I'm absolutely delighted with that result," said Dwan. "He's a really lovely horse and all the right people were on him and liked him. He was always a nice horse to do anything with at home and I wish the new owners the best of luck with him and hope he's a good racehorse for them.

"It's a very good family and the mare is a good breeder of racehorses so the update with Dan Skelton's horse Whatzdjazz was very timely for me."

It wasn't long until McManus was back in action on Tuesday as he went to £70,000 for Chapel Lane Bloodstock's Jeremy gelding. Out of the unraced Alflora mare Alfreeze, the gelding is from the family of Grade 2 winner Wee Robbie.

Despite missing out on Tuesday's top lot, Malone was active throughout the session, with his most expensive purchase coming in the shape of a £70,000 Al Namix gelding. 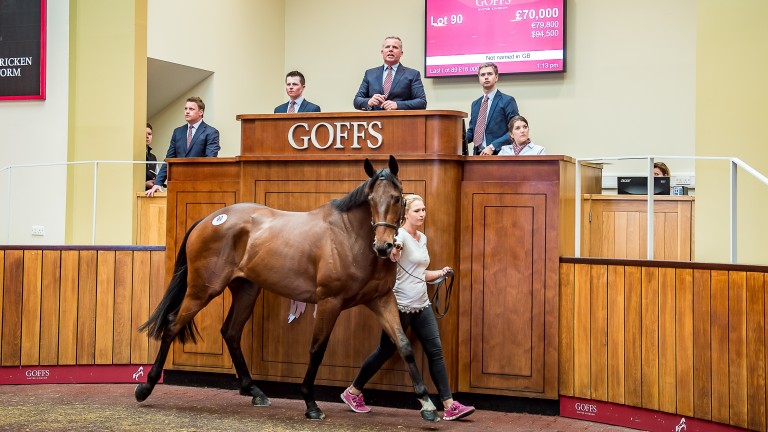 Malone said: "He's a lovely young horse who has been bought for Paul Nicholls. This fella had the pedigree, the quality and held obvious appeal. He's also by a sire that Paul has had plenty of success with."

Nine lots later Malone secured a Presenting filly offered by Bushertown for £68,000 that boasts a classy pedigree as she is from the family of Grade 1 hero Empire Of Dirt, Grade 3 scorer Panther Claw and Henry De Bromhead's exciting Grade 1-winning chaser Monalee.

Malone said: "She's a smashing filly, very gelding like. She's been bought on spec by Paul. She has a very good pedigree and has come from a very good home."

Goffs UK managing director Tony Williams said: "To sell the highest-priced store in over a decade is testament to the enduring appeal of the Doncaster Spring Sale. Last year we celebrated a record Store Sale, with the average and median growing by 22 per cent and 15 per cent respectively, so to grow that median again demonstrates that the sale continues to progress and evolve.

"We had another wonderful attendance with a huge number of owners, trainers and agents onsite and the demand for hoses was strong at all levels, particularly in the middle mark, which ensured we finished with a high clearance rate."

The Spring Sale continues with the Horses in Training and point-to-point auction which begins a two-day run at 11am on Wednesday.

FIRST PUBLISHED 8:37PM, MAY 22 2018
There's no mystery as to why this horse made the money that he has. He had the pedigree, the movement and the wow factor.

'We might see an even better performance' - Zaaki posts immensely promising win Connections of Sportsman's sale graduates given new €100,000 race to target Kingsgate Native's half-brother poised to make debut for O'Brien and Coolmore No Nay Never juvenile colts ready to rumble for Ballydoyle at Naas 'Apple of Cox's eye' Get Ahead set for debut at Ascot for Hot to Trot syndicate Launch of new online learning platform for the thoroughbred breeding sector