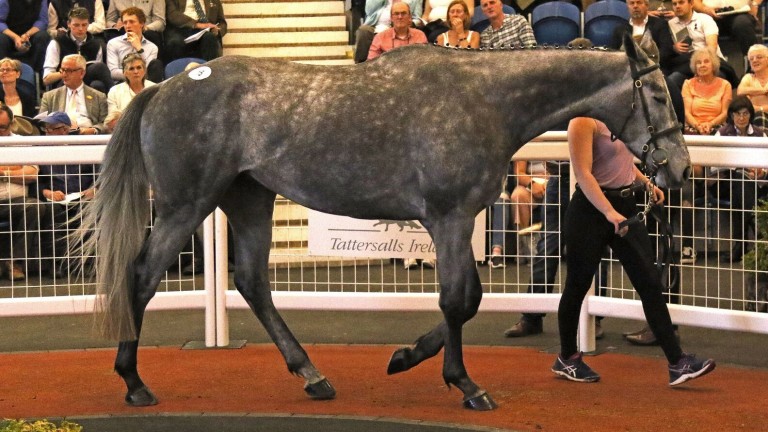 The Tattersalls Ireland Cheltenham April Sale took place on a scorching Thursday with the fourth race of the inaugural all-mares card, a 3m2f handicap chase, forced to be abandoned after the mercury hit 25C.

It was the wildcard entry Thatsy who brought the heat during yesterday evening's sale, as the Donnchadh Doyle-consigned grey went the way of Aidan O'Ryan and Gordon Elliott for £130,000.

The four-year-old was the sole lot catalogued by his sire Martaline, and jumps breeders were given yet another reminder of the talents of the Haras de Montaigu resident after he supplied a brace of Grade 1 winners - We Have A Dream and Terrefort - at the Aintree festival.

"He's a nice big horse with good form and will be one to look forward to next winter," said Elliott, who notched his second winner of the Grand National on Saturday.

Tiger Roll, a son of Authorized, was purchased from Nigel Hawke for £80,000 at Cheltenham in December 2013, after he had rocked up in a three-year-old hurdle at Market Rasen.

"It's been a lucky place for us," noted the trainer.

The second most expensive lot, Cobbler's Way, was offered by Colin Bowe's Milestone Stables on behalf of his farrier David O'Connell and his brother, with Mags O'Toole and Henry de Bromhead snapping up the aptly named four-year-old Oscar gelding for £120,000.

Cobbler's Way, who finished second on his Dromahane debut, is one of six foals out of the unraced Beeper's Leader, who shares her granddam with Foxchapel King, whose notable successes over fences include the Ericsson Chase, Munster National and Troytown Chase.

"His point at Dromahane was run on heavy ground, and he managed to stay on well," said the vendor. "He will make a nice, future, staying horse." 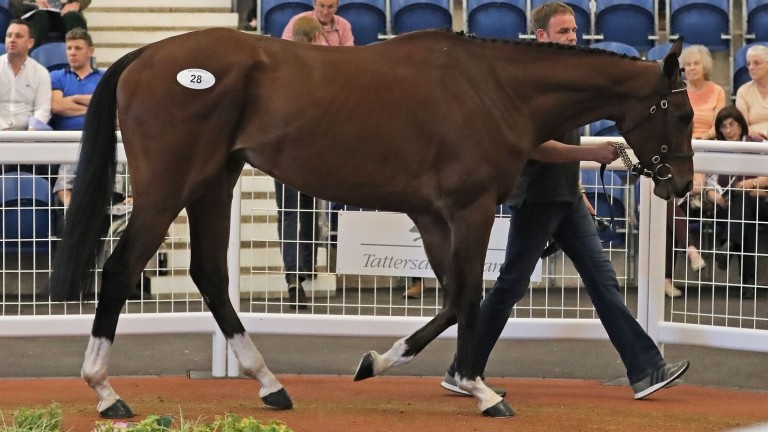 Thursday's card at Cheltenham was unique in that it was comprised of races for fillies and mares only and Anthony Honeyball, the trainer whose Ms Parfois was runner-up to Terrefort in the Mildmay Novices' Chase, was stood alongside agent Ryan Mahon when he went to £82,000 to secure four-year-old Fame And Glory filly Deja Vue, a four-length winner at Inch last month.

Deja Vue is by Fame And Glory out of a Presenting mare, whose other daughters have been responsible for the likes of Might Bite, Presenting Percy and Rathvinden, who Ms Parfois was second to in the 4m National Hunt Chase.

Meep Meep also looked like she could sell well having finished fourth to Getaway Katie Mai in the Grade 2 bumper at Aintree, however Tom Lacey's charge went unsold when auctioneer Alastair Pim brought his gavel down at £95,000.

From one Aintree winner to another

Tom Malone returned to the source of his Grand National-winning purchase One For Arthur, when snapping up the five-year-old Shantou gelding Redzor, with the Ballyragget maiden winner sold for £80,000 by Liam Kenny's Ballydaragh Stables.

Malone picked up One For Arthur after the son of Milan went under the hammer at the same Cheltenham sale - by a striking coincidence - as this year's winner.

Speaking about Redzor, who is out of an unraced half-sister to RSA Insurance Novices' Chase winner One Knight, Malone said: "He's a lovely horse a good-looking bay and I was there when he was third at Ballinaboola. He's a likeable horse with a good pedigree and he'll go into training with Dan Skelton for owner Bryan Drew."

The same amount was realised for Modern Warfair and wildcard entry Jackson Hill, both four-year-old geldings.

"He has one awesome CV for an eight-year-old," said Richard Pugh, director of horses in training sales, of Tiger Roll. "To have three Cheltenham Festival wins and a Grand National victory - I just hope he gets the credit he deserves. He really is quite awesome and the kind of horse we are trying to sell. He made £80,000, which is within reach for many of our clients.

"It was great to see Finian's Oscar back. I can't remember seeing a horse go from winning a point-to-point to a Grade 1 as quickly, and then to come back the following season and win another. He's a special talent."

Eight fewer lots were offered than last year, with 23 of the 36 horses switching hands. And though the aggregate fell considerably from £3.001 million to £1.204 million, vendors will take heart at the fact the median - sometimes a more reflective market indicator than the average - only dipped slightly from £50,000 to £47,000.

FIRST PUBLISHED 1:23AM, APR 23 2018
Vendors will take heart at the fact the median - sometimes a more reflective market indicator than the average - only dipped slightly to £47,000