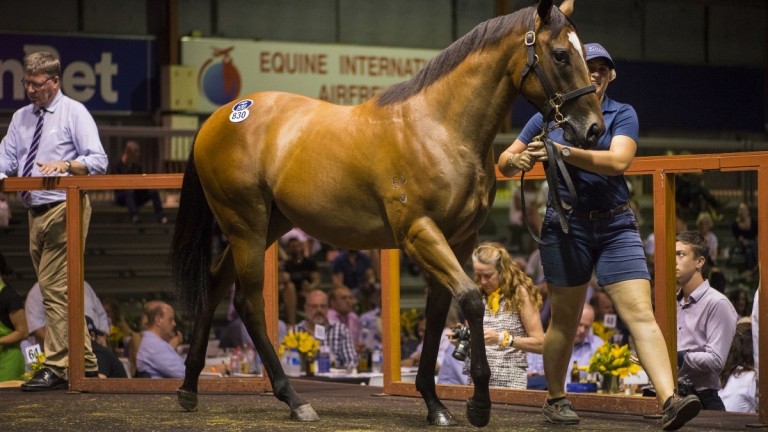 The Snitzel filly out of Intimate Moment snapped up for A$1.1 million by Mark Newnham on day four of the Magic Millions
Magic Millions
1 of 1
By Lydia Symonds and Tim Rowe of ANZ Bloodstock News UPDATED 6:56PM, JAN 13 2018

A filly by champion sire Snitzel made A$1.1m (£633,985/€713,290) during yesterday's session of a record-breaking book one of the Magic Millions Gold Coast Yearling Sale to top the final day of the highest-grossing thoroughbred auction ever conducted in the southern hemisphere.

One of nine yearlings to fetch a seven-figure sum at the Gold Coast Sale, the filly was purchased by Sydney-based trainer Mark Newnham.

Turnover surpassed the previous high that was set at the Inglis Australian Easter Yearling Sale in 2008. The median price of A$170,000 was also a new record, while the clearance rate reached 89 per cent, with 684 lots changing hands.

Those record results were achieved despite the absence of key buyers such as Shadwell, the Hong Kong Jockey Club and US-based agent John Moynihan.

Outgoing Magic Millions managing director Vin Cox, who joins Godolphin later this month, said the support of the vendors and a strong buying bench had led to the results.

"It started with our breeders and vendors who gave us an extremely high-quality draft and, together with our continued racetrack success over many years, that gave us the ability to promote the sale far and wide and attract a very strong buying bench," Cox said.

"Both vendor and buyer have confidence in what we are doing and what we are producing and as a result it created a perfect storm."

The top lot was consigned by Widden Stud, and is the first foal out of Group 3 Epona Stakes winner Intimate Moment, by Dubawi.

A winner of four races, Intimate Moment is a half-sister to Group 3 winner Upham and Listed winners Bonnie Mac and Gold Rum.
Newnham set a new personal high with the A$1.1m purchase, but said he had been determined to get the Snitzel filly. .

"She was the one we've been waiting for for the last three days, so it's nice that we were able to get her," he said.

"We thought she was going to be pretty dear, and we did think she was the best one here, so you've got to pay for them. It's the first time I've gone past A$500,000, so that just shows how much we liked her. Hopefully she can repay us."

Newnham said the filly's pedigree was matched by her physique.
"She looks a natural and with a really strong pedigree behind her, you would nearly give up if she couldn't run," the Sydney-based trainer said.

"She's a good strong-bodied filly who is bred to run early and she reminds me a bit of Sweet Idea who was able to do it at two, three and four years old, and hopefully this filly can do the same."

Sweet Idea, who is also by Snitzel, won the Group 1 Galaxy at Rosehill, while her yearling sister was sold for A$1.8 million by Arrowfield Stud on Friday.

"We knew we had an elite filly who was much admired but you just hope that everything falls into place and the buyers haven't used up their budget and bought something else, so we were a bit nervous being so late in the sale," Widden Stud proprietor Antony Thompson told ANZ Bloodstock News.

"I knew Mark loved her and was desperate to buy her, but you can never know how far they can go, so we were stunned with that result."

Thompson said it was over lunch when he and some partners decided to buy into the former Ron Quinton-trained Intimate Moment.

"The mare was trained by Ron Quinton and we went to lunch with one of the owners, Alan Stevenson, in Melbourne before the Derby down there and he said there might have been a share for sale," he said. "A few of the boys at the lunch and myself bought as much of her as we could and Alan stayed in, so it was a pretty good lunch as it turned out!"

FIRST PUBLISHED 4:48PM, JAN 13 2018
Both vendor and buyer have confidence in what we are doing and what we are producing and as a result it created a perfect storm