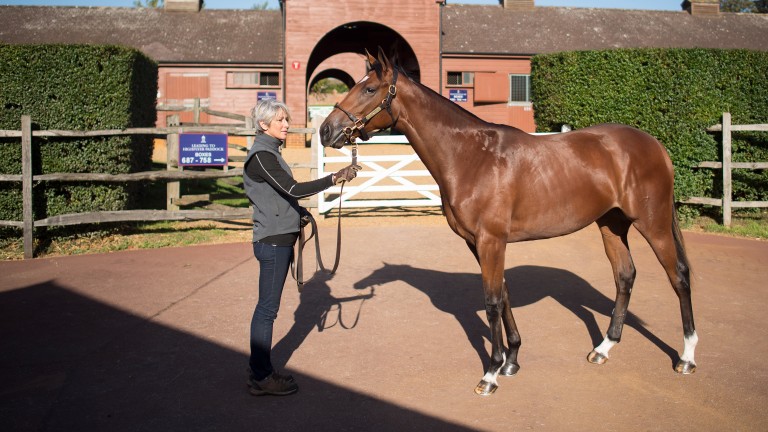 Gloam being shown by her groom Rachel Andre at Tattersalls on Tuesday
Edward Whitaker
1 of 1
UPDATED 1:50PM, OCT 6 2017

In a piece of theatre to rival anything staged in the West End, Sheikh Mohammed’s Godolphin buying team stunned the Tattersalls sale ring on Thursday as they outbid rivals Coolmore at 4,000,000gns for a daughter of champion sire Galileo and Breeders' Cup winner Dank during the concluding session of Book 1 of the October Yearling Sale.

From the moment the filly strode gracefully between the famous acorns, bids began to fly frenetically around the auditorium, with Kerri Radcliffe and David Redvers among those responsible for forcing her price past 2,000,000gns. But once Radcliffe saw off Redvers, the ultimate protagonists took to the stage: John Gosden - concealed in the entrance with colleagues Anthony Stroud and David Loder - and Coolmore's MV Magnier.

No quarter was given as a rapid series of bids saw the price quickly climb to 3,000,000gns. Here the pace slow markedly as Magnier, Paul Shanahan and Michael Tabor began to deliberate each move. However, their every 100,000gns volley was met with a resolute nod of the head from Gosden until Edmond Mahony brought his gavel down at 4,000,000gns.

"You very rarely have a filly of this quality come onto the market," said Gosden. "She's by a great stallion and out of a phenomenal racemare. She's an outstanding physical example. For her racing future and her breeding future she's a very exciting prospect - that's what we prefer to concentrate on."

Gosden went on to explain some of the thinking behind the commitment of such an eye-watering sum, which equates to £4.2 million.

"You must always think that the stud needs to be regenerated with new bloodlines," he said. "That's very important, for the racing programme and the breeding programme equally. If we see nice fillies by any stallion we'll be very interested, just as we would with a nice colt. It just so happens that this filly, and the filly sold by Ballylinch at Goffs, are outstanding physical specimens with great pedigrees."

When asked if he knew who would be training the 4,000,000gns filly, already named Gloam, Gosden said: "Nothing of that nature has been decided at all. That will be done some time in the autumn."

The transaction also provided Norris Bloodstock, who offered the filly on behalf of breeder James Wigan - in whose silks Dank landed the 2013 Beverly D Stakes and the Breeders' Cup Filly and Mare Turf - with a second successive Book 1 top lot, having also sold Glorious Journey to Godolphin for 2,600,000gns 12 months earlier.

"I could feel my heart going the whole way through! It's quite indescribable," said vendor Jenny Norris. She's always oozed class and has taken everything in her stride. It's a real honour for the Wigans to have asked us to prep her - I never thought we'd top last year."

The filly becomes second most expensive yearling filly to be sold at auction, giving best only to Al Naamah, who fetched 5,000,000gns from Al Shaqab during the 2013 renewal of Book 1.

The sale-topping transaction contributed to Godolphin's Book 1 spend of 15,930,000gns on 27 yearlings, of which 5,775,000gns was accounted for by the four Galileo yearlings, three fillies and one colt, acquired by Sheikh Mohammed's operation.

"The statistics for this week's sale are pretty astounding," said Tattersalls chairman Edmond Mahony. "Obviously the individual highlight was the 4,000,000gns Galileo filly out of Dank. She was not only the highest priced auction yearling sold anywhere in the world this year, but also the second highest priced yearling filly ever sold at public auction.

"The sale turnover of more than 100 million guineas is a record for the sixth consecutive year, more than double the level of only seven year's ago, and the average and median have also soared to unprecedented heights. In short, the record books have been completely rewritten."

All Go for Cassandra's filly

Coolmore's MV Magnier may have missed out on the sale-topping Galileo filly, but he had enjoyed better fortune earlier in the session when he secured the Invincible Spirit filly out of King's Stand Stakes winner Cassandra Go, offered by Ballyhimikin Stud, for 1,600,000gns.

"This family is so current, it's frightening," announced John O'Kelly as the filly entered the ring, and with her page having received a Group 1 update as recently as Sunday, it's easy to see what he meant.

The athletic filly is a half-sister to Halfway To Heaven, the Irish 1,000 Guineas winner who has hit the headlines in recent times as the dam of Rhododendron - winner of the Prix de l'Opera at Chantilly last week - and the Group 2-winning two-year-old Magical. 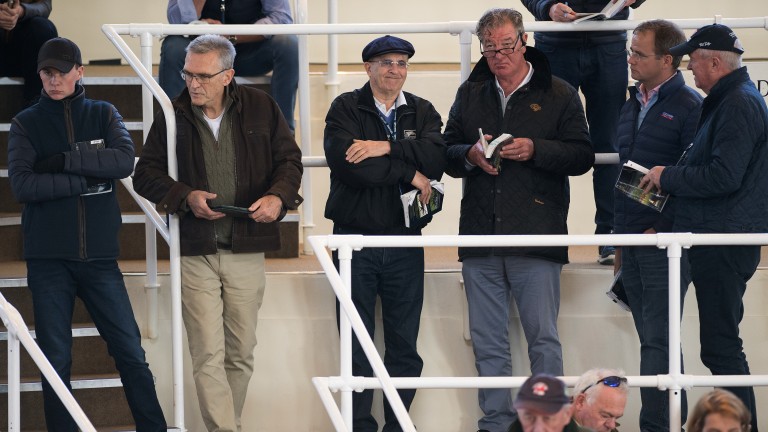 Eyeing the next big buy: team Coolmore on the lookout for new talent
Edward Whitaker / racingpost.com/photos
The daughter of Invincible Spirit is also a half-sister to Group 3 winner Theann, who foaled dual Grade 1 winner Photo Call, and a sister to the smart Tickled Pink.

Stewart retained ownership of Cassandra Go's two-year-old Iffraaj colt, who is named Scooter and is in training with Roger Charlton. The dam is in foal to Gleneagles.

Magnier's name appeared on the docket of 11 lots over the three days - including eight bought in partnership with the Mayfair Speculators - for a total spend of 9,325,000gns. He also secured the final lot through the ring, the Galileo brother to Highland Reel and Idaho, for 240,000gns from the draft of Camas Park Stud.

Sheikh Hamdan's Shadwell operation made two notable additions to its string during Thursday's session, having snapped up a pair of sublimely bred Dubawi colts. First came the son of five-time Group 1 winner Attraction at 1,350,000gns, whose two-year-old Frankel half-brother Elarqam carried Shadwell's silks to an impressive victory in the Group 3 Tattersalls Stakes on his most recent start.

That was followed later in the act by a 1,500,000gns spend on one of the catalogue's most highly anticipated lots, the colt out of Arc heroine Danedream.

"Obviously he's by one of the world's top stallions," said Gold. "And he's out of a remarkable racemare. I saw him at the farm three weeks ago and liked him then. And I thought he behaved immaculately all the way through here - he has a very classy look about him."

The colt, a typical model for the sire, was bred by Shadai Farm's Teruya Yoshida and sold by Newsells Park Stud. He is the third foal out of his dam, who also has a three-year-old Frankel filly named Nothing But Dreams, and a two-year-old colt by the same sire - Solid Dream - on the ground.

The son of Dubawi became the first progeny of an Arc winner to be sold at public auction since Urban Sea's daughter My Typhoon fetched 1,800,000gns back in 2002.

Phoenix Thoroughbreds agent Kerri Radcliffe has made a sizeable impact at sales on both sides of the Atlantic this season, and ensured she was not walking away from Book 1 empty handed having made a pair of big-money acquisitions during Thursday's session.

First she struck at 600,000gns for Yeomanstown Stud's Lope De Vega colt out of Group 3 winner Dolled Up. The colt is a half-brother to promising French juvenile Fou Rire, and rewarded a bold pinhook by his vendor, who spent 230,000gns on the colt as a foal.

Just a few lots later Radcliffe re-entered the fray to part with 1,000,000gns for the Sea The Stars colt out of Elegant Shadow offered by Deerpark Stud.

"He's always been a special colt," said the stud's Peter Fagan. "He's been a star from day one. Dad [John Fagan] and Ciara McEvoy have done an incredible job with him on the farm. And thanks go to Suzanne Roberts for finding the mare for us in Germany - we bought her privately off the track. He vetted extremely well but we never thought he would make quite that."

The colt's great-granddam is the champion German filly Elle Danzig.

Chris McGrath on the background to a 4,000,000gns shootout

FIRST PUBLISHED 7:31PM, OCT 5 2017
You very rarely have a filly of this quality come onto the market. She's by a great stallion and out of a phenomenal racemare