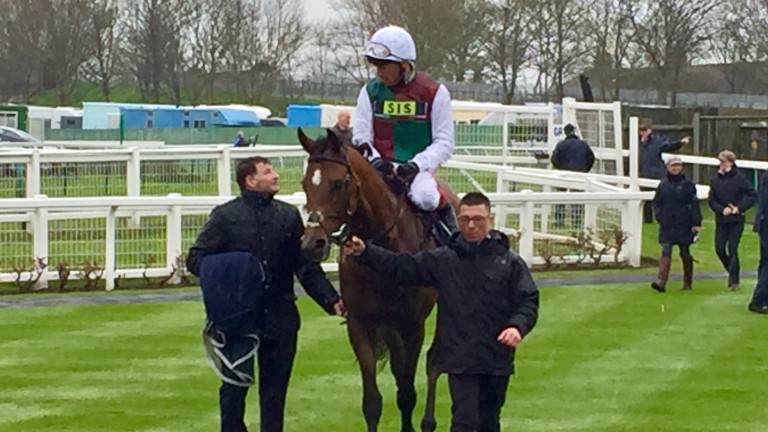 As diary clashes go, the one Tanya Gunther and her father John could have to work their way around on Saturday falls firmly in the 'worse problems to have' category.

The pair, who between them steer the ship at Kentucky's Glennwood Farm, could see their colours carried in the Qipco 2,000 Guineas at Newmarket by the promising and undefeated Without Parole, who advertised his Classic credentials with a six-length victory at Yarmouth last Tuesday.

For most breeders, that would be exciting enough but a few hours later another pair of talented colts bred by the Gunthers, Justify and Vino Rosso, will line up some 4,000 miles across the Atlantic Ocean in what appears to be a high-class renewal of the Kentucky Derby.

"My dad and I are considering whether to split forces and have him go to the Guineas while I stay here for the Derby. It would be a very nice problem to have."

A nice problem indeed and in Without Parole, the father-daughter team have more than a nice horse on their hands, a fact made all the more special given the meticulous work that went into producing him.

He may be trained in Newmarket by John Gosden but Without Parole is Glennwood through and through.

His story extends back to 2003, when John Gunther picked up the Storm Bird mare Marozia for $50,000. She would go on to produce the dual Grade 1 winner Stay Thirsty as well as, among others, Without You Babe.

The latter, having already produced Tamarkuz, would ultimately find herself shipped to Europe as John sought to tap into some of the continent's strongest turf sire lines and her meeting with the champion Frankel produced Without Parole.

"We owned Marozia, she was the foundation mare for us many years ago and this is her grandson, so it's extra special when you've invested in a family throughout the generations," says Tanya.

"We had Without You Babe on the farm here at Glennwood and shipped her to Europe. My dad felt the sires over there were stronger at that top end and he wanted to give it a whirl. He loves the European stallions and loves turf breeding. He absolutely loves Frankel too and was desperate to breed to him."

One such talented three-year-old colt would be more than enough but to be represented as well by Justify and Vino Rosso, albeit no longer in the Gunthers' ownership, is the stuff most breeders outside of Coolmore would scarcely dare to dream about.

Asked to share the secret, Tanya laughs and adds: "I wish I knew!

"Then you have to take care of them. I stress over keeping them alive, which is not always easy when they are younger, I spend a lot of time thinking about that kind of stuff. Obviously, Without Parole is based in England, so we had other people doing that for us."

The hard work has brought the team to this stage, the start of what could be a week to end all weeks and at this early point, for all the nervous fretting, there remains the wonderful optimism that everybody who has ever been associated with a racehorse has felt in their stomach at one time or another.

"We are all very excited," says Tanya. "That was a very impressive performance [at Yarmouth], the way he won he reminded me of his dad.

"Not to be too bullish but just the way he finished that race and the look of him, it all just reminded me a little bit."

If Without Parole can produce anything even approaching what his father did on the Rowley Mile back in 2011, this could turn out to be the most special week of them all.

FIRST PUBLISHED 6:46PM, APR 29 2018
My dad and I are considering whether to have him go to the Guineas while I stay here for the Derby. It would be a very nice problem to have