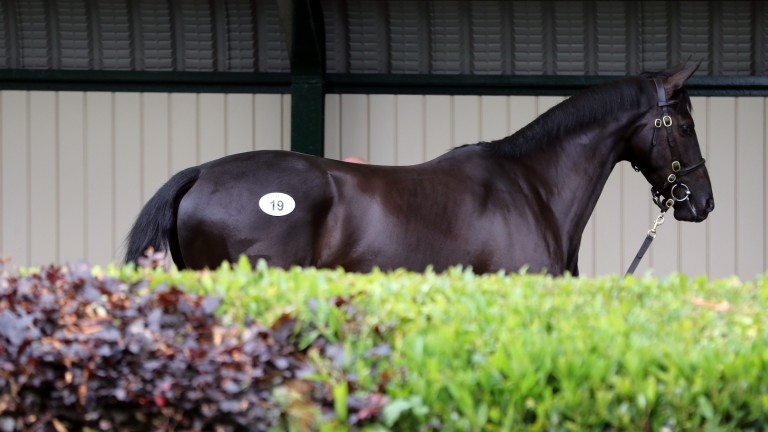 Three of those nine were signed for by Joseph O'Brien, headed by a €160,000 son of the Grange Stud resident Getaway. That figure represented a ten-fold increase on the original price paid by Brown Island Stables, who secured him as a foal for just €16,000.

"He's a lovely, big scopey horse from a very nice family,” said O’Brien. “We also have a nice Getaway at home that ran well in his bumper at Fairyhouse last year."

The gelding is out of the unraced Oscar mare Tierneys Choice, a half-sister to the Grade 3-winning chaser On The Other Hand and the Welsh National second Benvolio, whose further family includes Flying Angel, winner of the Grade 1 Manifesto Novices' Chase in April.

O'Brien also went to €150,000 for the AQPS-bred Easywork D'Olivate. The three-year-old son of Network, the sire best known for producing the inimitable Sprinter Sacre, was bought from Norman Williamson's Oak Tree Farm.

"He's a lovely, big horse, an easy mover and has loads of scope," said O'Brien of the three-year-old, who had clearly progressed plenty physically since being bought by Mags O'Toole as a juvenile for €67,000.

A delighted Williamson added: "He's a lovely horse and was lucky for us. He's a great individual and will make a big chasing type. He was bought at the Arqana Summer Sale and has developed very well since. I hope he's lucky for Joseph."

There is nothing like a winner to help focus a buyer's attention, and plenty will have been aware that it was at the 2016 renewal of this sale that that Williamson's operation sold Vision Des Flos who, having cost Paurick O'Connor €25,000, went on to land the valuable Land Rover bumper before going on to top the Goffs Punchestown Sale at €270,000 when going the way of Tom Malone.

O'Brien also picked up a Fame And Glory gelding out of the winning Kahyasi mare Larkbarrow, a half-sister to the Grade 2-winning chaser Frisco Depot, for €100,000. That sum was more than three times the €28,000 that Rathmore Stud had paid for him as a foal from Little Lodge Farm. 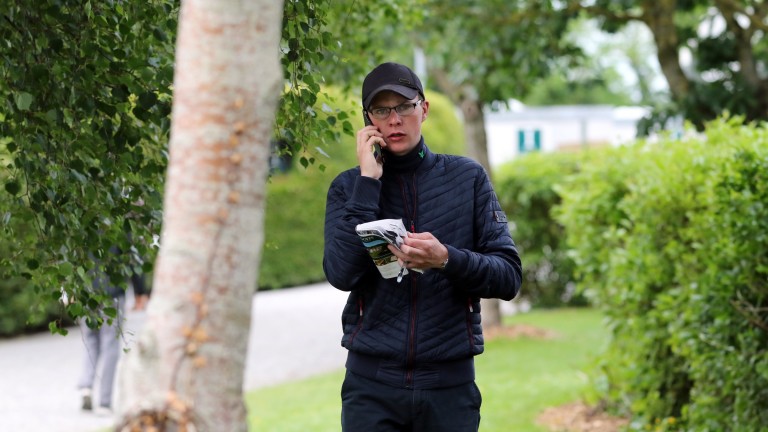 The progeny of Getaway proved very much in vogue, with three of the top-ten lots being by the sire. Mouse Morris had the winning bid of €120,000 for a chestnut gelding out of the winning Old Vic mare Saintly Lady, offered by Lakefield Farm, who sold this year's Gold Cup hero Sizing John privately.

It proved a remarkable pinhook for Lakefield’s John Bleahen, who bought the gelding for €14,000 as a yearling from Thistledown Stud, acting as agent.

Morris said: "He's a lovely, attractive, racey type, and has a lot going for him. He's been bought off a very good farm. His sire has also done very well with his early runners."

Gordon Elliott - who came agonisingly close to being crowned Irish champion trainer last season - was another major player to strike for the progeny of Getaway, having landed a winning bid of €100,000 for a gelding out of an unplaced half-sister to five black-type performers, including the 1999 Irish Grand National winner Glebe Lad.

"He's a half-brother to [Miracle In Medinah] that I train - a very nice horse that won a bumper at Fairyhouse in March," said Elliott. "He's a nice horse and it is a real nice family. He was bought for a client of the yard."

The gelding, offered by Sladoo Farm, had been bought back by Ridgeway Paddocks for €14,000 as a foal.

Elliott also struck for one of the most anticipated lots of the day, the first foal - a son of Robin Des Champs - out of the high-class Voler La Vedette, at €95,000. The King's Theatre mare twice took the scalp of Mourad during her career, including when landing the 2011 Hatton's Grace Hurdle.

The mare also placed in five hurdle races at the highest level, most notably when second to Big Buck's in the 2012 World Hurdle.

"We've all seen what the sire can do. The mare was top-class and this gelding is one for the future," said Elliott.

Vendor Rathbarry Stud more than doubled its initial outlay, having purchased the gelding as a foal for €40,000. 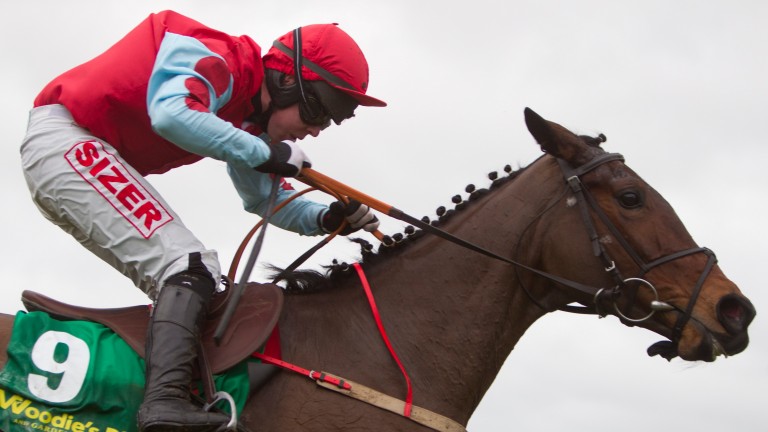 Rathbarry Stud saw four lots sold for a total of €246,000 and an average of €61,500, with Bobby O'Ryan going to €100,000 to secure the Presenting gelding out of Accordingtoeileen consigned by the County Cork operation.

Rathbarry purchased the gelding from Mary Curran from Yew Tree Stables for €19,000 as a foal, so Tuesday's sale represented more than a five-fold increase.

"He's a very good moving horse and is by a sire who's done it all. He was bought for a client who will keep him in Ireland," noted O'Ryan.

Tom Malone left it late in the day before going to €125,000 for a Kapgarde gelding out of the three-time winner Hillflower.

Despite having a page with only one black-type performer under the first four dams, Malone - stood with Paul Nicholls - was happy with his purchase and said: "He's a lovely horse, and we've been waiting for him all day. I saw him on Sunday and he was in my top three. I missed out on the other two, but he was my preference.

"He'll go into training with Paul Nicholls for owner Colm Donlon," added Malone. Donlon is a part-owner of Caid Du Berlais, winner of the 2014 Paddy Power Handicap Chase at Cheltenham.

Dai Walters was also active, and went to €110,000 to secure an Oscar gelding out of an unraced sister to Whisper, who carried the owner's familiar silks to success in back-to-back runnings of the Grade 1 Liverpool Hurdle, and also finished second in the RSA Novices' Chase at this year's Cheltenham Festival.

"It's been a lucky family for me," said Walters, who indicated the gelding was likely to go into training with Nicky Henderson.

Walters also paid €85,000 for a Shantou gelding out of an unraced half-sister to the Listed-winning and Grade 1-placed Toubab, who he suggested would remain in Ireland to be trained by Elliott. 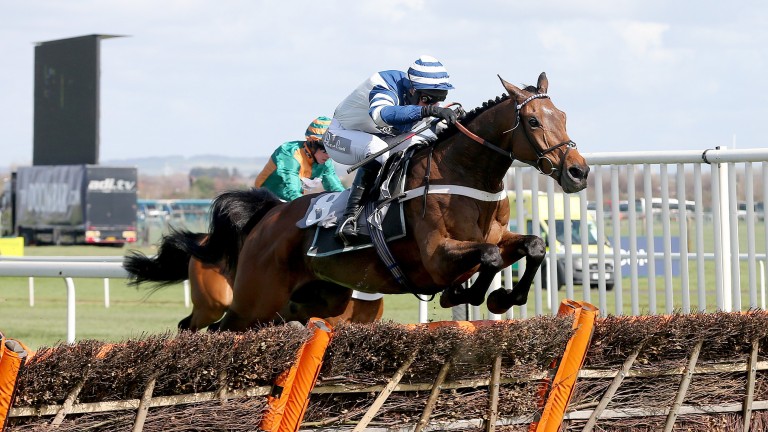 Highflyer Bloodstock's Anthony Bromley, Tessa Greatrex and David Minton were among those on the hunt for future jumps talent, and it was Greatrex who secured the striking son of Great Pretender for €80,000 from her position in the bidders' area. The three-year-old is a half-brother to The Absent Mare, a three-time winner on the all-weather for trainer Robin Dickin and a winner over hurdles for Gordon Elliott.

"He's a proper athlete and really showed himself well. He'll go into training with Warren [Greatrex]," said the agent, who was responsible for the purchase of this year's Neptune Novices' Hurdle scorer Willoughby Court, for €48,000 from Pine Tree Stud, at this sale in 2014.

The recent success of Land Rover Sale graduates has not escaped the notice of some of Britain's leading trainers, with the likes of Paul Nicholls, Colin Tizzard and Nigel Twiston-Davies all present at the sale.

"We're here looking for National Hunt winners. I was here once before, about ten years ago, when I bought six cheaper lots for a syndicate we had at the time," said Tizzard.

"People have been saying the horses have been getting better at this sale, and it looks like they have," added the trainer, who went to €60,000 to secure Castlefarm Stud's Presenting gelding out of the Grade 3-winning hurdler and Punchestown Champion Bumper second Oilily.

"He's a nice-looking horse and we will be hoping to sell him on," said Tizzard, who also paid €41,000 for a Flemensfirth gelding from Roxborough Stud out of an unraced half-sister to Finger Onthe Pulse.

FIRST PUBLISHED 8:35PM, JUN 13 2017
People have been saying the horses have been getting better at this sale, and it looks like they have