James Harron goes to A$1.9 million for I Am Invincible colt 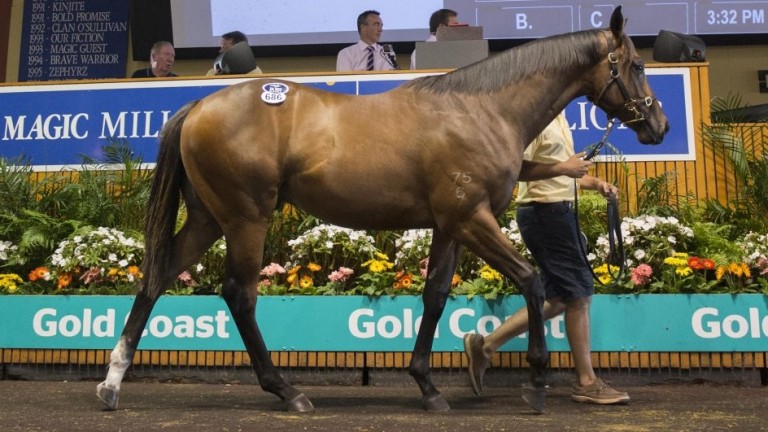 The demand for progeny of I Am Invincible, the 13-year-old son of Invincible Spirit, was again on show on day three of the Magic Millions Gold Coast Yearling Sale, with two colts reaching seven figures during a remarkable session that saw a total of five lots fetch A$1 million (£577,000/€649,000) or more.

The pair of seven-figure colts by the Yarraman Park-based stallion joined the A$2m lot by the sire sold on Thursday, and played their part in making Magic Millions history, with Friday's session the first to see five yearlings hit the A$1m mark at the Gold Coast complex.

The A$1.9m top lot on day three formed part of the Segenhoe Stud draft, and the operation’s general manager Peter O’Brien told ANZ Bloodstock News that the colt was in the top five yearlings he has ever dealt with.

"It was certainly a day to sell an I Am Invincible, but in fairness to him he was just a beautiful yearling, all quality, which is consistent with his sire, who just throws a beautiful looking horse," said O'Brien.

"Peter Horwitz, who's a great friend of mine, bred him and I know he'd like to thank Steve Brem, who bought the mare for him, and Darren Corbett, our yearling manager, who has just done a great job with him.

"I've sold horses all my life and he would be in my top five as a type. When James Harron buys a horse, you know they are good looking."

Catalogued as Lot 686, the colt is out of the three-time winning Redoute's Choice mare Electric Dreams, making him a half-brother to three winners including the Group 3 winner Broadband.

Harron admitted that he had been nervous heading into Friday's sale and was relieved to be heading home with the colt.

"He was the best I Am Invincible colt, in my opinion, that I have seen," Harron said. "He is a very special colt and very precocious looking. Segenhoe did a great job and he paraded outstandingly throughout the week.

"He has been keeping me awake at night waiting for him to come up, so it is a big relief to get him. He has got everything I look for in a horse and the stallion is flying."

Harron marvelled at what I Am Invincible has been able to achieve at stud from six crops of racing age after starting out at a fee of A$11,000 (including GST).

"He has done it the hard way. Yarraman Park has done a terrific job in getting the right mares to him and they have been in the right stables," he said.

"To do it from A$11,000 shows the quality and potency of the stallion. We are starting to see the ones from the better mares now and everyone is asking 'what is the limit for this stallion?'"

Widdup to train A$1.4m I Am Invincible colt

Earlier in the day, another son of I Am Invincible broke through the seven-figure barrier when Damion Flower of Jadeskye Racing went to A$1.45m to secure the colt from the Vinery Stud draft.

The colt, who was purchased in partnership with BK Racing, will return to Flower's Platinum Park and be prepared by trainer Brad Widdup, who set up on his own last year after a long stint as an assistant with Woodlands and Godolphin at Crown Lodge in south-west Sydney.

"We went looking for an I Am Invincible. I am impressed by his nature and he is out of a really good Commands mare," Flower said.

"He was taken out of his box a lot of times. His mannerisms were excellent and he is a really athletic horse.”

The colt, who was offered as Lot 624, is the first foal out of the Thousand Guineas winner Commanding Jewel.

The mare is out of the dual winner Regard, by Zabeel, making her a half-sister to the multiple Group 1 winner Atlantic Jewel, a daughter of Fastnet Rock.

Commanding Jewel was purchased by Brad Spicer for A$205,000 at the 2011 Magic Millions Gold Coast Yearling Sale from the Vinery Stud draft.

Flower did not expect the colt to break the seven-figure barrier but knew as the sale went on that he would make more than that.

"At the start of the sale I would have said (he would not reach) that, but looking at day one and yesterday and we did hit our limit," he said.

"I went one more bid than I wanted to but we wanted the horse. The client said we have to take him home."

Flower raced Australia's leading stallion Snitzel and has had a lot of success racing his progeny but said I Am Invincible's feats at stud were too hard to ignore.

"He is is probably one of the top three stallions," he said. "You have got Snitzel, Fastnet Rock and I Am Invincible. The way they are selling here they are paying big money, and he was the standout for us."

Adam White, sales and nominations manager for Vinery Stud, said the I Am Invincible yearling was a rare offering.

"The Commanding Jewel colt was another fantastic result for the team. Unfortunately, Regard died early in her stud career, so we have only ever sold three horses from this family and all at Magic Millions," White said.

"They have been Atlantic Jewel, Commanding Jewel and now this colt. He reminds us so much of his mother and, to a certain extent, Atlantic Jewel.

"All three have had the most unbelievable attitude. They all came out of their box and paraded so many times without any issues at all and handled it in their stride.

"The fantastic temperament goes a long way when they become racehorses, so I am sure he will perform very well for Damion and Brad when he hits the track."

So far at this year's sale, I Am Invincible has had 30 yearlings sell for an aggregate of A$15.2 million and an average of A$505,167 to be the sale's leading stallion.

Magic Millions managing director Vin Cox said Friday's trade was unprecedented at the Gold Coast Yearling Sale, with five lots selling for A$1m or more in one session for the first time.

With one night session of Book 1 remaining, which starts after the A$10m Magic Millions Raceday at the Gold Coast on Saturday, the aggregate sits at A$137m, an increase of A$17.5m on the same time last year. The clearance rate stands at 88 per cent.

FIRST PUBLISHED 1:14PM, JAN 12 2018
It was certainly a day to sell an I Am Invincible, but in fairness to the horse he was just a beautiful horse and all quality