Flintshire in demand at stud as relation Enable marches to greatness 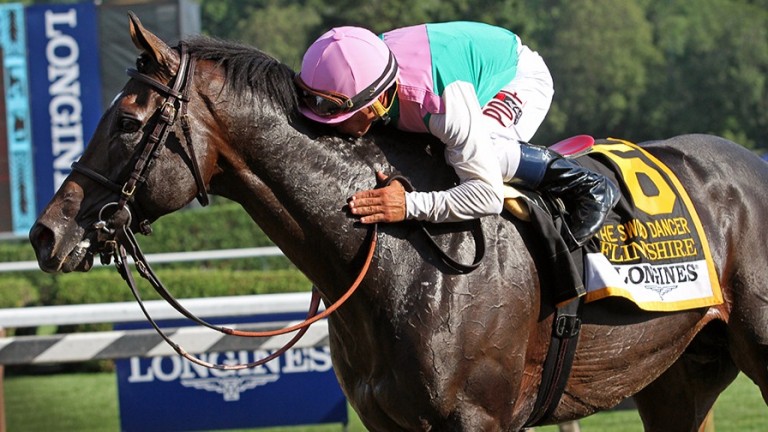 Well supported in his first season at Hill 'n' Dale Farm in Kentucky this spring, Juddmonte’s international star Flintshire will have a chance to become a leader in what some American breeders foresee as a possible new wave of turf-oriented sires based in the US.

After covering more than 120 mares, including some from the best Juddmonte families, Flintshire received another boost when his close relative Enable ran away with the King George VI and Queen Elizabeth Stakes over the weekend.

"It just shows what Classic brilliance there is in the pedigree," said Juddmonte’s American manager Garrett O’Rourke. "And that was the attribute that was most admirable about Flintshire. If he can reproduce that he will definitely be a very, very strong influence."

“We're offering him as a world-class turf horse. If there were any doubts or anyone needed any more evidence, there’s another example,” added Hill 'n' Dale president John Sikura of Enable’s victory.

A seven-year-old by Dansili, Flintshire is out of multiple Group winner and Prix de Diane runner-up Dance Routine, a Sadler's Wells sister to stakes winner Concentric, the dam of Enable. He stood his initial season for a fee of $20,000.

"We’re at the beginning stages of trying to re-establish America as a country where we can offer alternatives to European horses," Sikura said. “It’s really nothing new. Great turf sires were standing here in America in the past, but we sort of got away from that.

"It’s now time to re-establish turf sires because a lot of countries want those kind of horses for racing on the grass. There’s a void here and we want to try to fill that void."

Juddmonte purposely joined with Hill 'n' Dale in standing Flintshire, rather than standing the horse at its own Kentucky farm, to provide him with broad support, O'Rourke said. China Horse Club and SF Bloodstock joined a partnership in the stud career of the five-time Group/Grade 1 winner who prevailed at the elite level in France, Hong Kong and the US.

"It’s great to have people in leadership roles, like John Sikura, who see the opportunity and take the reins to make these horses successful," O’Rourke said.

"American breeders need to support turf racing more and it’s surprising to me that they don’t, considering the opportunities there are in turf racing [with big prize-money]," he added.

"Flintshire was so sound and honest that we just think he can be a very strong influence on a lot of mares who could use an injection of those qualities," O’Rourke said.

Hill 'n' Dale, Juddmonte and the other partners tried to select "excellent mares with strong turf bloodlines that we thought would suit the horse," Sikura said.

“It’s an exciting group of mares that should give him a great start to his stud career,” said Hill 'n' Dale general manager Jared Burdine. “All the shareholders - Juddmonte, SF, China Horse Club, Glen Hill Farm, St. Elias (Stable) and Hill 'n' Dale - sent top-class mares. And he was also supported by a diverse group of leading breeders.”

Sikura emphasised that - despite the current polarisation between breeding for dirt runners and turf horses - many sires and female families can produce high-quality runners on both surfaces.

Kentucky Oaks winner Blush With Pride, from whom descend European champion Peeping Fawn and American champion Rags To Riches, as well as prepotent sires like Danzig and Mr Prospector, are just a few examples.

“Sometimes we’re limited in our own understanding. But the horse is unlimited,” Sikura said. “Sometimes we don’t see the potential until we’re enlightened, but it’s always been there.”

American breeders have begun to take note of the global success on turf achieved by domestically-based stallions such as War Front and Kitten’s Joy, O’Rourke said.

Juddmonte will be at the forefront of the fledgling efforts Sikura mentioned regarding standing more turf-oriented stallions in America, since it has also retained an interest in Frankel’s brother, three-time Group 1 winner Noble Mission, who stands at Lane’s End.

"By the time horses like Flintshire and Noble Mission make a name for themselves, they could have a sort of monopoly at the top end among turf sires in America," O’Rourke said.

Sikura said the goal with Flintshire is to provide him with around 125 mares for each of the next few seasons so that he will "have a large enough representation to prove himself," particularly with the support of Juddmonte’s outstanding female lines.

The quality of mares bred to the horse has been outstanding so far, and Sikura said he expects that high-level support to continue, thanks to the partnership involved.

"I wouldn’t expect there is any horse standing for a fee of $20,000 anywhere in the world that is covering more mares that are Grade 1 winners or from Grade 1 families," Sikura said.

Enable emulates sire and grandsire and promises riches at stud

FIRST PUBLISHED 10:28PM, JUL 31 2017
We’re at the beginning stages of trying to re-establish America as a country where we can offer alternatives to European horses