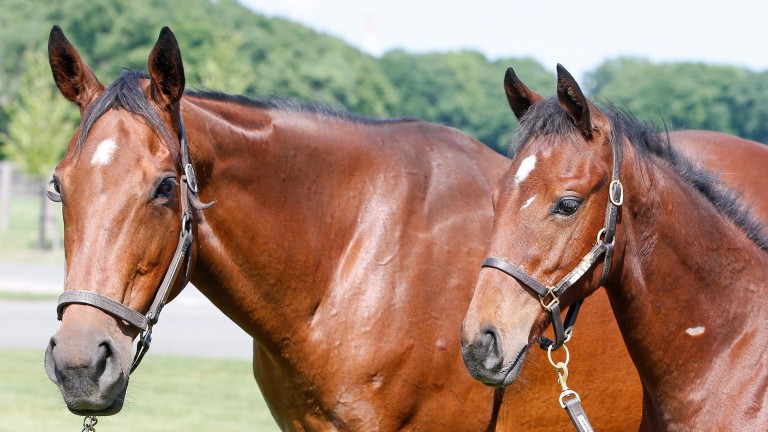 Celebrating its 20th anniversary edition with a seemingly unending flood of yen during a rapid series of bidding explosions, the Japan Racing Horse Association Select Sale wrapped up on Tuesday with its highest ever session total and a fifth consecutive record for turnover.

"This is more than unbelievable," said JRHA vice chairman Teruya Yoshida after a review of the figures showed a whopping 28 per cent increase in gross for the foal session and 16 per cent gain in overall spending at the two-day sale.

An elegant Deep Impact colt delivered on January 27 by Poule d’Essai des Pouliches winner Elusive Wave, by Elusive City, led the way in the foal session, selling for ¥580 million (around £3,949,580/€4,440,450), the second-highest price in JRHA history.

Yoshida credited his family’s investment in top international broodmares, a thirst for racing among new and established Japanese owners, increasing interest from foreign buyers and a superior catalogue for the results, and he was ready to ponder the possibility of continued growth in the future.

"We've reached a maximum point," he said before adding with a broad smile: "Perhaps that point will go even higher next year."

Deep Impact all the rage again

Mirroring results of the previous day's yearling session, sons of Deep Impact out of elite mares raced in Europe set the pace in the foal section of the auction. Prominent Japanese owner Riichi Kondo secured the Elusive Wave colt, who he said has the potential to become an internationally significant runner and a future sire.

The huge ¥580m price Kondo paid is the second-highest in the colorful history of the JRHA auction, behind only the ¥600m spent in 2006 by Globe Equine Management for a King Kamehameha filly foal later named Daoine Sith. That filly did not start but has become a broodmare for breeder Katsumi Yoshida's Northern Farm.

Even as the bids rose higher and higher for the Elusive Wave colt, Kondo did not hesitate in a long duel with another prominent owner, Hajime Satomi. Their unblinking commitment to spend millions spurred the crowd at the Northern Horse Park sale pavilion to burst into applause after the hammer fell.

"This horse had such an aura about him," Kondo said. "He has a great expression and way of moving, and since he is out of a Classic-winning dam, he has a great pedigree. He has everything. Regardless of the price, I thought I should buy him.

"I visited Northern Farm four or five times with my trainer, Yasuo Tomomichi, and both of us were determined to acquire this colt. I know that the JRHA sale is an international market and a lot of international buyers are coming here, and I felt we could not send such a treasure as this colt away from Japan.”

Kondo added six other foals to his account, spending ¥853m on the day. During the previous session he bought six yearlings for his stable at a cost of ¥292m, bringing his total spend to ¥1.145 billion.

Elusive Wave has proved an outstanding acquisition for top sale consignor Northern Farm, as her colt repeated the foal session-topping achievement of his brother at the 2016 JRHA sale, when Satomi prevailed at ¥280m.

Katsumi Yoshida acquired Elusive Wave and Group 1 winner Listen - who produced the ¥270m Deep Impact colt bought by Satomi on Monday - from Coolmore. MV Magnier paid 800,000gns for Elusive Wave, then four, at the 2010 Tattersalls December Sale. She produced a Galileo filly, Brandybend, in 2012 who went on to be Listed placed in Britain and France.

Elusive Wave delivered her first foal in Japan two years later, a filly by Frankel named Elusive Happiness who is unplaced in two starts, including her most recent effort in May, for Northern Farm-affiliated Silk Horse Club. Her second foal is a juvenile filly by Deep Impact named Elusive Grace. The mare is back in foal to the world’s leading sire by progeny earnings. 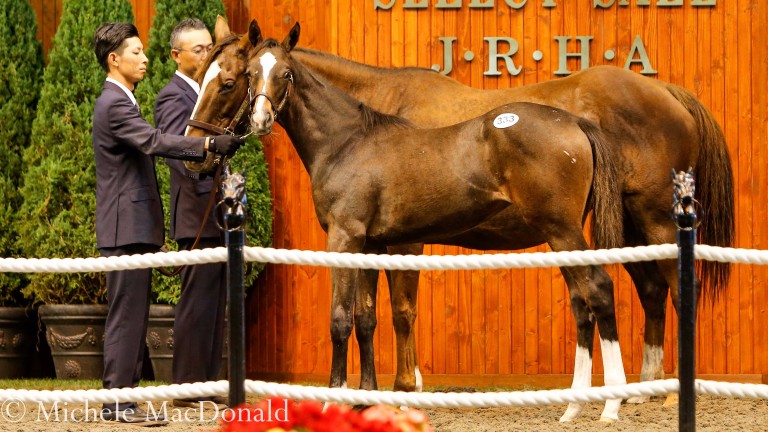 While the price of the Elusive Wave colt made the day's headlines, the sale of the sister to two-time Japanese Horse of the Year and Dubai Sheema Classic winner Gentildonna was also noteworthy. The ¥370m paid by DMM.com's Keishi Kameyama for the Deep Impact filly born on January 27 to Cheveley Park Stakes winner Donna Blini, by Bertolini, is the fourth-highest price in JRHA sale history.

That bid ranks behind only the prices for the Elusive Wave colt and the King Kamehameha filly in 2006 in addition to the ¥490m paid in 2004 by Fusao Sekiguchi for a Dance In The Dark colt out of champion Air Groove who became minor stakes winner Thesunday Fusaichi.

Takumi Nomoto, racing manager for DMM.com, said the company known for online shopping ventures will launch a racing club in August, and that Gentildonna's sister will eventually be part of the club's equine portfolio.

"Her pedigree is brilliant and I understand it is rare for Northern Farm to release this filly due to the quality of her breeding," Nomoto said, adding that he entered the bidding fray that had been dominated by Satomi and Makoto Kaneko after the filly had passed ¥200m mark.

"When I saw her at the farm, I noticed she had some scratches on her body and looked something like a tomboy, and I really liked that about her," he said.

Northern Farm had placed a ¥100m reserve on both Gentildonna's sister and the Elusive Wave colt but it was a given they would sell for far more.

Remarkably, the farm sold ten foals for at least ¥100m each during the session, adding to the dozen yearlings sold at that level. 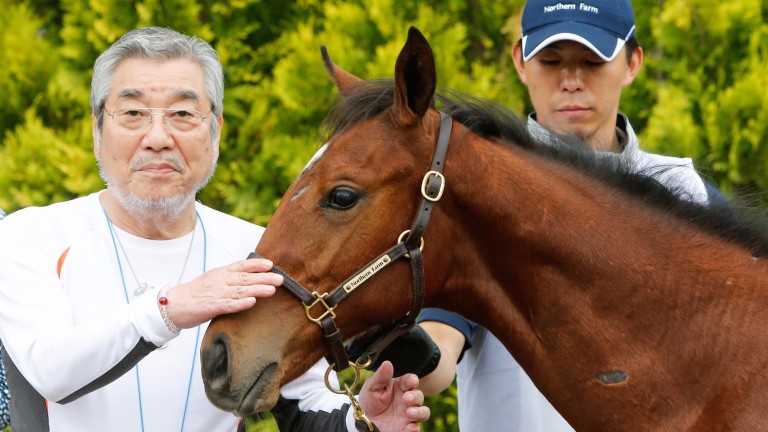 Records fall by the wayside

Overall, the 17 foals and 15 yearlings sold at or above the ¥100m level during the JRHA sale was another record for the auction.

The huge investments made by brothers Katsumi and Teruya Yoshida, who have spent over £78m acquiring outstanding mares from around the world, are paying off in the production of high-selling foals and yearlings and superior racehorses.

For example, Northern Farm's multiple Argentine Group 1 winner Malpensa, by Orpen, has produced Group 1 winner and Prix de l'Arc de Triomphe candidate Satono Diamond in addition to his brother by Deep Impact, who was the co-highest priced JRHA foal of 2016 at ¥280m.

Although international buyers struggle to grasp how millions can be paid for foals still at their dams' sides, the Japanese have had a long tradition of preferring to purchase foals for racing prospects. And, as strong as the record-setting JRHA yearling session was on Monday, the foal session was even more robust.

Chairman of Sega Sammy Holdings, Satomi bought 11 foals on the day to accompany his five yearling purchases. His other notable foal acquisitions included a Lord Kanaloa colt out of Australian champion Shamrocker for ¥180m; a Deep Impact colt out of Argentine champion Balada Sale for ¥165m; and a Deep Impact colt out of multiple Argentine Grade 1 winner Candy Nevada for ¥140m. Overall, Satomi spent ¥1.697 billion to rank as the sale's leading buyer.

Meanwhile, international buyers found the competition rugged since bloodstock values in Japan are a reflection of lucrative purses offered on the Japan Racing Association circuit, and most are not experienced at buying unweaned foals as racing prospects.

However, there were some who succeeded, including Sheikh Fahad Al Thani of Qatar, who had led all buyers at this sale in 2014 and whose purchases that year included German Group 3 winner Warring States, by Victoire Pisa. In 2013, Sheikh Fahad and his advisor David Redvers bought five horses at the JRHA sale, with the Victoire Pisa filly Pearl Code earning a Group 1 placing three years later.

Sheikh Fahad tempered his approach at this year's JRHA auction, buying two yearlings and three foals, including two foals from the first crop of 2014 Japan Cup winner Epiphaneia, for a total of ¥126m.

"We found it very, very difficult. We would have liked to buy five King Kamehamehas and seven Deep Impacts, but we didn't have the budget," Redvers said during a media conference. "We bought very racy horses by stallions we don't particularly know but we liked the individuals."

Another international buyer of note was Australian agent Robert Roulston, who signed tickets on behalf of Gerry Ryan for a Victoire Pisa colt foal from the family of Kentucky Derby winner Sea Hero and a Kizuna filly from the family of top Japanese dirt runner Vermilion. Ryan raced 2010 Melbourne Cup winner Americain in partnership.

"The prices here are very, very high, but they have some lovely pedigrees," said Roulston, who also bought a Real Impact filly for China-based Rifa Mustang.

FIRST PUBLISHED 6:51PM, JUL 11 2017
I visited Northern Farm four or five times with my trainer, Yasuo Tomomichi, and both of us were determined to acquire this colt