Crack jockeys, a comedian and the crown - the curious festival breeders 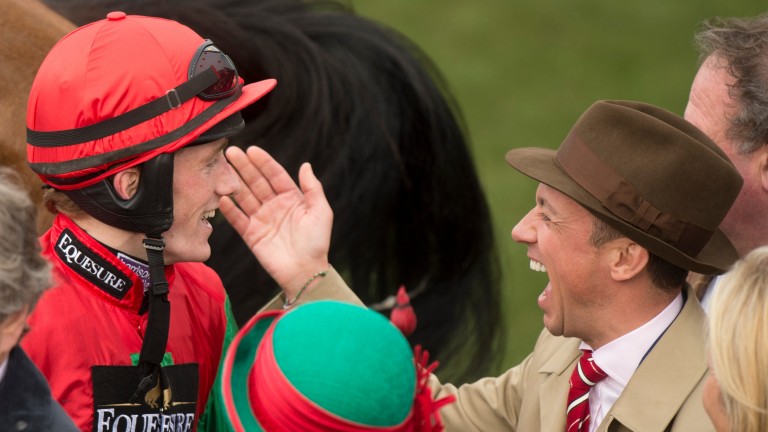 Breeders are arguably the unsung heroes of the Cheltenham Festival. Everyone remembers who rode and trained the legendary hurdler Istabraq, for example, but the names of those responsible for his mating would probably not trip so lightly off the tongue (it was Hamdan Al Maktoum's Shadwell operation, for the record).

Some breeders are past masters at producing horses who shine on the biggest stage in jumps racing. The Aga Khan might not intend to breed crack hurdlers and chasers but as he values stamina above here-today, gone-tomorrow precocity, there have been numerous horses culled from his stables who have landed big prizes at the festival – think Balasani, Dabiroun, Ebaziyan, Khayrawani, Nakir, Shamayoun, Shawiya, Zarkandar, Zaynar and so on.

Then there are the dedicated jumps breeders who can claim several horses on the Cheltenham roll of honour: the likes of Robin and Scarlett Knipe, responsible for Anzum, Master Oats and Thistlecrack, and Marie-Christine Gabeur, who gave the world Long Run and Master Minded.

But there are also some well-known members of the racing industry who might not have been expected to have bred horses who excelled at the festival in relatively recent times, or who could run well this year, and we run the rule over several of them here.

The master of Coolcullen is a prolific breeder, aiming for success on the Flat, but with so many horses produced it is only natural that some will find their way into the jumps sphere.

One of the more noteworthy offcuts from the Bolger breeding empire that has produced Classic winners Dawn Approach, Pleascach, Soldier Of Fortune and Trading Leather is Scolardy, the wide-margin winner of the Triumph Hurdle in 2002.

The son of Turtle Island was saddled by Willie Mullins – who is another graduate of the Bolger winner factory of sorts as, like so many leading horsemen and women, he served his time learning at the renowned owner-breeder-trainer's elbow.

You must have been wearing blinkers and earplugs if it escaped your attention that Dodging Bullets, winner of the Queen Mother Champion Chase in 2015, was bred by legendary Flat jockey Frankie Dettori.

The ebullient Italian donned a pinstripe suit and trilby to cheer on the son of Dubawi at Cheltenham and said after the race: “I bred him to win the Derby, now I'm here to cheer on the best jump horse of the year. I was shaking with emotion. It's a great feeling to be a part of it.

Dettori had no hard feelings about letting go of the top-notch two-mile chaser for little money, adding: “I had him at my place for 18 months before I sold him for 8,000gns... I'm the lucky mascot. I love it.”

Publicity shy Frank Dunne, a major shareholder in Ireland's largest indigenous retailer Dunnes Stores, earned his place in turf history when in 1983 he sent his filly Stanerra to Royal Ascot to win the Prince of Wales's Stakes and Hardwicke Stakes and later in the season to Asia, where she became the first European-trained winner of the Japan Cup.

Dunne, whose farm neighbours Ballymacoll Stud and was reported to be the buyer of that prestigious property when it sold last year, has also bred 2,000 Guineas hero Night Of Thunder and the Group 1-winning half-brothers Creachadoir – sire of Arkle hot favourite Footpad – and Youmzain.

He also bred the admirable My Tent Or Yours, runner-up in the Supreme Novices' Hurdle and three editions of the Champion Hurdle, by sending the Ballymacoll-bred Spartan Girl to Desert Prince. Astonishingly, the festival favourite was sold as a foal at Goffs for just €2,000.

Cornish funnyman Jethro has his fans rolling in the aisles with his near the knuckle humour, but his breeding ventures are serious business.

He once owned a large string of horses but is down to around three broodmares, including Flying Iris, no less than a sister to Best Mate, while the Classic-placed Celtic Swing stallion Rocamadour also belongs to him.

Among the best horses Jethro has produced are Jollyallan, a son of Rocamadour who finished eighth to Douvan in the Supreme Novices' Hurdle in 2015, and No Comment, a son of Kayf Tara who finished seventh in the Martin Pipe Conditional Jockeys' Handicap Hurdle at Cheltenham last year, was third in the Scilly Isles Novices' Chase last month and is around a 7-1 shot for the National Hunt Challenge Cup on Tuesday.

Breeding racehorses is in Richard Johnson's blood. His first winning ride under rules in 1994, Hereford hunter chase scorer Rusty Bridge, was bred, owned and trained by his grandfather Ivor, and his parents Keith and Susan run the family's Twyford Stud in Herefordshire.

The reigning champion jump jockey has his own mares too, and has bred with a degree of success. No Cheltenham winners yet, but Kayf Adventure – by Kayf Tara out of the winning hurdler My Adventure – has run well in competitive chases this year and could creep into the field for one of the handicaps at the festival next week.

Tidal Flow, a Black Sam Bellamy five-year-old bred by Johnson out of the winning Puissance mare Mrs Philip, could be a future festival winner judged on his impressive five-length victory – with the breeder in the saddle – in a Newbury bumper in November.

Aquarelliste, Bigstone, Helissio, Shake The Yoke and Westerner are just a handful of the brilliant talents that Elie Lellouche prepared in an illustrious training career, but he has also done a fine sideline in breeding good horses.

One of the best on the Flat he has produced is Prix de Malleret winner Never Forget, who is by his Gold Cup hero Westerner, while over jumps he is the man behind 2010 Champion Hurdle winner Binocular and the previous year's County Hurdle scorer American Trilogy.

Both horses started their careers in training with Lellouche before being bought to race in Britain. It is probably just as well that the homebred mare the trainer notoriously called Big Tits did not achieve enough on the track in France to warrant export across the English Channel.

It is no secret that Baron Lloyd-Webber's Watership Down and Kiltinan Castle Studs, overseen by his wife Madeleine, are outstanding sources of top-class racehorses: look no further than the multiple Group 1-winning fillies Dar Re Mi and The Fugue for proof.

But, as is the case with the Aga Khan, Frank Dunne, Elie Lellouche and other Flat breeders, products of the studs who did not quite make the grade on the level have found fame in the National Hunt sphere.

One of the best jumpers bred by Watership Down Stud was Sublimity, the shock winner of the 2007 Champion Hurdle. The son of Selkirk was bred in partnership with Stratford Place Stud, an operation owned by another doyen of the musical world, Chrysalis record label founder Chris Wright.

It is perhaps a good job Sir Anthony McCoy was not quite yet a fully-fledged premier league jump jockey by 1993, and was ruled out of riding during that year's festival due to injury anyway, as if he had competed in the County Hurdle he might have found his indomitable will to win compromised by the fact the victor, Thumbs Up, was bred by his father Peadar.

One of the first good horses owned by Michael Buckley, Thumbs Up was a son of Fidel bred by small breeder McCoy snr out of the Steeple Aston mare Misclaire, who was the first horse on which McCoy jnr ever sat, according to his autobiography.

Sir Anthony never got the leg up on Thumbs Up, who was brought down when going well in the 1994 Arkle and finished fourth in the following year's Grand Annual, but he did partner the gelding's half-brother Piper's Rock to win at Newton Abbot and Plumpton.

From two July Cup winners in Pastoral Pursuits and Sakhee's Secret, through an Oaks runner-up in Shirocco Star, to a Prix Royal-Oak scorer in Alcazar, Hughie Morrison has trained top-class horses over just about every point across the spectrum of Flat race distances.

The East Ilsley handler is also a man for all seasons, with a more than respectable record with jumpers, and he both bred and trained the 2002 William Hill National Hunt Handicap Chase winner Frenchman's Creek.

Marble Arch, who Morrison sent out to finish second to Hors La Loi in the Champion Hurdle at the same year's Cheltenham Festival, was bred by Morrison's wife Mary – as was 2016 RSA Chase hero Blaklion.

There was not much Lord Oaksey did not achieve in his long career in racing – riding numerous winners, including at the Cheltenham Festival, taking plaudits as a journalist and broadcaster and tirelessly working for the Injured Jockeys Fund – and he added another string to his bow posthumously when his homebred Coneygree landed the Cheltenham Gold Cup in 2015.

Lord Oaksey died in 2012 and Coneygree – trained by his daughter Sara's husband Mark Bradstock – was the result of him sending his Executive Perk mare Plaid Maid to Karinga Bay six years earlier.

Plaid Maid, who was saddled by Bradstock to win five races for Lord Oaksey, proved an excellent producer, as she also delivered Hennessy Gold Cup hero (and Cheltenham Gold Cup fourth) Carruthers and the useful Flintham.

The Queen has of course been a tremendous supporter of racing for seven decades and the Queen Mother was deeply passionate about National Hunt racing. So the fact that the Queen has bred Cheltenham Festival winners is not in itself surprising.

However, there was something rather noteworthy about Domesday Book, the winner of last year's Fulke Walwyn Kim Muir Challenge Cup who was bred by Her Majesty.

The son of Street Cry is out of the high-class Unfuwain mare Film Script, who holds the rare distinction of having produced winners at both the Cheltenham Festival and at Royal Ascot, as her son Free Agent carried the royal silks to victory in the Chesham Stakes in 2008.

The first woman to complete the Grand National – when eighth aboard Cheers in 1982 – may not appear under the breeder's name of 2009 Champion Hurdle winner Punjabi: that honour falls to her father, Captain Jim Wilson, but she was instrumental in the early life of the four-time Grade 1 scorer.

Rees saddled Punjabi to win three races on the Flat carrying Wilson's colours before he was sold to Highflyer Bloodstock for 42,000gns at the end of his three-year-old career and sent to Nicky Henderson.

Punjabi's dam Competa has come up with another good one in the Henry de Bromhead-trained Grade 3-winning chaser Attribution, who is entered for a few handicap chases at Cheltenham next week.

WATCH Tom Malone joins the bloodstock team to talk about his transition from jockey to agent, the thriving jumps market and some bold predictions for horses to follow

FIRST PUBLISHED 6:00PM, MAR 9 2018
Cornish funnyman Jethro has his fans rolling in the aisles with his near the knuckle humour, but his breeding ventures are serious business