At The Sales BBAG

Blandford Bloodstock signed for the lot offered by Gestüt Görlsdorf 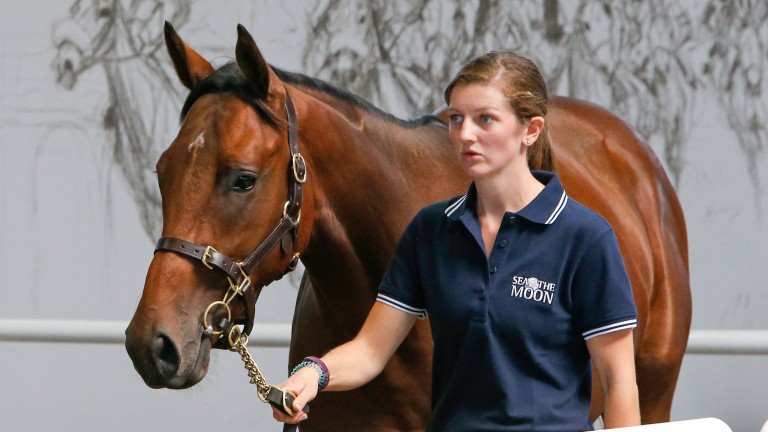 Heike Bischoff's effervescent affection for Sea The Moon has been returned yet again by the first-crop stallion, who delivered a €460,000 yearling colt during the BBAG sale in Baden-Baden on Friday.

"This is just amazing," Bischoff exclaimed after the sale of the colt bred by her Gestüt Görlsdorf to Godolphin. "This is huge money for a first-season sire who stood for a £15,000 covering fee.

"This is absolutely a dream - and it's always been a dream, ever since the birth of Sea The Moon. We were delighted by him and he's absolutely our golden horse. He is 'mommy's pet.' We love him so much."

A brilliant winner of the Deutsches Derby for Görlsdorf after failing to sell as a yearling at Tattersalls, Sea The Moon helped launch the stud career of his sire, Sea The Stars. Retired to Kirsten Rausing’s Lanwades Stud in Newmarket, the now six-year-old Sea The Moon is stamping his offspring with his athletic physique and unflappable demeanour, Bischoff said.

"They are really lovely athletes and have good hindquarters - good engines - and a lovely shoulder. They are very relaxed and they love to work, and they put muscle on very quickly," she said. "I really hope they will perform on the racecourse as well as they do now in the sale ring."

Görlsdorf has retained a major interest in Sea The Moon and has 30 yearlings by the stallion, who has 114 registered fillies and colts in his first crop.

Offered as lot 49, the Sea The Moon colt out of the Montjeu mare Favorite generated a prolonged bidding battle that involved several potential buyers, including Hong Kong-based agent Justin Bahen, in the buzzing BBAG pavilion. But Blandford Bloodstock's Tom Goff ultimately prevailed on behalf of Godolphin. 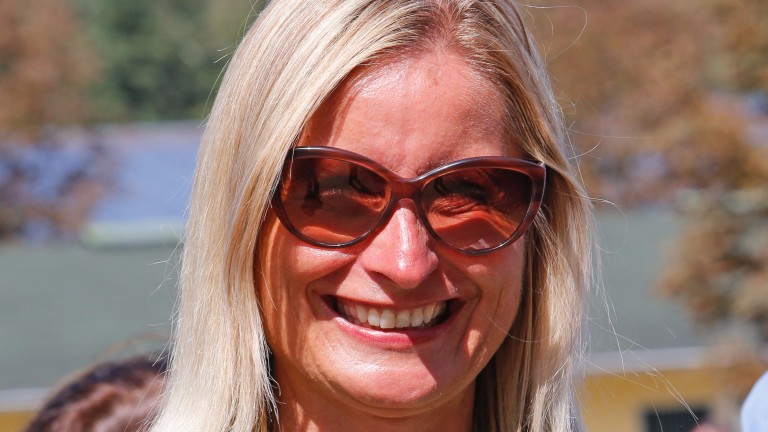 Heike Bischoff: "This is absolutely a dream - and it's always been a dream"
Michele MacDonald

A half-brother to Fun Mac, winner of the Prix du Carrousel at Maisons-Laffitte earlier in the year, the colt boasts a strong pedigree as his dam is a half-sister to the dam of German champion and Group 1 winner Floriot. That daughter of Monsun is now a broodmare for Teruya Yoshida's Shadai Farm in Japan.

"I thought he was an exceptionally nice horse," Goff said after signing the ticket. "Richard Brown, my partner, was the acquiring agent for Kirsten Rausing when [Sea the Moon] was [obtained for Lanwades]. He's a beautiful horse, very, very talented. We think he is going to be fantastic stallion."

Bischoff said the yearling colt was special from the day he was born on January 25, 2016.

"He is so much in the mould of his dad and he reminds me so much of him. Hopefully he will win the Derby as well," she said.

Sheikh Mohammed is a shareholder in Sea The Moon, and Godolphin's purchase of the colt is a further boost for the horse's stud career, Bischoff said.

An impressive group of breeders that also includes the Aga Khan Studs, Alain and Gerard Wertheimer, Shadwell, Rabbah Bloodstock, Ballymacoll Stud and Al Shahania Stud supported Sea The Moon during his first season at stud. In addition to being by Sea The Stars, Sea the Moon comes from a strong female family as he is out of the Monsun mare Sanwa, an unraced sister to multiple Group 1 Classic winners Schiaparelli, Samum and Salve Regina.

Yearlings in Sea The Moon's initial crop include several bred by Rausing, topped by a colt out of her homebred 2004 German Horse of the Year Albanova, by Alzao and a sister to champion Alborada. Rausing also has a yearling Sea The Moon filly out of Albanova's half-sister, Alba Stella, by Nashwan.

Görlsdorf also sold a Sea The Moon filly out of stakes winner Nouvelle Neige, by Big Shuffle, for €180,000 to agents Peter and Ross Doyle. The filly was acquired on behalf of top Norwegian-based trainer Wido Neuroth.

Gestut Gorlsdorf was leading consignor with 7 of 8 yearlings sold for €860,000.

King Con does it again! Sands Of Mali another for Bansha House

He shoots! He scores one of the best fillies in training in Europe

FIRST PUBLISHED 7:08PM, SEP 1 2017
He is so much in the mould of his dad and he reminds me so much of him. Hopefully he will win the Derby as well