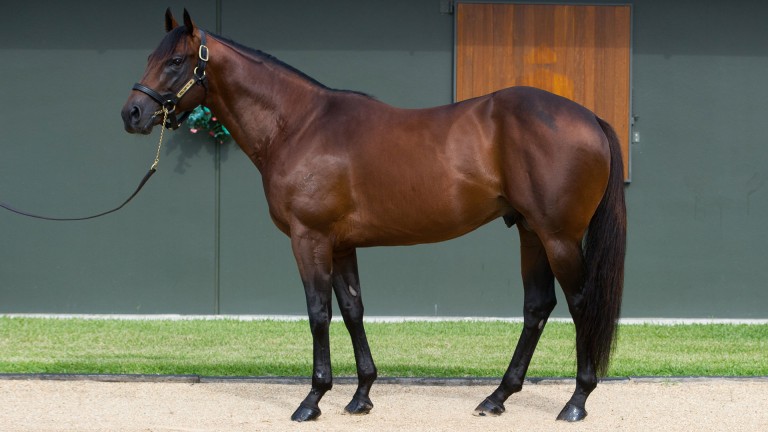 Spill The Beans: the first son of the all conquering Snitzel to stand in Europe
KATRINA PARTRIDGE PHOTOGRAPHY
1 of 1
By James Thomas UPDATED 7:08PM, SEP 25 2017

European breeders will have an exciting new option for the 2018 covering season as the Group 2-winning Australian sprinter Spill The Beans is to reverse shuttle to The National Stud in Newmarket.

The deal, which was brokered by McKeever and Ferguson Bloodstock in association with Atlas Stallions and Aquis Farm, ensures Spill The Beans becomes the first son of recently crowned Australian champion sire Snitzel to stand in Europe.

"His sire is quite remarkable," Philip Mitchell of The National Stud told ANZ Bloodstock News. "He was the champion sire of Australia last season and you can't ignore that. He's got to be one of the most exciting stallions Australia has seen for a long time. There's also the Danehill connection [Snitzel's grandsire], he was such an exceptional sire in Australia and came over here and proved himself to be equally brilliant, so I thought: Why not?

"I've seen a photograph of him and he's just the most lovely looking type with great conformation and I think he could be very exciting. He'll be priced at a very sensible fee."

Spill The Beans, who was bred and raced by Arrowfield Stud, went undefeated as a juvenile and brought the curtain down on his 11-race career as the winner of three Group races, including the Group 2 QTC Cup.

He is out of the Falbrav mare Miss Dodwell, making him a close relation to Group 2 winner Kenedna, while the likes of Group 1 winners Bounding Away and Glastonbury appear further back on his page.

"The demand for Australian speed is worldwide and the Snitzel factor is obviously a huge thing too." added Aquis Farms' Shane McGrath. "We haven't seen a stallion like Snitzel in Australia since Danehill and he broke or equalled pretty much every record conceivable last year.

"Snitzel seems to be possessing that speed trait that Australian's love and there is definitely demand for that everywhere, including Europe.

"Spill The Beans is a mirror image of his sire. He looks like Snitzel and he moves like a really good quality Snitzel, he's a great colour with a big hip - he's what Australian racing is all about. People are going to love him when they see him. He's good-looking with a huge action, which you don't always see in those speed stallions."

Snitzel fever has gripped Australia after the 2016/17 season saw the Arrowfield resident not only claim his first sires' title, but also equal Danehill's record of 26 Australian stakes winners and set a new record for progeny earnings, with his sons and daughters winning over A$16.2million in prize-money.

Spill The Beans is the second reverse shuttler new to the National Stud for 2018,  as he will join Tivaci, a Gorup 1-winning son of High Chaparral, who travels from Waikato Stud in New Zealand.

Snitzel steals the show during a blockbuster Australian season

For more on the Australian scene anzbloodstocknews.com

FIRST PUBLISHED 1:49PM, SEP 25 2017
The demand for Australian speed is worldwide and the Snitzel factor is obviously a huge thing too